Trump claims presidents can declassify documents ‘even by thinking about it

WorldWatcher said:
If there are no paper documents today (as opposed to the 70's) then what were the classified documents collected as a function of the search warrant in the MAL store room and in the FPOTUS's desk draw on August 8th with highly classified cover sheets and documents (evidence photo submitted to the court)?

Of course there are still paper copies of documents and multiple controlled copies in multiple locations.

I didn’t say hard copies didn’t exist. I said there arent a limited number of hard copies that someone catalogs and tracks. Im not sure where everyone got the idea that that’s the way things work in that world. Movies I suspect, but having worked in the IC my entire adult life I can assure you it doesn’t.

WorldWatcher said:
I provided a long post and you took the time to go through it and address different points, that is appreciated even though I definitely disagree with some of them. That is the nature of a discussion board.

However I will take exception to this one statement as it references me personally, no where does my posting indicate that I disagree with the concept that the President has ultimate classification and declassification if legally permissible. For example a President can't classify documents for strictly political gain
Click to expand...

I'm guessing that presidents of both parties classify things for political gain pretty frequently. If you could prove it, it could be an impeachable offense, if congress thought so, but I'm not sure there is a criminal statute that says that.

WorldWatcher said:
or to hide evidence of a crime.
Click to expand...


WorldWatcher said:
However when it comes to national security information as a function of government, I have no problem with the President having ultimate authority.

However for something to actually be classified or declassified the President cannot secretly and mentally do it. (S)he must tell someone so they can execute a legal order or document such classification or declassification actions again so that the procedures as it impacts derivative (yes, better word then subordinate - thank you.) classified information.
Click to expand...

Or just put them in his briefcase and take them himself.

He doesn't have to explain himself to anyone - when it comes to classification and declassification - because he is the president.

Just like Biden does when he takes documents to his beach house. There is no ceremony where Biden announces the temporary declassification of each document.

All this was decided by the USSC. The debate on here is between people who accept that truth and people who do not.

(Note I use "ultimate" and you use "sole". There are others with legislative authority under the law and via the EO who have classification and declassification authority, so I use ultimate meaning the highest level.)
Click to expand...

You're not wrong to use ultimate, but it is just as correct to say "sole." In particular because as my upstream article stated about the Obama administration, far to many subordinates take it upon themselves to put classification stamps on material that the president has not ordered classified.

That is a problem under administrations from both parties for at least the last thirty years.

Seymour Flops said:
More than a little ironic that those who profess not to understand that a president has sole authority over classification and that if he thinks a document is declassified, then for his purposes it is also profess to believe that a person can change their sex by mere "thinking" that they are now female.
Click to expand... 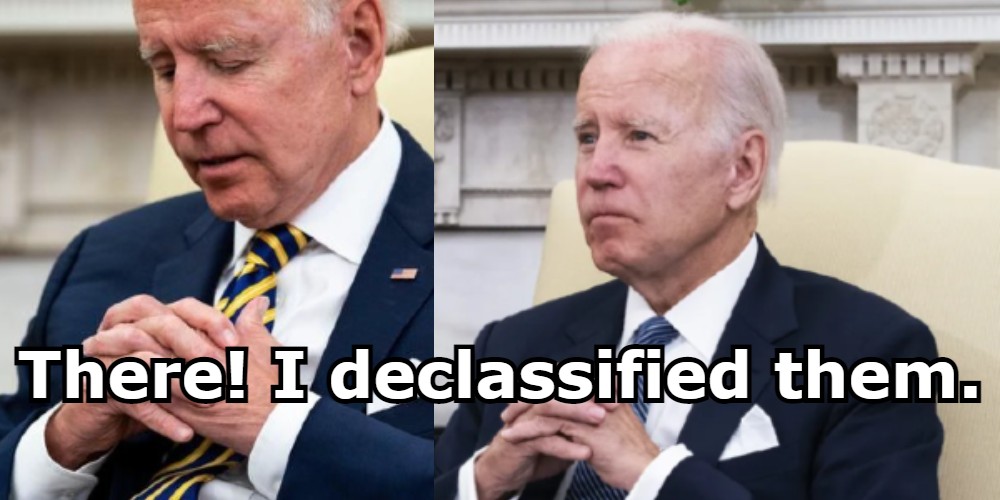 Even more from Dark Brandon...

More made up shit because the truth eludes you.
S

Seymour Flops said:
More than a little ironic that those who profess not to understand that a president has sole authority over classification and that if he thinks a document is declassified, then for his purposes it is also profess to believe that a person can change their sex by mere "thinking" that they are now female.
Click to expand...

You guys got it all wrong, He does it like this:

Active member
TSOG
Trump Special Operations Group
*This post contains content that some viewers may find disturbing. Intended for conservative audiences only. Viewer discretion advised.*
My pronouns are Yo', Dude, and Bro.

Stann said:
I believe you should actually read ( and hopefully comprehend ) Executive Order 12356 of April 2nd., 1982. It covers all the classification and declassification regulations. You keep saying the president has sole authority over classification, that is not true. The president, the vice president, agency and department heads all can classify and declassify government documents. One person couldn't handle the workload. In 2014 alone the government produced 77.4 million classified documents.
Click to expand...

Yup, but let’s pretend he wants to reclassify material and assume he has the authority to do so.

Even if the president did, it has to be relabeled and dated and relocated in the archives. It isn’t like a president can change a classification……then keep it a secret. That’s bull shit and not the proper procedure.

Trump by his own admission did no such thing as he did it in his mind, then declared, they were his to keep after he took them. Of course he took them AFTER he had left office on his way out the door. So he is a crook committing a federal crime and is without a pardon.

Let’s assume the right’s story about presidential authority is true, and while president Biden can do anything he wants. Biden is president, he just pardon himself for having the documents and tells the right to kiss his ass. I’m fine with that.
Last edited: Jan 16, 2023

Stann said:
I believe you should actually read ( and hopefully comprehend ) Executive Order 12356 of April 2nd., 1982.
Click to expand...

Active member
TSOG
Trump Special Operations Group
*This post contains content that some viewers may find disturbing. Intended for conservative audiences only. Viewer discretion advised.*
My pronouns are Yo', Dude, and Bro.

At destroying the US economy.
Progressives are boring

Indeependent said:
At destroying the US economy.
Click to expand...

From what ? The recession Trump left ?
You must log in or register to reply here.

Say Only What We Want to Hear, or We Will Take Away Your Livelihood

Can Biden Re-Classify Trump's Documents By Thinking About it??
2 3

Schiff: Trump Thinking He Can Declassify Without a Process Shows How Dangerous He Is
11 12 13

L
The Biggest Politician to Pander to Blacks….and Why
3 4 5