The War on WikiLeaks and Assange

Italian journalist Stefania Maurizi, who now reports for La Repubblica and has worked on WikiLeaks’ releases of secret documents, complains that her recent interview with Julian Assange was distorted by the Guardian, the Washington Post and others to assign Assange a pro-Trump agenda.

The Guardian recently “amended” its reporting on her interview with Assange, but for the feisty, seasoned reporter it wasn’t nearly enough. “I appreciate the Guardian amending the article, but at the same time the damage is done and I’m not convinced it was a solution,” she said.

Maurizi is going to court in September in Great Britain to fight for the release of key documents that related directly to the process of Assange’s treatment and his pursuit by various governments collaborating to shut his operations down.

“This is the first time that a reporter has tried to get access to these files,” she said in a rare interview on Aug. 1, “which tells you something about the state of journalism these days.”

Before joining la Repubblica, Maurizi spent ten years working for the Italian newsmagazine l’Espresso. Maurizi also partnered with Glenn Greenwald to reveal the Edward Snowden files as they pertain to Italy. She is author most recently of Dossier WikiLeaks.

Dennis Bernstein: Tell us about your multiple struggles to get key documents that will shed light on the entire Assange affair.

Stefania Maurizi: I have spent the past two years struggling to access the documents on the Julian Assange case. I was finally forced to go to court and sue the UK government to get them to hand over the documents. This is the first time that a reporter has tried to get access to these files, which tells you something about the state of journalism these days.

Dozens of newspapers have talked with Assange over the past ten years and yet no one has attempted to get full access to these documents about the case. Here we have a high-profile publisher who is being arbitrarily detained by two of the most respected Western democracies, Sweden and the United Kingdom, and no one is trying to get to these documents. It is incredible to me.

Randy Credico: Are any newspapers in London writing amicus briefs on your behalf?

SM: Honestly, I don’t know. I can imagine there is some embarrassment about the fact that no newspaper has yet asked for these documents.

DB: What kinds of information do you expect to be in these documents? What could be the case in terms of freeing Julian Assange?

SM: First of all, I want to access the full correspondence between the UK authorities and the Swedish prosecutors. In 2015 I filed a Freedom of Information Act request and I obtained some documents from the Swedish authorities which made very clear that the UK put pressure on the Swedish authorities not to question Mr. Assange in London, which he and his lawyers had requested, but rather to extradite him to Sweden. This is why we have been in this legal quagmire for five years now with Julian stuck in arbitrary detention at the Ecuadorian embassy.
The War on WikiLeaks and Assange

It was a lot too late which the Guardian knew.

Assange is not some libertarian euroweenie who loves America. He is a leftist, and opposed American foreign policy of intervention.

He only exposed the DNC because they screwed Bernie supporters.

That is really the central issue, but the media and DNC manipulated the narrative. Instead it's all about some conspiracy there is no evidence of.

Assange is a great study about how a totalitarian government develops its apparatchiks and methods. He is the target and as long as he is protected, we can study the behavior of consolidating governments.
A

the war on Assange is now under reported big news
A

the war on Assange is headline news now
A

How Julian Assange Extradition Will Be Decided in U.K. | Time
By Billy Perrigo
May 14, 2019

With WikiLeaks founder Julian Assange likely about to face two separate extradition requests — one already ...
A

Ecuador withdraws Julian Assange’s asylum status...SUCH A ROGUE NATION is EQUADOR with a shady government playing into the worst attributes of the United States government.
A 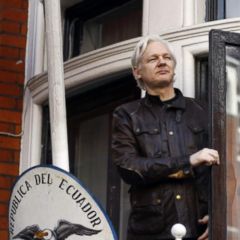 
Wikileaks: Ecuador 'to hand' Assange belongings to US
BBC News-May 20, 2019
Ecuador has seized some of Wikileaks co-founder Julian Assange's possessions left behind following his stay in its London embassy. 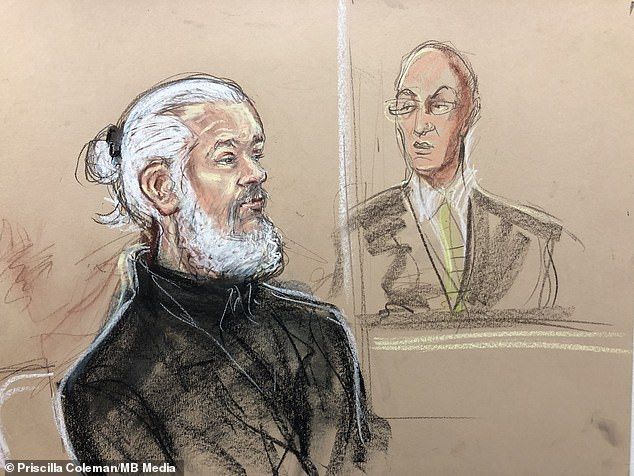 Sweden begins tug of war with US to charge Assange - PressReader

50 mins ago - Sweden has taken the first step towards seeking Julian Assange's extradition, laying the ground for a fight with the US over the fate of the Wikileaks founder.
A 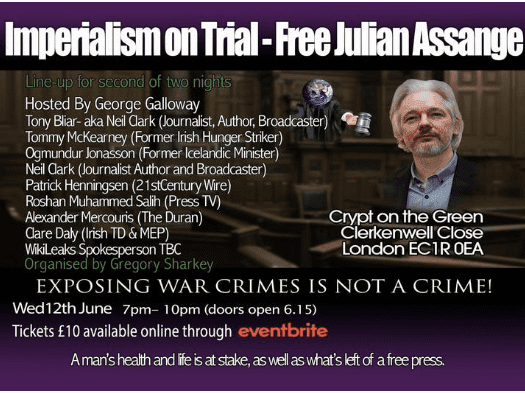 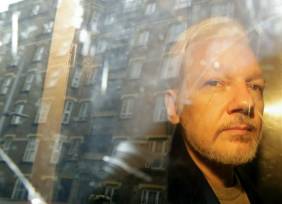 June 11 2019 The Guardian
Julian Assange: US charges expected to be revealed at hearing

The US will detail all the charges against the WikiLeaks founder, Julian Assange, when it seeks his extradition in a London court, the editor-in-chief of the whistleblowing website has said.

“The American authorities, the Department of Justice, will present the evidence in support of their extradition demand,” Kristinn Hrafnsson said.

The US justice department confirmed on Tuesday it had submitted a formal extradition request. The 47-year-old Australian is not expected to attend Friday’s hearing but could take part from prison via video-link, although it will be largely procedural.

The “first real confrontation of arguments” in court will not be for several weeks or months, Hrafnsson said.

He was arrested by British police in April after Ecuador finally withdrew his asylum and is now serving a 50-week prison sentence for violating his bail conditions.

The US has accused Assange of violating the US Espionage Act by publishing military and diplomatic files in 2010. The 18 charges against Assange reject his claim he was simply a publisher receiving leaked material, which would be protected under press freedom legislation.

Hrafnsson said the charges were “very revealing about the nature of this entire case”. He said the Espionage Act was part of an “archaic legal framework ... and has never been used against a publisher and a journalist”.

“It’s an indication of the watershed moment that we are now seeing in the attack on journalism,” he said.

Assange is being detained at Belmarsh high-security prison in London, where he has been transferred to a medical unit due to concerns about his health.
Last edited: Jun 12, 2019
A

https://advox.globalvoices.org/.../police-raids-on-major-media-organisations-expose-l...
5 days ago - Raids by the Australian Federal Police (AFP) on members of two of the country's largest media organisations have caused a furore down under. On 4 June 2019, ...

AUSTRALIA
Australia has good public media but the concentration of media ownership is one of the highest in the world. It became even more concentrated in July 2018, when Nine Entertainment took over the Fairfax media group.

SYDNEY MORNING HERALD
Raids ignite a firestorm that's here to stay https://www.smh.com.au/politics/fed...torm-that-s-here-to-stay-20190612-p51wzo.html via @smh
CHINA
China's leading investigative reporter says he can't work there any more
The departure of Liu Wanyong represents the end of investigative journalism in China under the pressure of Communist Party orthodoxy
News of two foreign journalists missing in Saudi Arabia
May 20, 2019
Last edited: Jun 12, 2019
A

Apr 11, 2019 - Donald Trump made no secret during the 2016 campaign that he appreciated WikiLeaks and founder Julian Assange for publishing thousands of ... Stone has pleaded not guilty and has denied that he worked with WikiLeaks. 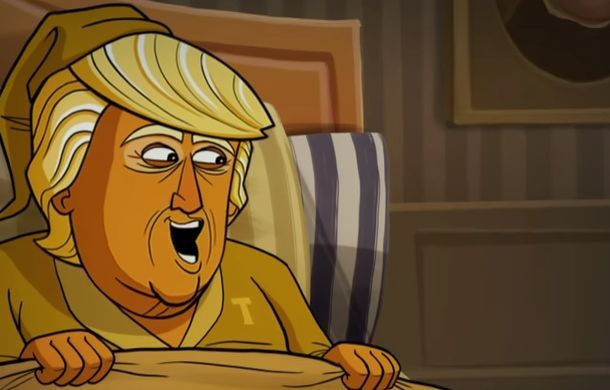 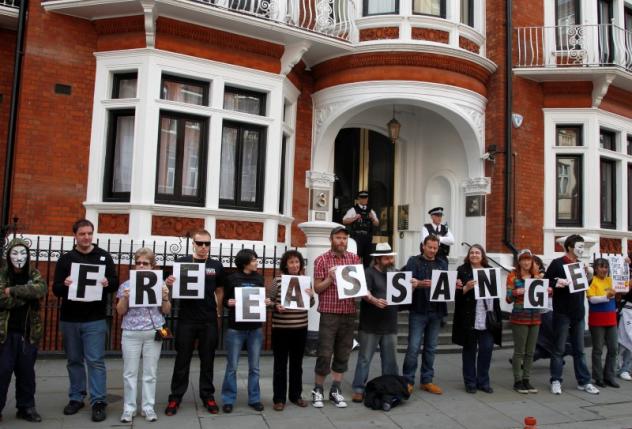 AZGAL said:
Sweden begins tug of war with US to charge Assange - PressReader

50 mins ago - Sweden has taken the first step towards seeking Julian Assange's extradition, laying the ground for a fight with the US over the fate of the Wikileaks founder.
Click to expand...

There is no fight between Sweden and the US for Assange. The only reason Sweden is seeking to extradite him is to deliver him to the US.
You must log in or register to reply here.

Joe Biden says he will make everyone wear a mask

Vienna. How NWO 'police' and a death 'church' fight believers and serve Satan.

Why you should probably not hold BLM marches on I5

I Could Have Sworn I Saw a Smile of Approval on the Faces of Washington, Jefferson, Lincoln and TR When Trump Spoke
2 3