The Truth About America's Employment Rate

Less that one half of Americans are employed full-time


All the phoney numbers and claims aside, the truth is that our economy sucks and more and more of us are feeling it where it hurts – in our pocketbook.


The Obamabots will instantly attack this as being from a “mere blog” without trying to actually refute what it contains.


Does that surprise anyone?

How many are supposed to be employed?

rightwinger said:
How many are supposed to be employed?
Click to expand...

Take out the old, young, disabled and what do you have left?
P

longknife said:
Less that one half of Americans are employed full-time


All the phoney numbers and claims aside, the truth is that our economy sucks and more and more of us are feeling it where it hurts – in our pocketbook.


The Obamabots will instantly attack this as being from a “mere blog” without trying to actually refute what it contains.


Does that surprise anyone?


Read the article @ Doug Ross Journal THE REALITY BENEATH LOW UNEMPLOYMENT PROPAGANDA Less than half of adult Americans are employed full-time
Click to expand...

What about the official numbers are you claiming is phoney?

As for the article in the OP that less than half of adult Americans are employed full time and trying to portray the 44.1% in January as disasterous...let's see what Gallup says:
U.S. Payroll to Population Rate 44.1 in January

The U.S. Payroll to Population employment rate (P2P), as measured by Gallup, was 44.1% in January. This is statistically similar to the 44.3% measured in December, but it is the highest measurement of P2P for any January since Gallup began tracking the metric in 2010. January is typically one of the lowest months for P2P in any year.
Click to expand... 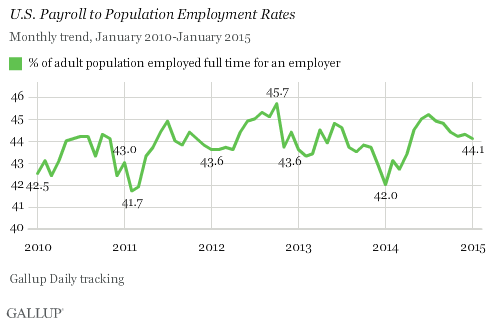 In the past 12 months, the highest labor participation rate was 62.8 percent in February and May 2015; the lowest was 62.4 percent in September 2015, and that 62.4 percent was the lowest in 38 years. The Bureau of Labor Statistics says the economy added 242,000 jobs in February (compared with a revised 172,000 in January), and the unemployment rate was unchanged at 4.9 percent for the second month in a row.

In February, according to the Labor Department's Bureau of Labor Statistics, the nation’s civilian noninstitutional population, consisting of all people 16 or older who were not in the military or an institution, reached 252,577,000. Of those, 158,890,000 participated in the labor force by either holding a job or actively seeking one. The 158,890,000 who participated in the labor force equaled 62.9 percent of the 252,577,000 civilian noninstitutional population. Among the major worker groups, the unemployment rates for adult men (4.5 percent), adult women (4.5 percent), teenagers (15.6 percent), Whites (4.3 percent), Blacks (8.8 percent), Asians (3.8 percent), and Hispanics (5.4 percent) showed little or no change in February.

On the negative side, average hourly earnings for all employees on private nonfarm payrolls declined by 3 cents in Feburary to $25.35, following an increase of 12 cents in January. The Labor Department reported on Thursday that initial claims for unemployment insurance have been below 300,000 for a solid year. The last time this happened was in December 1973. In the first half of 2009, more than 600,000 laid-off workers were applying for unemployment insurance benefits each week.

Another Labor Department report noted that in 2015, annual average unemployment rates decreased in 47 states and the District of Columbia; increased in 2 states; and were unchanged in 1 state, the U.S. Bureau of Labor Statistics reported last week. North Dakota had the lowest unemployment rate -- 2.7 percent in 2015, followed by Nebraska and South Dakota -- 3.0 percent and 3.1 percent, respectively. Nevada and West Virginia had the highest jobless rates among the states at 6.7 percent each. The District of Columbia had a rate of 6.9 percent.

He pointed to several "troubling trends." “Workers in their older years are returning to the workforce in greater numbers than prime-age workers, as the largest employment increase occurred among those 55 and older," Coats said. According to the February unemployment report, released on Friday by the Bureau of Labor Statistics, 34,186,000 people, age 55 and older, were employed in February 2016, 4.27 percent (or 1.4 million) more than the 32,786,000 employed in February 2015.

Among people in their prime working years (ages 24-54), 97,736,000 were employed last month, 1.2 percent (or 1.16 million) more than the 96,572,000 employed in February 2015. Coats also noted that the amount of long-term unemployed, defined as those looking for work for 27 weeks or longer, increased as a percentage of the unemployed in February.

Turning again to the February jobs report, the number of long-term unemployed was 2,165,000 in February, the fourth consecutive monthly increase. Last month, these individuals accounted for 27.7 percent of the unemployed. Coats said he'll continue trying to "pursue legislation that decreases our debt, reduces overly burdensome regulations on employers and overhauls a tax code that is holding back our potential." On a related note, jobs were among the topics raised at a hearing of the Joint Economic Committee this past Wednesday.

Jason Furman, chairman of the White House Council of Economic Advisers, told the panel that increasing automation will continue to affect lower-skilled workers as their jobs are replaced by advances in technology. "What we should be doing in this regard is making sure people have more skills to take advantage of, so they're complementing the innovations, benefiting more from them; (and) making sure we have a labor market that's better at moving people from job to job. (Here he plugged the president's wage insurance proposal to protect people who move from higher wage to lower wage jobs).

The unemployment rates for whites, Blacks, Hispanics, and Latinos were seasonally adjusted and for workers age 16 and older. Young workers, ages 16 to 19, had an unemployment rate of 15.6%.

The BLS also reported that the more expansive analysis of the unemployed, the U-6 number, showed tha national unemployment rate was 9.7% in February. The BLS defines the U-6 data as "total unemployed, plus all marginally attached workers plus total employed part time for economic reasons, as a percent of all civilian labor force plus all marginally attached workers."

Far More Than Twice As Many Private Sector Jobs Created Under Carter, Clinton And Obama Than Reagan, Bush And Bush | Eclectablog
So this is a good moment to remind ourselves that workers doing better under a Democratic president isn’t a fluke or anomaly — it’s been the rule for most of the last century.
OP

I wonder how many older workers are going back to work because the economy sucks and they're having one hell of a time getting by.

And I'll bet employers are thrilled to death to get workers who can read, write, and actually add stuff up in their heads.

With the dumbing down of Americans, today this means success. 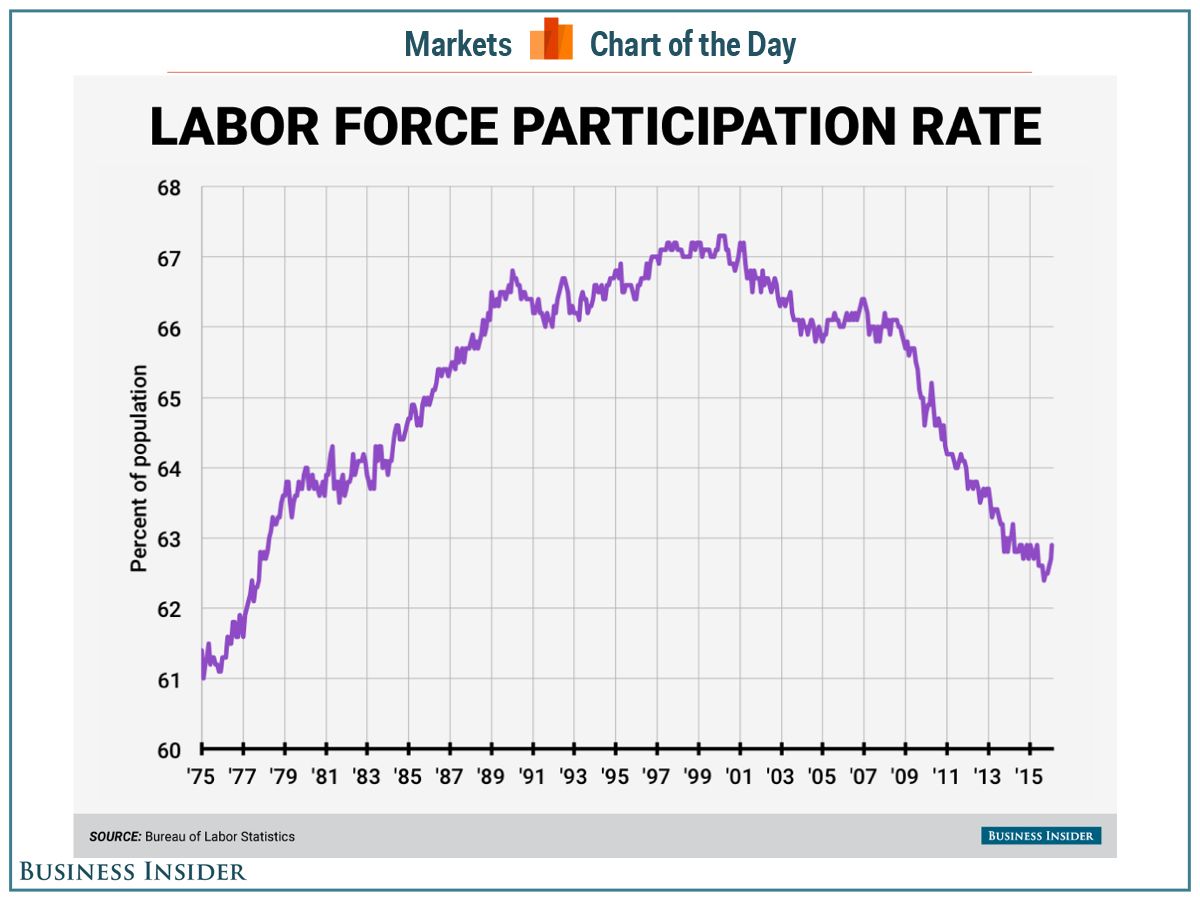 What is the difference between capitalism and corporatism?

A moment ago
Meathead
M

5
Assault Weapons Ban would be unconstitutional. "A State Militia must be maintained and well regulated"
41 42 43