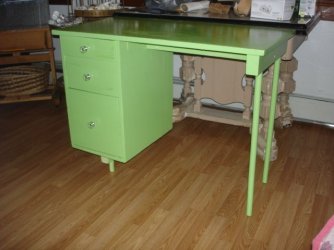 I decided to spiff up my old mahogany stained
plywood worn out desk...I made this desk when I was 16-17 years old.
Last edited: Nov 8, 2012
freedom of spirit...

Nice job! Do you have any "before" pics?
"Democrats haven't been this angry since the Republicans freed their slaves"
- Reddit
OP

I should have taken a photo, I'll be restoring a bookcase of the same color and period and take a before shot and post it..
freedom of spirit...

pbel said:
View attachment 22380I decided to spiff up my old mahogany stained
plywood worn out desk...I made this desk when I was 16-17 years old.
Click to expand...

I think you should make it a museum piece by painting one of your gorgeous works on a side panel, take a picture and add an acrylic cover to protect it under heavy use. That would make it a fortune someday for one of your children if times ever got tough, maybe.

I bet you have a picture of it you dont remember if you have had it that long.

The introduction of this new principle of representative democracy has rendered useless almost everything written before on the structure of government; Thomas Jefferson

Maybe that would be a good place for your scarlet macaw if you didn't want to waste good canvas on it.

freedombecki said:
Maybe that would be a good place for your scarlet macaw if you didn't want to waste good canvas on it.

Your scarlet Macaw is in process in my head...I've looked at a dozen photos, only a couple I like...I may intergrate the two into one painting...if you have any favorites, post them.
freedom of spirit...

pbel, I posted 15 pictures down in the Latin America Ornithology forum of Scarlet Macaws for your perusal. I didn't know which version you would like, so I went after photos that showed explicit details of ventral and dorsal colorations and as many side shots as I could. I was hoping it would help you know the colorations well enough to do a composite, not knowing your style, only mine.

I did an applique work of a Resplendent quetzal a few years back after saving and inspecting 30 pictures, but I didn't know exactly what I was doing till it was finished. In order to do an applique, one must almost be a cartoonist to simplify lines yet make them true enough that people will get the feeling of what one bird really looks like. It's huge, and my husband's dementia kicked in before I could get him to make a photograph of it. The old computer went gunnysack, and the repair guy decimated every file on the computer. You really have to be careful about recovering files when you pay someone else to fix a computer. He ruined my artwork files, so I don't have a fraction of my work recorded anywhere else. The problem I took him--a burned out lightbulb did not justify his destruction of my files, imho. He destroyed 10 years of my life's works. Quilts are given away to charities or sold. If you don't have backup pictures, you can't show your stuff.

Oh, and pbel, I think you should still consider putting a painting on your furniture. Your work is absolutely terrific. You deserve to have your beautiful work to look at around your home and priceless objects for your heirs. Just sayin' some more...

My own design Iphone Case

Have you guys checked this out?