Plight of the disabled in Africa

Handicapped s-l-o-w-l-y getting a better life in Africa...

African Nations Slowly Improve Conditions for Disabled
November 13, 2015 — Recently, Judith Heumann did something in Ethiopia that, just a decade ago, would have been impossible for her.

She took a train ride. “I was in Ethiopia last week; I … [was] able to take a ride on the new light rail system, which enabled me as a wheelchair user to be able to get on the train,” she told African journalists during a recent briefing via teleconference from Washington. Heumann, who is the United States' special adviser on international disability rights and who suffered a bout of childhood polio, said this small joy is one of the tangible signs that African nations are working to improve the lives of their disabled citizens. Change has come slowly, she said, but meaningfully. 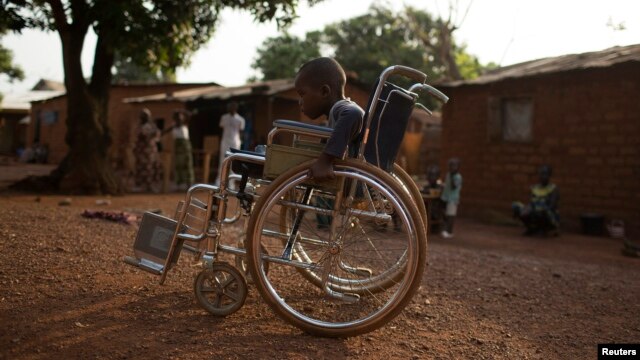 Giovanni Mougounou, 10, who lost both legs in April 2013 to what his family say was a rocket-propelled grenade launched by Seleka fighters on a church, pushes his wheel chair in the Boy Rabe district of Bangui, Central African Republic​
Kenya recently hosted the first general assembly of the African Disability Forum, and South Africa is currently marking Disability Rights Awareness Month by having Cabinet members weight a proposal to advance rights of disabled South Africans that would have binding commitments. South Africa’s social development minister, Bathabile Dlamini, said such moves will only strengthen South African society. "Empowerment is identified as a core cross-cutting theme for enabling persons with disabilities to avail of and access all socioeconomic development opportunities and rights that exist,” she said.

At least 15 percent of the world’s population is disabled, according to the World Health Organization and World Bank. That’s at least 1 billion people around the world — and they continue to face major challenges, Heumann said. “Frequently in countries in Africa and around the world, we see that disabled individuals are highly stigmatized, and that stigmatization, I believe, also is one of the significant causes of people being marginalized,” she said. “When people do not believe that disabled individuals are capable of making meaningful contributions to their communities, then they are not necessarily looking at the types of laws and programs that need to be put in place.”

Very interesting. In a region of rampant and absolute corruption, some minority rights emerge, such as disability considerations. Could support a social study thesis.
You must log in or register to reply here.

Effects of colonialism on Africa's past and present
2

How India Could Transform Africa

Why won’t Merrick Garland release the affidavit for the Mar A Lago invasion?
14 15 16