Our troops will get over 131 tons of food for Thanksgiving 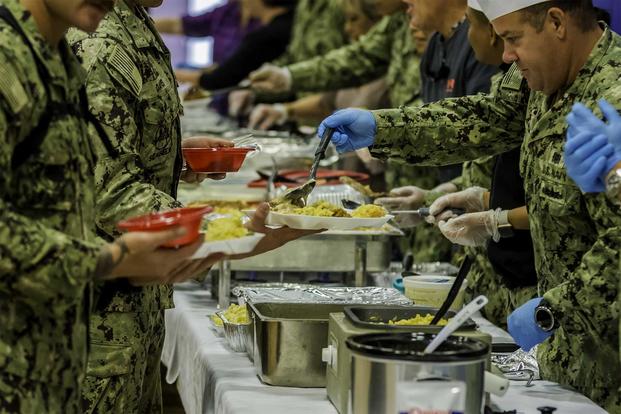 The DoD is also sending these main dishes downrange:

This year's total Thanksgiving fixings are significantly higher than that of three years ago, which was more than 63 tons.

In addition to turkey and other meats for this year's holiday feast, the Department of Defense has sent the following fixings to the frontlines:

These holiday rations will go to field kitchens, dining facilities and galleys for troops in the Middle East, Europe, Africa, Korea, Japan, Qatar and Honduras.

And we got the president serving the troops aat Bagram Air Base.

I grew up in homes where Thanksgiving meals were big affairs with lots of people. So, I dreaded my first one in the military and was quite pleased when it turned out to be a big deal. It was the same cooks and place as always but somehow different. I know just how much having a meal like that means to troops far from home.
Stories about the fact and fiction of California history @ Saint Junipero Serra's Legacy
Life in the military and other items @ A Soldier's Stories
I voted for President Trump and am proud of it!

The best omelette I ever had was on Camp Pendleton...the Marines can cook baby.....

Gallagher and the Picture

Troops Abroad to Get More Food This Thanksgiving

Democrats Wont Do it, but It's Time

‘Burden Is on the FBI to Justify’ Mar-a-Lago Raid, Prove It Wasn’t ‘Politically Motivated Witch Hunt’
12 13 14