On its way to Pluto and Charon, NASA's New Horizon spacecraft took this "movie" of the volcano Tvashtar on Jupiter's moon Io. This moon is the most geologically active place in the solar system: more than 400 active volcanos. Io orbits close to Jupiter and the gravitational tides cause internal heat and the resultant volcanism. Io is a hellish place, bathed in high energy radiation and infested with sulfur spewing volcanos. It will be a very long time, if ever, before humans venture to the surface of Io. Some other moons of Jupiter are more hospitable, including Europa which has a water ocean covered by ice. Who knows what is in that ocean? It will probably be decades before we find out, but even now NASA is working on autonomous underwater robots: http://www.underwatertimes.com/news.php?article_id=12593648010

This five-frame sequence of New Horizons images captures the giant plume from Io's Tvashtar volcano. Snapped by the probe's Long Range Reconnaissance Imager (LORRI) as the spacecraft flew past Jupiter earlier this year, this first-ever "movie" of an Io plume clearly shows motion in the cloud of volcanic debris, which extends 330 kilometers (200 miles) above the moon's surface. Only the upper part of the plume is visible from this vantage point. The plume's source is 130 kilometers (80 miles) below the edge of Io's disk, on the far side of the moon.
Click to expand...

Here's an image of Io snapped by the Galileo spacecraft:

Great image of the sulfurous little rock. Gotta spread some rep around.
Who would Jesus torture?

No protracted war can fail to endanger the freedom of a democratic country. - Alexis De Tocqueville

"When fascism comes to America, it will be wrapped in the flag and carrying a cross" - Sinclair Lewis

"All, too, will bear in mind this sacred principle, that though the will of the majority is in all cases to prevail, that will to be rightful must be reasonable; that the minority possess their equal rights, which equal law must protect, and to violate would be oppression" - Thomas Jefferson.
W

NASA Juno Spacecraft, Nearing Jupiter, to Shed Light on Gas Giant
June 26, 2016 — After a five-year journey, the spacecraft Juno is nearing its destination, the planet Jupiter, where it will enter polar orbit and start sending back data back July 4. Scientists at Jet Propulsion Laboratory, the California mission control center for this NASA project, say Juno will pierce the dense clouds of the gas-covered giant and offer insights into its origin and nature of both the planet and our solar system.

Launched in August, 2011 from Cape Canaveral, Florida, Juno is powered by giant solar panels and will map the entire surface of Jupiter during 37 orbits over 20 months, revealing information on the planet's origin, structure, atmosphere and magnetic forces. The craft will endure a harsh environment, says project scientist Steve Levin. “Jupiter is the biggest, baddest planet in the solar system,” he said, with “a bigger magnetic field, bigger aurora, bigger radiation belts, bigger gravity. Everything about it really is bigger.” This artist's rendering made available by NASA/JPL-Caltech on July 7, 2015, shows the Juno spacecraft above Jupiter.​
Radiation from the planet is intense, requiring a 170-kilogram radiation vault, which Levin says is “a huge titanium box” to shield the sensitive instruments. The craft is like an armored tank, said principal investigator Scott Bolton, “and we're diving in from above, trying to thread the needle between the radiation belts and Jupiter's atmosphere.”

That atmosphere is made up mostly hydrogen and helium, like the sun, and scientists say that beneath the visible clouds lies an ocean of compressed liquid hydrogen. They do not know where Jupiter has a solid core, but say that learning more about the atmospheric composition, including its levels of water, will offer important insights on the planet. They say Jupiter is a kind of miniature solar system, circled by four large moons and dozens of smaller ones, and that learning more about it will help us understand planetary systems. People around the world can follow the mission online by downloading software called Eyes on the Solar System from the NASA website. 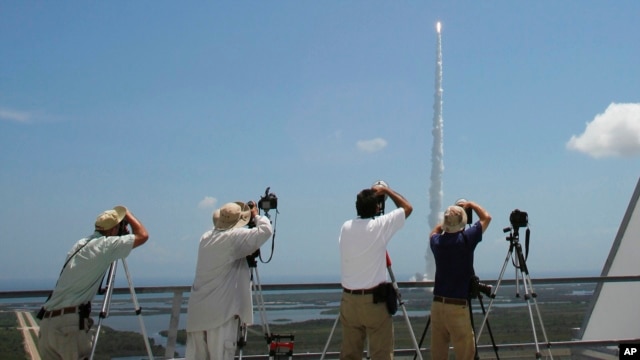 Photographers track an Atlas V rocket with the Juno spacecraft as it lifts off from Space Launch Complex-41 in Cape Canaveral, Florida, Aug. 5, 2011.​
On the night of July 4, California time, Kevin Hussey of NASA's educational outreach team says “you're going to be able to witness this historic event, the Juno spacecraft being captured by Jupiter into orbit.” In the months that follow, the public can follow the mission's progress. In February, 2018, the Juno craft will plunge into the Jovian atmosphere to burn up like a meteorite, its mission completed. The Juno mission is named for a goddess, who, in Roman mythology, could see through clouds to learn what her husband, the god Jupiter, was up to. Scientists say the spacecraft will, in a similar way, reveal the mysteries of the planet Jupiter.

The Jovian system is a very interesting place. When Voyager first sent back photos of that system we realized that the solar system was a very much more complicated place than we had ever imagined. I still think that we should explore the clouds of Jupitier as a possible place of life not as we know it.
W

Facts about the Jupiter Juno mission...

3-2-1: A look at NASA's Jupiter mission by the numbers
July 3, 2016 — Since launching in 2011, NASA's Juno spacecraft has been cruising toward the biggest planet in the solar system. On Monday, Juno is scheduled to perform a nail-biting move designed to enter orbit around Jupiter to explore its cloud-covered atmosphere and interior makeup.

Here are a few key numbers about the $1.1 billion mission:

That's the total distance traveled from launch to arrival. Juno's journey wasn't a straight shot. Because the rocket that carried Juno wasn't powerful enough to boost it directly to Jupiter, it took a longer route. It looped around the inner solar system and then swung by Earth, using our planet as a gravity slingshot to hurtle toward the outer solar system.

That's how close Juno will fly to Jupiter's cloud tops. It'll pass over the poles 37 times during the mission on a path that avoids the most intense radiation.

That's the time it takes for radio signals from Jupiter to reach Earth. During the encounter, Juno will fire its main engine for about a half hour to slow down. By the time ground controllers receive word that it started, the engine burn would have been completed, and if all goes as planned, Juno would be in orbit.

That's how long the mission will last. Because Juno is in a harsh radiation environment, its delicate electronics are housed in a special titanium vault. Eventually, Juno will succumb to the intense radiation and will be commanded to plunge into Jupiter's atmosphere to avoid any collision with the planet's moons.

Juno carries a suite of nine instruments to explore Jupiter from its interior to its atmosphere. It will map Jupiter's gravity and magnetic fields and track how much water is in the atmosphere. Its color camera dubbed JunoCam will snap close-ups of Jupiter's swirling clouds, polar regions and shimmering southern and northern lights.

Three massive solar wings extend from Juno, making it the most distant solar-powered spacecraft. The panels can generate 500 watts of electricity, enough to power the instruments.

Looks like Jupiter got its own version of Las Vegas...

Scientists reported Tuesday that the dark expanse is 15,000 miles (24,000 kilometers) across and 7,500 miles (12,000 kilometers) wide. It's in the upper atmosphere and much cooler than the hot surroundings, thus the name Great Cold Spot. And unlike the giant planet's familiar Great Red Spot, this newly discovered weather system is continually changing in shape and size. It's formed by the energy from Jupiter's polar auroras. 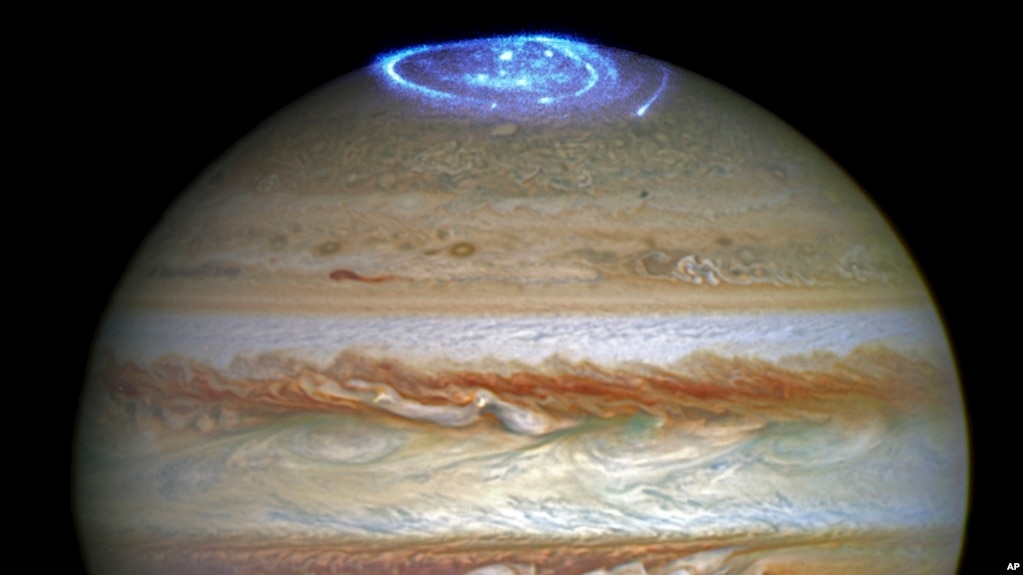 Auroras on the planet Jupiter. This image produced by NASA using a photograph captured by the Hubble Space Telescope in spring 2014, and ultraviolet observations of the auroras in 2016. On April 11, 2017, scientists reported a "Great Cold Spot" in the thermosphere of the planet. And unlike the giant planet’s familiar Great Red Spot, this newly discovered weather system is continually changing in shape and size. It's formed by the energy from Jupiter's polar auroras.​
A British-led team used a telescope in Chile to chart the temperature and density of Jupiter's atmosphere. When the researchers compared the data with thousands of images taken in years past by a telescope in Hawaii, the Great Cold Spot stood out. It could be thousands of years old. "The Great Cold Spot is much more volatile than the slowly changing Great Red Spot ... but it has reappeared for as long as we have data to search for it, for over 15 years," the University of Leicester's Tom Stallard, lead author of the study, said in a statement.

Stallard said Jupiter's upper atmosphere may hold other features. Scientists will be on the lookout for them while also studying the Great Cold Spot in greater detail, using ground telescopes as well as NASA's Juno spacecraft in orbit around Jupiter, he said. The study was published in Geophysical Research Letters, a journal of the American Geophysical Union.

Second 'Great Spot' Found at Jupiter, Cold and High Up
Click to expand...

Religions should be tax-exempt.
2 3 4

A moment ago
Pellinore

A moment ago
Curried Goats

A moment ago
jehanne1431