Together with her fellow massage students from Tel Aviv area, Michelle went up north to relieve the exhausted soldiers
Michelle Novack

When I woke up, I did my usual. I went straight away to the internet to check all the news sites to see what had happened while I had slept, to make sure everyone I know is okay. These last few days though have been different. Instead of just looking for names of my friends and family that are up in the north fighting, I now have a whole slew of new friends that I have just made. They are out there risking their lives for us while we in the Tel Aviv area seem to sometimes forget there is even a war going on. 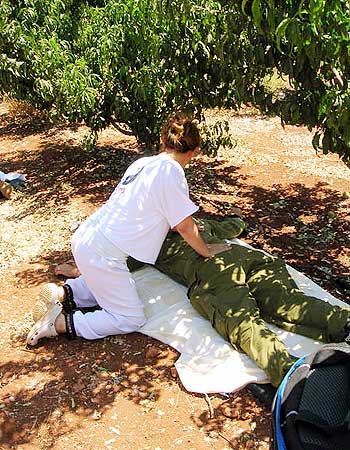 While we are still going out club hopping (like never before), guys that could have been ordering me a drink last week are now suddenly out on the frontline today. I know this first hand because a few days ago my school, Medicine in Ramat Gan, organized a trip of volunteers to go up to the camps in the north to give the soldiers massage treatments.

Ive lived in Israel for 12 years now moving here from the United States. I came from the University of Florida to the overseas program at the University of Haifa. Ive always wanted to join the army and be a part of the Zionist dream. Unfortunately, I was a bit too old at the ripe age of 19.5 and being a girl they had no use for me at the time in the IDF.

Going up north and being with these soldiers, in their time of need, made such an impression. When we first got there, we would shriek and jump at the horrible noises the cannons made. We didnt know who was firing at who. Even when we were told not to worry that it was us firing at them, it didnt do much to ease our tensions.

Amidst all the firing, we still got to work and started doing Shiatsu, Reflexology, and all kinds of Massage on the soldiers. Sometimes it was so fast and awkward, it was just done on a thin mattress we brought laid over rocks on the ground or on the cots they slept on. 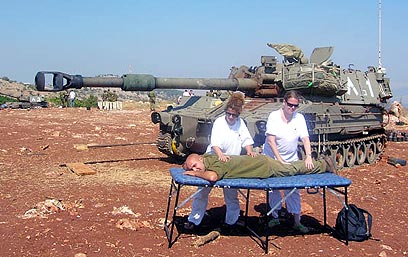 The guys were so happy to see us. We brought home baked goodies, that we had made, which they devoured in an instant. We also brought many donated items such as socks, underwear, towels, toothbrushes and paste, soap, razors, etc I felt so awful for the guys because they were so embarrassed to have us touch them because for many of them it had been days and days since they had showered. They were living in filth, covered in dirt, and didnt particularly smell too good.

It was especially hard for me as a Reflexologist to even be able to coax the guys to let me treat them because they didnt want me to see and smell their damaged feet full of fungus, even though their bodies were crying out for help. It broke my heart.

While we were at one of the camps we found out that one of the loud booms had hit one of the camps we were supposed to have gone to before this one. It was only at the last minute that we had changed plans and decided to go to the second one. The one that was hit was Kfar Giladi. The reservists were killed. Many were injured. It couldve been us lying on the ground that day.

What was one of the worst realizations was that these werent some soldiers they were regular guys. Most of them were around 25-35 just like we were. Many of them were students. A few told me how they were missing their final exams now in University. One guy told me how he had a ticket to go to Thailand in two weeks with his girlfriend, just like Im leaving for the east in two weeks.

They werent strangers anymore, but had faces and names and personalities. They werent these silent sullen jarhead army types, but were cool down to earth guys. Many even had long hair.
"Governments tend not to solve problems, only to rearrange them."
-Ronald Reagan

'At Least Our Military Was Inclusive,' Says Conquered American Working In Chinese Prison Camp In Year 2025

The DNC releases its strategy for the upcoming midterms.
2 3