Manchin lays out a Dem bill he can back: Taxes, prescription drugs, climate cash, "the social issues, we basically have to deal with those afterward"

President Joe...Manchin thinks we're not watching what he is doing because we are distracted by war in Ukraine!

He told Newsmax, "No one will notice I voted with my Republican friends." 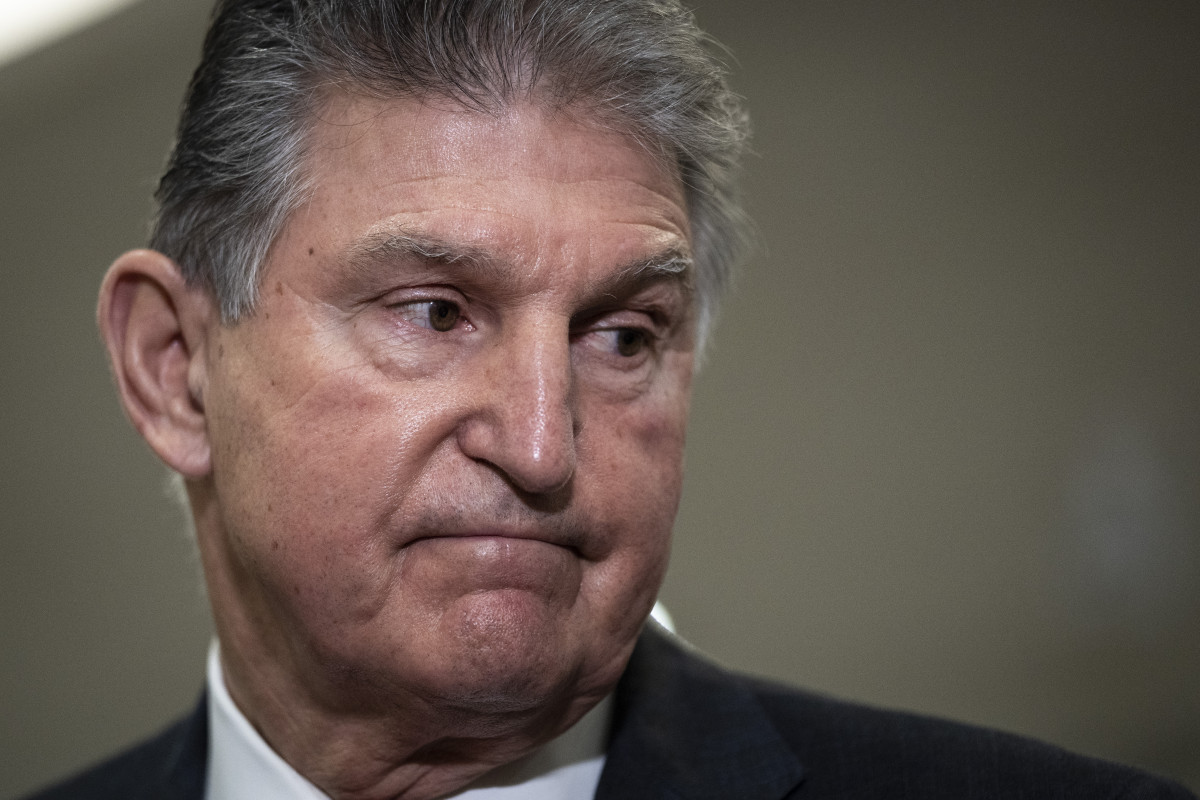 "And the social issues, we basically have to deal with those" afterward, the West Virginia centrist said in a post-State of the Union interview.

Manchin, who also chairs the Senate Energy Committee, said that the climate portion of any theoretical bill will look different now that Russia is invading Ukraine. He’s calling for the U.S. to ban oil imports from Russia and ramp up domestic energy production, including fossil fuels. He would support big clean energy investments in a potential deal, he said, but wants domestic oil, gas and coal production to still be a big part of the mix.

“You want to be able to defend your people, have reliable, dependable and affordable power? You have to use ‘all of the above,’” Manchin said, defending his support for clean energy investments. “They say ‘Manchin doesn’t care … he’s killing the environment.’ I’m not killing anything.”

Though he prefers everything in Congress to be bipartisan, Manchin said he has “come to that conclusion” that changing the tax code to make the rich and corporations pay their fair share can only be done with Democratic votes. As far as whether he thinks his party finally understands his parameters for joining the talks, he said that Democrats “know where I am. They just basically think that I’m going to change.”

Asked about Manchin’s far narrower proposal, Rep. Barbara Lee (D-Calif.) scoffed, saying it would not satisfy many of the House’s frustrated liberals. She seemed more interested in still trying to change Manchin’s mind on the expanded child tax credit and other domestic programs than in accepting his blueprint.

“I would hope he would reconsider, and realize how many people are being left behind,” Lee said. “We’ve got to keep going and try to get everything that we can get.”

“We just have to fish or cut bait on reconciliation. Enough of this,” countered Sen. Elizabeth Warren (D-Mass.). there’s so much that we all agree on, that we ought to be able to get a deal, get it together and get it done”

Meanwhile, aggravation with the West Virginia senator remains high in the House, where members have seen zero action on the multi-trillion-dollar social spending plan that required them to burn huge amounts of political capital to get passed.

“I think Mr. Manchin is a good and decent man who is out of sync right now with the goals of the American public,” Rep. Emanuel Cleaver (D-Mo.) said, adding that he was unaware of any of Manchin’s recent pivots toward energy or deficit reduction.
P

Sen. Manchin isn't a dumb ass. He is a liberal senator in a state that is solidly Pro-Trump.

He doesn't want to alienate his own electorate, and realizes that the Republicans will certainly schlong him in 2024 if he votes for Biden's Marxist agenda.

Polishprince said:
Sen. Manchin isn't a dumb ass. He is a liberal senator in a state that is solidly Pro-Trump.
He doesn't want to alienate his own electorate, and realizes that the Republicans will certainly schlong him in 2024 if he votes for Biden's Marxist agenda.
Click to expand...

Manchin isn't a liberal. At least by today's definition i.e. progressive".
True Xiden did not win even one county in WV, so Manchin needs to represent his state.
Also true that if Manchin votes for the progressive agenda he's out.
Then again, he may prefer to be the WV governor than a senator.

Will the democrats be content with passing Manchin's "what I can support" or will they get nothing passed?

Aint it funny how the same people here who rail against the 2nd amendmen?

B
What Kind of Scam is Joe Manchin Cooking Up?
2 3

Manchin joins West Virginia AARP, says lowering prescription drug prices is the "highest thing on the order" for Congress to get done

J
Senator Manchin Is Right On Biden's BBB bill It's An Inflation Cancer!

The Single Most Important Determiner
2

Whose side was the Continental Army on?
2 3 4

What are the prospects for Ukrainian black soil under Zelensky