I present the mayor of Oakland 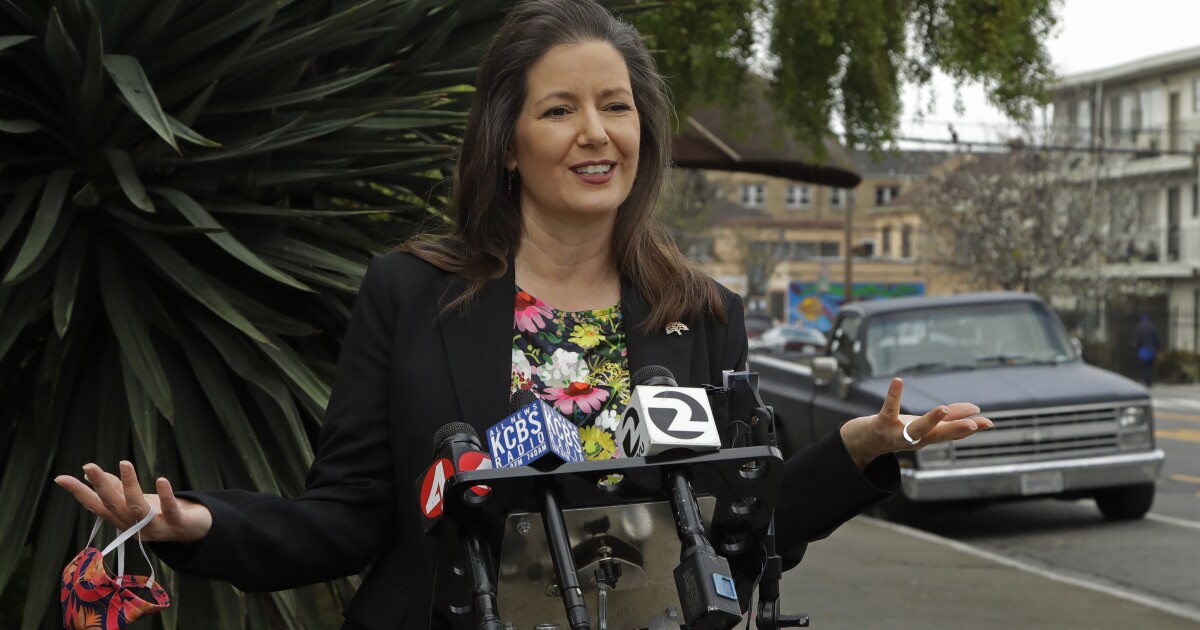 Oakland mayor insists on investigating rope swing as a hate crime, says 'intent does not matter'

The people of Oakland, California, deserve better than this.

Mayor Libby Schaaf plunged her city into a panic this week when she announced that a series of supposed nooses found hanging from trees in a city park would be investigated as a hate crime. The FBI is investigating the matter now, she told reporters at a somber, deadly serious press conference.

Schaaf’s announced investigation has almost certainly served as confirmation for some that something nefarious indeed happened at that park. After all, they would not go through the trouble of bringing in the FBI unless something serious had happened, right?


As it turns out, nobody had hung nooses. The ropes, which have been removed by city officials, were put up by a black resident, Victor Sengbe, who said they were part of an exercise swing system that he and his friends assembled for the benefit and enjoyment of parkgoers.

Amazingly, despite Sengbe’s explanation and video proof and despite how several members of the community who came forward immediately told law enforcement officials that the ropes were just part of a swing system erected months ago, Schaaf maintains the ropes are a hate crime until proven otherwise.

She added, "We have to stop terrorizing our black and brown citizens. As white people, we have to become knowledgeable and educated about the impacts of our actions."

Deplorable Yankee said:
I present the mayor of Oakland
Click to expand...

This freaking twit needs removed from office immediately. Of course, the idiot progressives who elected her have no common sense to do so.

So some swings hung from a tree by a BLACK man are a racial hate crime against Blacks? And despite the fact that there was no hate nor intention of hate, it remains a hate crime nevertheless so long as the possibly remains of ONE PERSON taking it that wrong way?

Wow. This idiot in one fell swoop has just made anything we do from here on out a potential risk and I now face potential criminal charges and federal investigation if I simply ask a neighbor for directions, comment on the weather or tell them to have a nice day. Welcome to the Age of Fear.

For now on in, we are going to assume everything anyone says or does anywhere anytime to anything to be a hate crime until proven otherwise.

We have just kissed jurisprudence goodbye.

I guess it would be useless to point out that the "racial symbolism" of a hangman's noose is just another manufactured delusion by progressives! For many years, the gallows was the standard for executions and far more white people were hung dead by a noose than blacks ever were! 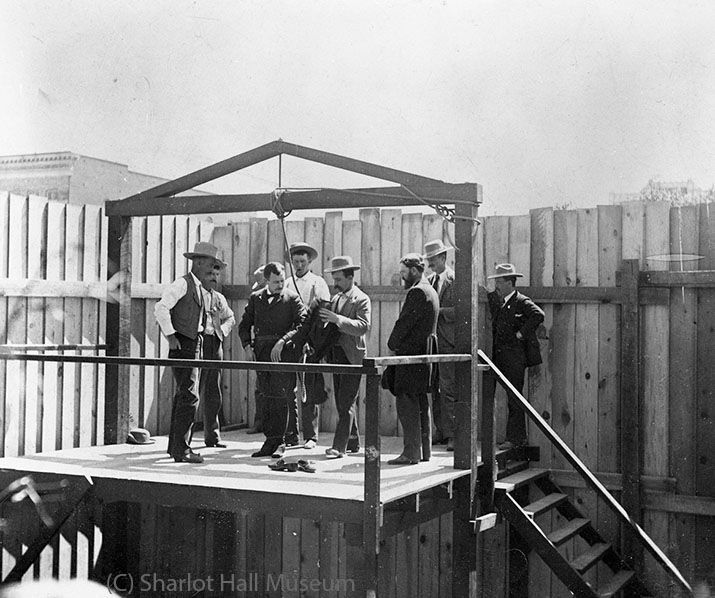 toobfreak said:
I guess it would be useless to point out that the "racial symbolism" of a hangman's noose is just another manufactured delusion by progressives! For many years, the gallows was the standard for executions and far more white people were hung dead by a noose than blacks ever were!

Its part of our illustrious past

toobfreak said:
So some swings hung from a tree by a BLACK man are a racial hate crime against Blacks? And despite the fact that there was no hate nor intention of hate, it remains a hate crime nevertheless so long as the possibly remains of ONE PERSON taking it that wrong way?

Seriously, everyone that has a relationship with the one, true, living God and Father of Christ
must surely recognize God is setting and resetting the stage for Christ's return...
we are witnessing the signs as they manifest and come to pass
and watching every Act unfold and play out right before our very eyes

For it is written,
“I will destroy the wisdom of the wise,
And the cleverness of the clever I will set aside.”


Do not say,
‘We have found wisdom;
God will rout him, not man.’


Do not be excessively righteous and do not be overly wise. Why should you ruin yourself?


Therefore behold, I will once again deal marvelously with this people, wondrously marvelous;
And the wisdom of their wise men will perish,
And the discernment of their discerning men will be concealed.”


The wise men are put to shame,
They are dismayed and caught;
Behold, they have rejected the word of the Lord,
And what kind of wisdom do they have?


He captures the wise by their own shrewdness,
And the advice of the cunning is quickly thwarted.


Let no man deceive himself. If any man among you thinks that he is wise in this age,
he must become foolish, so that he may become wise.


This wisdom is not that which comes down from above, but is earthly, natural, demonic.


Do not be wise in your own eyes;
Fear the Lord and turn away from evil.


Answer a fool as his folly deserves,
That he not be wise in his own eyes.


Do you see a man wise in his own eyes?
There is more hope for a fool than for him.


For he has said,
“By the power of my hand and by my wisdom I did this,
For I have understanding;
And I removed the boundaries of the peoples
And plundered their treasures,
And like a mighty man I brought down their inhabitants,


The words of his mouth are wickedness and deceit;
He has ceased to be wise and to do good.


For I am not ashamed of the gospel of Christ:
for it is the power of God unto salvation to every one that believeth;
to the Jew first, and also to the Greek.

17 For therein is the righteousness of God revealed from faith to faith:
as it is written, The just shall live by faith.

19 Because that which may be known of God is manifest in them; for God hath shewed it unto them.

20 For the invisible things of him from the creation of the world are clearly seen,
being understood by the things that are made, even his eternal power and Godhead;
so that they are without excuse:

21 Because that, when they knew God, they glorified him not as God, neither were thankful;
but became vain in their imaginations, and their foolish heart was darkened.

22 Professing themselves to be wise, they became fools,

23 And changed the glory of the uncorruptible God into an image made like to corruptible man,
and to birds, and fourfooted beasts, and creeping things.

24 Wherefore God also gave them up to uncleanness through the lusts of their own hearts,
to dishonour their own bodies between themselves:

25 Who changed the truth of God into a lie,
and worshipped and served the creature more than the Creator, who is blessed for ever. Amen.

26 For this cause God gave them up unto vile affections:
for even their women did change the natural use into that which is against nature:

27 And likewise also the men, leaving the natural use of the woman,
burned in their lust one toward another; men with men working that which is unseemly,
and receiving in themselves that recompence of their error which was meet.

28 And even as they did not like to retain God in their knowledge,
God gave them over to a reprobate mind, to do those things which are not convenient;

32 Who knowing the judgment of God, that they which commit such things are worthy of death,
not only do the same, but have pleasure in them that do them.

And you will hear of wars and rumors of wars. See that you are not troubled;
for all these things must come to pass, but the end is not yet.

7 For nation will rise against nation, and kingdom against kingdom.
And there will be famines, pestilences, and earthquakes in various places.

8 All these are the beginning of sorrows.

9 “Then they will deliver you up to tribulation and kill you,
and you will be hated by all nations for My name’s sake.

10 And then many will be offended, will betray one another, and will hate one another.

11 Then many false prophets will rise up and deceive many.

12 And because lawlessness will abound, the love of many will grow cold.

13 But he who endures to the end shall be saved.

This is how-to instructional video on how to make a noose.


Encourage everyone to take any random piece of leftover string or rope, make a noose out of it and leave it at random locations where it may trigger moonbats.

Wrapping a birthday gift and have some leftover ribbon? Don't let it go to waste. You could potentially trigger a moonbat, or several moonbats, just it by fashioning it into a noose and leaving it on the sidewalk, in a grocery store aisle, or wherever. Be creative.
Last edited: Jun 25, 2020
You must log in or register to reply here.

White supremacists and other extremist groups are using protests and a pandemic to amplify their...

More "peaceful" protests over the weekend.
5 6 7

J
wow ... gun sales are skyrocketing and the 2nd amendment is gaining strength.
2

And, the Totalitarian Mask Police Round Up Non-Compliers
5 6 7