If ISIS does invade Italy, will NATO step up to the plate?
An attack on Italy by ISIS should be viewed as an attack on all 28 member countries, but will it?

I'm sure all countries except the USA would respond.

Once Obama is gone, the USA too should respond.

It's funny, the stupid stories that the ODS crowd choose to get themselves worked up over.

That's right kooks, Saracen raiders are coming to Italy, and nobody in Italy has any weapons. They're helpless, unless you go save them. So get going.
K

I do not think NATO will step in. obumble will make the argument and NATO will take it.

The NATO alliance will protect a NATO country when it is attacked by another country. Isis is not a country.

You forgot to post the link where an official of the Italian government expressed this 'fear.'
W

Another one bites the dust...

Head of Islamic State in Libya, senior terror leader killed by U.S. airstrikes, Pentagon says
Dec. 7, 2015 | WASHINGTON, Dec. 7 (UPI) -- U.S. military airstrikes last month killed the leader of the Islamic State in Libya, the Pentagon said Monday, on the same day as the terror attacks in Paris. Defense officials confirmed the death of Abu Nabil, the militant who led the operations of the IS in Libya.

Nabil was specifically targeted in the strikes, the Pentagon said a day after the operation. However, his death wasn't officially confirmed until Monday. "Nabil's death will degrade ISIL's ability to meet the group's objectives in Libya, including recruiting new ISIL members, establishing bases in Libya, and planning external attacks on the United States," Pentagon spokesman Peter Cook said at the time, using an alternate acronym for IS, which is also known as Daesh. Nabil, who also went by the name Wissam Najm Abd Zayd al Zubaydi, was a longtime al-Qaida operative and the senior IS leader in Libya. "While not the first U.S. strike against terrorists in Libya, this was the first U.S. strike against an ISIL leader in Libya, and it demonstrates we will go after ISIL leaders wherever they operate," Cook said Monday.

The Pentagon also confirmed the death of a senior terror leader in Somalia -- Abdirahman Sandhere, a member of an al-Qaida affiliate -- on Dec. 2. Sandhere was also known as "Ukash." "Ukash's removal from the battlefield is a significant blow to al-Shabab," Cook said, "And [it] reflects the painstaking work by our intelligence, military and law enforcement professionals." 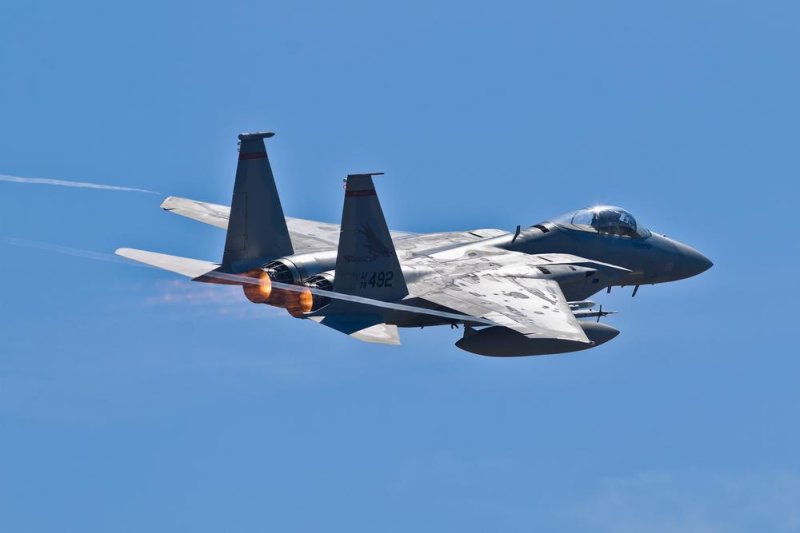 An airstrike carried out by a U.S. military McDonnell Douglas F-15 Eagle (pictured) killed the leader of the Islamic State in Libya, Abu Nabil, on Nov. 13, the Pentagon confirmed Monday. The military also confirmed the death of another senior terrorist leader on Dec. 2.​
The Department of Defense's confirmations Monday fall in line with a nationally televised address Sunday night from President Barack Obama, during which he re-emphasized the United States' commitment to destroying the Islamic State and other militants aligned in their jihad against the West. "Our success won't depend on tough talk, or abandoning our values, or giving in to fear. That's what groups like [the IS] are hoping for," Obama said. "Instead, we will prevail by being strong and smart. Resilient and relentless. And by drawing upon every aspect of American power. " "The United States will continue to use the tools at [its] disposal -- financial, diplomatic, intelligence and military -- to dismantle al-Shabab and other terrorist groups who threaten the United States, [its] interests and persons," Cook said.

The airstrike that killed Nabil occurred on the same day as the Paris terror attacks, which left 130 dead and nearly 370 wounded. Also Monday, the U.S. Department of Homeland Security announced a change to the National Threat Advisory System that will add an "intermediate level," intended to keep the American public better informed of terror threats.

mamooth said:
It's funny, the stupid stories that the ODS crowd choose to get themselves worked up over.

That's right kooks, Saracen raiders are coming to Italy, and nobody in Italy has any weapons. They're helpless, unless you go save them. So get going.
Click to expand...

Italians are not warriors,they are lovers....
You must log in or register to reply here.

When Is An Evolution Scientist Ever Going To Admit The Other Side May Be Right?
13 14 15