How The UN With Regime Edited The Truth in Syria

New report by Foreign Policy explain the complicity of UN with the criminal regime in Syria.

How the U.N. Let Assad Edit the Truth of Syria’s War
As Syrian civilians starved to death, U.N. officials let the government in Damascus alter its master plan for saving lives.

Its title is prosaic and its content dry, but the stark statistics in the U.N.’s annual summary of relief programs tell the story of Syria’s humanitarian nightmare. This is a country on life support: 13.6 million people are in need of humanitarian assistance, Syrians are being displaced at a rate of 50 families per hour every day, and at least 1 million people in displaced persons camps receive no international aid.

But to close readers of the U.N. Humanitarian Response Plan, which was published on Dec. 29, the big surprise was what the 64-page document failed to mention. The United Nations, after consulting the Syrian government, altered dozens of passages and omitted pertinent information to paint the government of Bashar al-Assad in a more favorable light.

By comparing the final document to an earlier draft that was obtained by Foreign Policy, it is evident that 10 references to “sieged” or “besieged” areas, such as that in Madaya — the town in southwestern Syria that saw 23 people die of starvation over several months before the arrival of a U.N. aid convoy in mid-January — were removed. Gone was any mention of the program to clear mines and unexploded ordnance, such as the “barrel bombs” the regime drops indiscriminately on populated areas. Gone were all mentions of Syrian relief groups that shepherd the aid to civilians in rebel-held areas.
How the U.N. Let Assad Edit the Truth of Syria’s War
Click to expand... 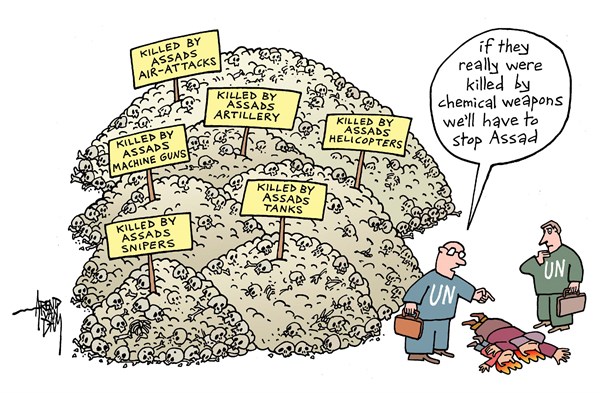 All that is happening in Syria is Assad's fault? Because that is just not true. It's a blatant lie as a matter of fact. You can blame the Sunni states of Saudi Arabia, Qatar and Turkey for wanting to overthrow Assad and turn Syria over to the Muslim Brotherhood.

With our help.
You must log in or register to reply here.

Vulture accused of SPYING for Israel is freed after UN

Starving them out, few choices for these interned civil war victims

J
Unfolding Syrian Developments Will Seriously Stain The Conscience of The West!

How Do I Get COVID-19 Medications?