'What a year, what a year, conservatives now control our house and senate, ain't it great. Be assured dedicated republican voters, we will once again block any and all progressive ideas while supporting our corporate sponsors. And this year's CPAC will be filled with the usual barnstormers and entertainers of the past, with new faces too. So just to give you an idea of what's in store, check out the speakers and a brief comment on their talks this year.'

Jeb Bush will provide Spanish language lessons so immigration officials can use proper Spanish vulgarity when kicking out immigrants.

Scott Walker will outline how to handle calls from the Koch brothers, calls especially from fake Koch brothers. No more submissive groveling for Scott. This time he'll ask questions.

Rick Perry will outline all the government agencies he wants to abolish, two, four, eight, maybe thirty, he's not sure yet, but he'll know by speech time.

Marco Rubio said he was thirsty and needed a glass of water. His earth shattering ideas will be posted when he gets one.

Ted Cruz, a Canadian by birth will explain why a seat in the US Senate is better than working in the Tar Sands of Canada even though he never had a real working class job in his life. Ted just loves those American government job perks.

Ben Carson will give a lesson on why healthcare is tantamount to slavery. This should be a doozy; Ben has a way with historical comparisons.

Joni Ernst was discussing animal castration but thought doing the same to humans conflicted with her religious beliefs that all life is sacred, unless of course you're an animal.

Rand Paul demonstrated his love of freedom by showing up early then leaving the stage returning the next day with plagiarized notes from another speaker. Talk about freedom.

Bobby Jindal put everyone to sleep going on and on about light skin and dark skin, no one could figure it out, but the nap was nice.

Rick Santorum talked about homeschooling and slippery slopes. Seems we are headed down one now and Rick thinks any day now blacks and whites will be allowed to marry. No one had the nerve to tell him it already happened.

Carly Fiorina thinks her failure at HP qualifies her for president, she may have something there as her recent talk with Bush 43 on tactics was all about wearing jeans and drinking beer with friends, eating pretzels too.

Sean Hannity had hoped to bring back the anti-law, anti government hero Cliven Bundy, but Cliven wouldn't promise not to use the N word. So Sean will cover his good friend Jon Stewart instead.

“Duck Dynasty” star Phil Robertson, talked about duck calls and claimed all the ******* he knew were happy *******. The crowd cheered his first amendment right. Oddly someone let a duck loose in the auditorium and didn't that duck land one on Phil's head. Thankfully Phil and Wayne weren't armed today. While unbelievable, the duck had a human caller which imitated Phil's cranky sounding voice. The duck was unarmed.

Bill Flores will be all covered in oil, actually it's pancake syrup, proving oil does not cause human warming. Editors are unsure here if he on the right track or even planet, but at CPAC money talks.

Donald Trump talked marriage fidelity, nah that can't be right, think that was Neut Gingrich. Anyway Donald is still looking for marriage certificates, no hold it again, birth certificates of all democrats running for president. We hope this great and important work keeps him busy for a long time.

NRA president Wayne LaPierre will give a live demonstration on how not to shoot yourself with a bra holster. Wayne's boobs are kinda small but you'll get the idea. Oh and the gun will be unloaded, republican hero George Zimmerman will be on hand to check.


Fox and Washington Times readers and audiences will be treated to a special pep session in which they scream 'No No No No' to an Obama effigy. Other cheers will include, 'you don't love America' and 'go back to Kenya, Marxist.' This session is currently overbooked.

We missed Chris Christy, Rush Limbaugh, and Ann Coulter. Chris is dieting in Iowa, says the climate fits him, Rush Limbaugh is in Germany showing his support of America by buying a Maybach car. Rush feels supporting Germany is the American thing to do. And Ann can't figure out if she's gay or straight or even a women. Mitt Romney was missing too, rumor has it he is in the Cayman's counting his American money hidden there. If anyone has more detail let us know. And so it goes....


Stay tuned we hope to bring more information about this momentous event. 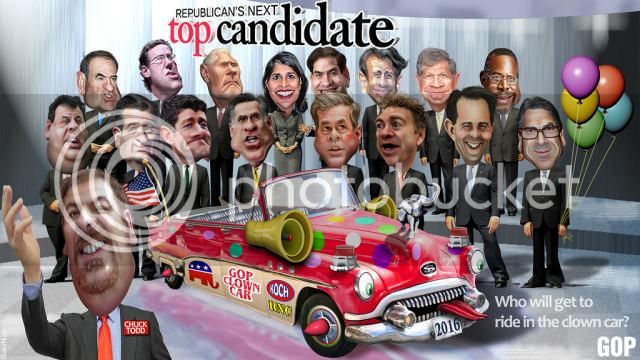 Welcome to the republican party today. You gotta give Phil credit, conversations about STDs is a bit new for a party that repeats the same BS. lol

"Among all the speakers who’ve come and gone on day two of the Conservative Political Action Conference, my favorite thus far has been former Texas governor and affable dunce Rick Perry. He came roaring out onto the stage to the accompaniment of AC/DC’s “Back in Black,” and then twirled off a loud and mostly articulate rendition of what will become his 2016 stump speech. It had all the hallmarks of your standard CPAC address: the world’s falling to pieces and it’s Obama’s fault; the economy sucks and it’s Obama’s fault; the unemployment rate is a “sham” (probably perpetrated by Obama); and even though everything is terrible there’s hope for the future because of freedom, America, freedom, liberty, America, etc."
Rick Perry s border swindle Posing as a border security tough guy at CPAC - Salon.com

"Robertson, one of the stars of A&E's "Duck Dynasty" who was suspended from the show in 2013 after making anti-gay remarks, appeared Friday at the 2015 Conservative Political Action Conference to accept the Andrew Breitbart Defender of the First Amendment Award from Citizens United.

Addressing the annual gathering of conservatives, Robertson hit on a number of popular right-wing talking points, including his allegiance to the Bible and his disdain for House Speaker John Boehner (R-Ohio). The speech took a turn, however, when the "Duck Dynasty" patriarch began lamenting the United States' high incidence of STIs." CPAC Officially Goes Off The Rails With Phil Robertson s Rant On STDs The Revenge Of The Hippies

Why didnt Kamala Harris recuse herself from the vote on Barrett?
2

Sen. Blumenthal makes threats on Senate floor if ACB is confirmed to SC.
6 7 8

I am Seriously Puzzled about This...

The vote is hapenning now. Welcome to SCOTUS JUDGE BARRETT!
2

CBS' Norah O'Donnell reminds Kamala Harris she has the most left-wing voting record in the Senate (EVEN MORE THAN BERNIE!) after she tries to deny it
2