Gubernatorial Decrees and the Fifth Amendment

And why are the bets off ?

All a president has to do is declare national emergency and our whole system of government is set aside ?

Does not seem correct to me.
M

Can we count on government employees to not get paid while the private sector is closed?
Click to expand...

Who do you think is leading the charge against Coronavirus?

Only a few government workers are fighting the commie virus

but if government is going to deny private citizens the right to work it should share the pain by denying itself also
Click to expand...

Show a public health threat and I am sure they will shut it down
Click to expand...

Who decides when it is a threat.

What is the standard ?
M

Can you point to that power in the constitution?
Click to expand...

At the State level?
That is where they are being closed
Click to expand...

Helping in an emergency is for the General Welfare of We the People.
Well within the broad powers of Congress
Click to expand...

That is not what General Welfare means.

Madison was quite clear on the subject. 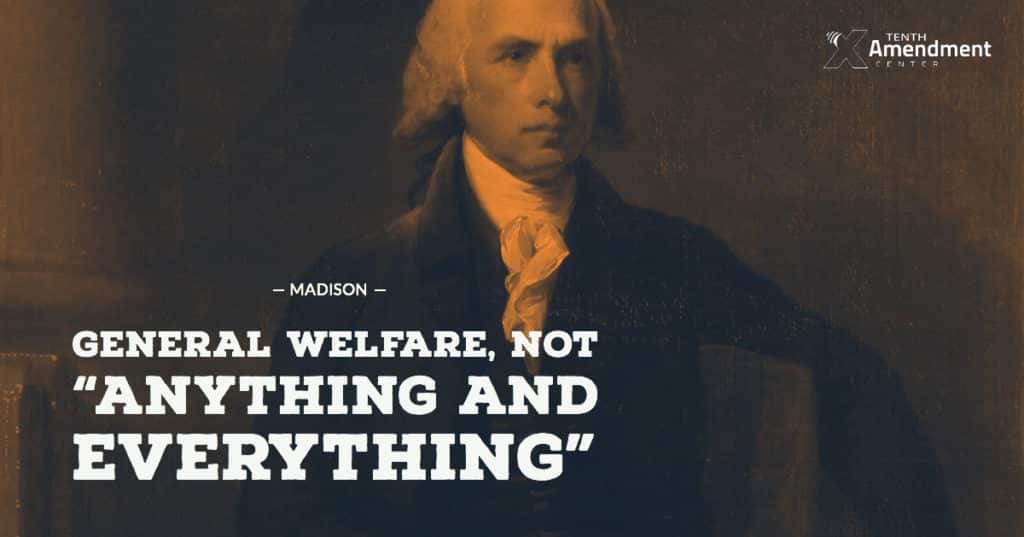 The "general welfare" clause serves as a go-to for people who want the federal government to come in and solve various societal problems. The clause has served as the justification for feder

It is supposed by some gentlemen, that Congress have authority not only to grant bounties in the sense here used, merely as a commutation for drawbacks, but even to grant them under a power by virtue of which they may do anything which they may think conducive to the “general welfare.” This, sir, in my mind, raises the important and fundamental question, whether the general terms which had been cited, are to be considered as a sort of caption or general description of the specified powers, and as having no further meaning, and giving no further power, than what is found in that specification, or as an abstract and indefinite delegation of power extending to all cases whatever; to all such at least, as will admit the application of money, which is giving as much latitude as any government could well desire.

I, sir, have always conceived—I believe those who proposed the constitution conceived; it is still more fully known, and more material to observe, those who ratified the constitution conceived, that this is not an indefinite government deriving its powers from the general terms prefixed to the specified powers—but, a limited government tied down to the specified powers, which explain and define the general terms.

The General Welfare Clause Is Not a Blank Check

“The Congress shall have Power To lay and collect Taxes, Duties, Imposts and Excises, to pay the Debts and provide for the common Defence and general Welfare of the United States.”
Click to expand...

Here the phrase actually carries legal weight. As a result, these words create something of a dilemma. Either the founders didn’t really intend to create a general government with limited powers, or the general welfare clause doesn’t really mean Congress has the authority to fund anything and everything it deems beneficial to the nation as a whole.


In fact, legal rules of construction dictate that when reading a legal document, the enumeration of certain powers logically excludes all other powers not listed. This is actually a legal maxim – Designato unius est exclusio alterius – meaning, “the designation of one is the exclusion of the other.”

James Madison made this very point in a letter to James Robertson dated April 20, 1831.


Notice too, if you will, the word welfare is capitalized making it a noun, which is a person, place or thing, not an action. general Welfare- to promote the, is what the preamble says- not provide welfare in general. Provide and promote are not the same thing. It's a word castigation lawyers like to use along with empty suits in the District of Criminals can play with- kinda like "authorizing military force" vs Declaring War (as they know wars of aggression are not constitutional) to abdicate their congressional authority elsewhere and allow the press to use the words "war on" the cause de jour to placate and appease idiots that either can't or refuse to read and acknowledge *words mean things* as does the use of capitals and commas.
You must log in or register to reply here.

Tennessee is getting close to constitutional carry! Should your state?

The NEWER Official Discussion Thread for the creation of Israel, the UN and the British Mandate
27 28 29

Ever Wonder Why the Plight of Blacks and Homeless in Dem Cities Never Improves?
2