Greece doesn't have enough financial problems, and now this!!!

By Odile Duperry (AFP) 15 hours ago in World

[TBODY][TR][TD] [/TD]​
[/TBODY]​
[/TD] [/TR][/TBODY]
Under fire over its handling of the EU's migration surge, Greece cannot hope to manage the influx unless Brussels and neighbouring Turkey keep their side of the bargain, experts say.
The European Commission on Wednesday blasted Greece for "seriously" neglecting its border obligations and gave Athens three months to remedy the problem.
A damning EU report researched in November found insufficient registering and fingerprinting of migrants entering Greece from Turkey, the main gateway for refugees fleeing war in Syria, Iraq and Afghanistan.
This came after a succession of eastern EU states this week said Greece was failing to protect the exterior borders of Europe's passport-free Schengen zone, with some threatening to make Bulgaria and Macedonia the cutoff point if Athens is unable to staunch the inflow.

Migrant crisis: Thousands stranded in Greece as borders tighten
Fri, 26 Feb 2016 - Large numbers of migrants and refugees are stuck in Greece as Balkan countries announce further restrictions on the number crossing their borders.

Greece is trying to slow the flow to its northern border, to prevent a build-up of people there. Slovenia, Croatia, Serbia and Macedonia have each announced that just 580 a day will be allowed through their borders. So far this year, 100,000 migrants have entered the EU illegally - nearly all of them arriving in Greece. 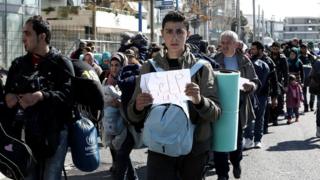 More than 400 have died on the sea crossing from Turkey. The restrictions in the Balkans follow Austria's decision last week to introduce a daily cap. Macedonia's Interior Minister, Oliver Spasovski, on a visit to the migrant camp in Gevgelija on the border with Greece, said his country could only accept as many refugees as the other countries on the Western Balkan route - Serbia and Croatia - would take.

Migrants held peaceful protests in Athens and at Piraeus port on Friday, angry that they are unable to leave Greece. Hundreds have set off on foot from a transit camp near the capital, hoping to make their own way to the border. Some carried signs reading "help us" and "we are human".

Thousands stranded as Greece becomes a migrant 'warehouse'
Feb 27,`16 -- Greece is fast becoming the "warehouse of human beings" that its government has vowed not to allow.

Hastily setup camps for refugees and other migrants are full. Thousands of people wait through the night, shivering in the cold at the Greek-Macedonian border, in the country's main port of Piraeus, in squares dotted around Athens, or on dozens of buses parked up and down Greece's main north-south highway. On Thursday, hundreds of frustrated men, women and children abandoned their stranded buses or left refugee camps, setting off on a desperate trek dozens of kilometers (miles) long to reach a border they know is quickly shutting down to them. About 20,000 migrants were in Greece on Thursday, Defense Minister Panos Kammenos said. Of those, Macedonia allowed just 100 people to cross over from Greece's Idomeni border area. By late Friday, not a single migrant had crossed into Macedonia that day, while 4,900 people waited nearby in heavy rain, according to Greek police.

Thousands more were heading north - about 40 busloads of people were waiting along Greece's main highway, while refugee camps in northern Greece and near Athens were full. Greece is mired in a full-blown diplomatic dispute with some EU countries over their border slowdowns and closures. Those border moves have left Greece and the migrants caught between an increasingly fractious Europe, where several countries are reluctant to accept more asylum-seekers, and Turkey, which has appeared unwilling or unable to staunch the torrent of people leaving in barely seaworthy smuggling boats for Greek islands. Adding to the pressure is Greece's financial predicament. The country has been wracked by a financial crisis since 2010 and still depends on an international bailout for which it must pass yet more painful reforms.

Stranded refugees and migrants protest in front of the wire fence that separates the Greek side from the Macedonian one at the northern Greek border station of Idomeni, Saturday, Feb. 27, 2016. Greek officials said not a single migrant has been allowed into northern neighbor Macedonia, with more than 5,000 people waiting at or near a border crossing to be admitted. More than 20,000 migrants are stuck in Greece​
Those have led to widespread protests, including blockades on the country's highways by farmers who are furious at pension changes. The vast majority of those reaching Greece, Europe's main gateway for migrants, have been Syrians, Afghans and Iraqis fleeing war at home "My only hope is to live in a safe place. That's enough for me actually," said 17-year-old Minhaj Ud Din Wahaj from Afghanistan's Wardak province. "We have been in war since 40 years, so I have been raised in war." In Athens, hundreds of migrants mill around central Victoria Square, uncertain of where to go next. On Thursday, two men hanged themselves from a tree in the square but were rescued by bystanders. Police said the men were trying to draw attention to their predicament.

In the north, nearly 400 people scrambled out of a former military base set up as a refugee camp in Diavata, near the city of Thessaloniki, and began walking the 70 kilometers (43 miles) to Idomeni on the Macedonian border. Dozens more set off on foot from buses stuck on the highway, where farmers' blockades were hindering traffic. Still more people flowed into the country, with dinghies full of migrants arriving on Greece's islands and hundreds more people piling on ferries heading to the main port of Piraeus. "We are escaping from war," said Rana, an English teacher from Syria arriving in Piraeus. She would not give her last name to protect those she left behind. "Our house is destroyed, and salaries in some places stopped. ... I think all the people ... seek the shelter and education for their kids." But Europe appears increasingly unwilling to provide those basics.

The only solution for Greece, to please the Eastern Europeans, is to blow the refugee boats out of the water before they enter Schengen territory.
B

Greeks still searching for answers.........color me shocked.
You must log in or register to reply here.

In Europe, the Defeat of Angela Merkel...

Does Anybody Believe the Universities' Line About So-Called "American Imperialism' ?