Hollie said:
As you have decided that you are the spokes-religioner for atheist scientists, I was hoping you could identify those scientists who are actively performing research to disprove your gods or anyone else’s gods.

I'm not the spokes-religioner, but going by what I read.

We had Stephen Hawking, but he's dead now and suffering in Hades. His belief in the big bang singularity would not allow for God. Before that it was Victor Stenger. He states he's examined all of the science and history and came to the conclusion that there is no evidence of God. I think it's his atheist faith that led him to the wrong conclusion. We see the same type of denial from the atheists here all the time.

From another thread we have Alexander Vilenkin, but he claims he's an agnostic. However, his logic falls apart when trying to defeat Kalam's Cosmological Argument. I'm not sure if he's the one who brought up infinite sets in mathematics, but that made me agree of infinite temperature and density singularity. However, that doesn't explain the cosmic inflation nor where the energy came from? Now, it's called dark energy.

I’ve noticed an anger and vindictiveness associated with the hyper-religious.

You don’t know if Hawking or anyone else is in some ‘Hades” that is a part of the fear and superstition that terrifies you. It seems your revulsion for those who don’t share your fears, superstitions and prejudices is quite apart from any benefit that hyper-religious views might benefit you.

Kalam's Cosmological Argument is a failed appeal to fear and superstition. It’s long ago been debunked as a desperate attempt for the hyper-religious to shoe horn their gods into a rational discussion.

I have to note that as usual, you use slogans such as, “the gravity of the black hole came from but that's suppose to become a singularity of infinite density”. I would suggest you first avoid getting such slang and from charlatans at creation ministries. Doing so makes you an accomplice to fundie creation ministry sloganeering.
H

james bond said:
He shows up on ordinary objects, but most of them I don't believe except for the last one.
Click to expand... 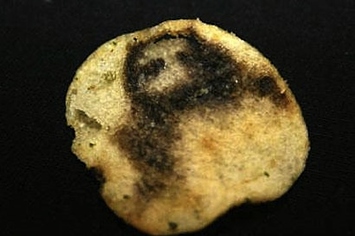 22 People Who Found Jesus In Their Food

Good one. Those are more believable than mine

Today, the Resurrection and gravity is probably the best evidence for Jesus.
Click to expand...

Nothing says evidence of resurrection and gravity better than the jeebus appearing on you toast and jelly in the morning.

Hollie said:
How do you know the gods don't play dice?

I'm naturally suspicious of people who presume to speak with authority about their gods.
Click to expand...

God doesn't play dice with the universe because we discovered quantum mechanics. Yet, the atheist scientists think that is the way to disprove God. Notice how they get things wrong because of their faith?


Hollie said:
The big Caucasian looking jeebus is something of a contradiction to a Middle Eastern jeebus.
Click to expand...

He looks more Jewish or Aramean in that statue. Compare it to the Christ of the Ozarks.

.
physics is not physiology - of which everything is chance that exists and as a formula between both physical and metaphysical properties presently combined together as an inseparable single being neither atheist nor fundy science has the least bit of clue for its existence. and certainly not the desert religions.
Click to expand...

You're coming apart at the seams over this.

That's what Stephen Hawking believed. Einstein also alluded to it. In that case, both he and Einstein were right.
Click to expand...

james bond said:
You're coming apart at the seams over this.

That's what Stephen Hawking believed. Einstein also alluded to it. In that case, both he and Einstein were right.
Click to expand...

BreezeWood said:
physics is not physiology ...
Click to expand...

.
how's that bond, coming apart at the seams - what is your formula for physiology and its spiritual content together as an inseparable being that is ever changing - - and your comparison to physics and the universe.

- unhinged by you is more like it. lacking in proof for your fundy worldview ... and mental state of scientific denial.
You must log in or register to reply here.

Is it God or Nature?

trump does not want comparisons to Nixon

As Trumps term comes to a close can Democrats finally tell us which of his policies had a negative impact on their life / quality of life?