This is the sort of thing that sounds better in your head.

"If Donald Trump has suddenly jumped on Marine One … down to Charlottesville, walked into the jail where the young man was being held, shot him between the eyes, I guarantee you people said he didn't use the right caliber bullet," Huckabee said.

They'd be calling for more gun control.
"That is a totally fake list. A hoax....Variations of it have been circulating for decades. But it is totally fake." - g5000

Granny says dey oughta hang him from a yardarm...

James Alex Fields Jnr, who is 20 years old and originally from Kentucky, was arrested and charged after a car was deliberately driven into a crowd of anti-fascism protesters. His mother told local media that he did not openly express extreme views. But evidence is emerging of a "very misguided and disillusioned" young man. Mr Fields' former teacher characterised him as such to the Cinnicinati Tribune, and said his high school research made it clear he had beliefs that were "very much along the lines of the neo-Nazi movement". "A lot of boys get interested in the Germans and Nazis because they're interested in World War II. But James took it to another level." 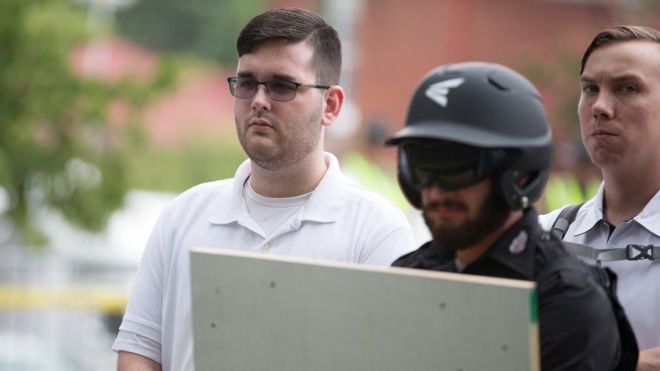 James Alex Fields Jr. pictured at "Unite the right" rally before the car attack. Standing in a white polo shirt.​
After enlisting in the military, Mr Fields was released in December 2015 for "failing to make training standards". Buzzfeed reports that a now deleted Facebook account appearing to belong to him had overt references to Nazism and a "Make America Great again" banner. It also had a photograph of the 20-year-old posing with a car resembling the one used in the attack and a variety of memes popular with the alt-right, including Pepe the Frog. Buzzfeed also posted Youtube footage appearing to show Mr Fields chanting homophobic slurs at counter-protesters at the "Unite the Right" rally hours before the attack. He was pictured at the event (second from left) carrying a shield with the logo of an openly fascist group: Vanguard America. 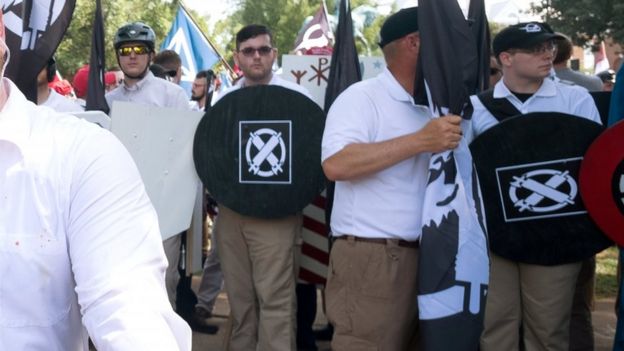 James Fields is pictured holding up a homemade shield with a logo of the Vanguard America group​
The group's website declares "America is under attack" and says: "If current trends continue, White Americans will be a minority in the nation they built. It's time to take a stand." They released a statement on Twitter denying James Fields had been a member. He has been charged with one count of second degree murder, three counts of malicious wounding and one count of failing to stop after a hit and run. Republican senator Ted Cruz called on the Department of Justice to prosecute the suspect for domestic terrorism. The FBI confirmed they had opened a civil rights investigation into the incident.

A 20-year-old man accused of ramming his car into a crowd of protesters at a white nationalist rally in Virginia has appeared in court via video from jail. James Alex Fields was denied bail as he was arraigned for second-degree murder, three counts of malicious wounding and one count of hit and run. Heather Heyer, 32, died and 19 were injured when a car hit demonstrators in Charlottesville on Saturday. Mr Fields is said to have harboured Nazi sympathies.

President Donald Trump has been criticised for not specifically denouncing the far-right elements in the weekend's march. But the White House has defended his remarks as explicitly condemning the white supremacy groups involved. Ken Frazier, CEO of drugs giant Merck, announced on Monday he would resign from the president's American Manufacturing Council over Mr Trump's response to Charlottesville. Mr Frazier, who is African American, tweeted he had "a responsibility to take a stand against intolerance and extremism".

James Alex Fields looked nervous and listless on the small monitor in the corner of the courtroom. Mostly he kept his head down, his eyes darting occasionally up towards the camera. He was wearing a striped jumpsuit and had the neat, buzzcut hairstyle favoured by many white supremacists and neo-nazis who have united under the banner of the so-called "alt-right". Judge Robert Downer read his charges - one count of murder, one count of hit and run, three counts of malicious wounding. Alex Fields spoke briefly to say he was employed by Securitas and Omni Ohio, could not afford a lawyer, and had no ties to Charlottesville. Judge Downer denied him bail, and revealed he could not be appointed a public defender because someone in the public defender's office was directly affected by the crime. His appointed lawyer, Charles Webster, named in court by the judge, had yet to be contacted to inform him of his latest client.

In 10 minutes it was over. Outside the court, known white nationalist Matthew Heimbach was shouting that the death of Heather Heyer was the fault of the police. "Nazis go home," the crowd chanted back at him. "I think I like it in Charlottesville," he said. "I think I'll stay." Attorney General Jeff Sessions on Monday said the deadly violence met "the definition of domestic terrorism", adding that the Justice Department was opening a civil rights investigation against into the event. "You can be sure we will charge and advance the investigation towards the most serious charges that can be brought because this is unequivocally an unacceptable evil attack," he said on ABC News' Good Morning America. He told the television programme that FBI agents from the terrorism and civil rights divisions were also investigating the matter.

Far-right white nationalists who attended rallies this weekend in Charlottesville, Virginia, did not cover their faces as they marched around with lit torches, chanting slogans like "you will not replace us". But they are now facing an online backlash, as Twitter users identify and denounce them. Calls have been made to have them kicked out of universities and sacked from their jobs. Cole White, one of those who attended the rally has now reportedly been fired by his employer - the Top Dog hotdog restaurant chain in Berkeley, California. The sacking came after he was identified by Yes, You're Racist, a Twitter user who has been publicly naming and shaming those who attended the rally under the hashtag #ExposetheAltRight. 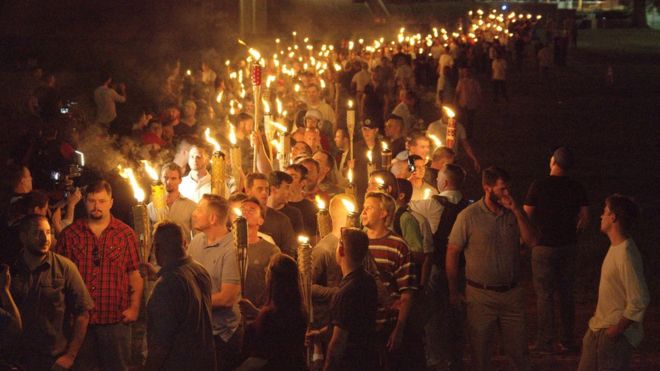 White nationalists carry torches on the grounds of the University of Virginia, on the eve of a planned Unite The Right rally in Charlottesville, Virginia​
Meanwhile, Peter Cvjetanovic, a 20-year-old student who was captured in one of the most widely shared photos, has defended his right to attend the "Unite the Right" rally, which centred around opposition to the removal of a statue of Civil War General Robert E Lee. The rally descended into violent street brawls between white supremacists and counter-protesters. One woman was killed when a car drove into a crowd of counter-protesters, and US President Donald Trump has come under criticism for failing to explicitly condemn white extremist groups, including neo-Nazis. Mr Cvjetanovic, who was also identified by Yes, You're Racist on Twitter, told local Nevada TV station KTVN Channel 2 that he understood an image of him that spread widely "has a very negative connotation". He added: "But I hope that the people sharing the photo are willing to listen that I'm not the angry racist they see in that photo." 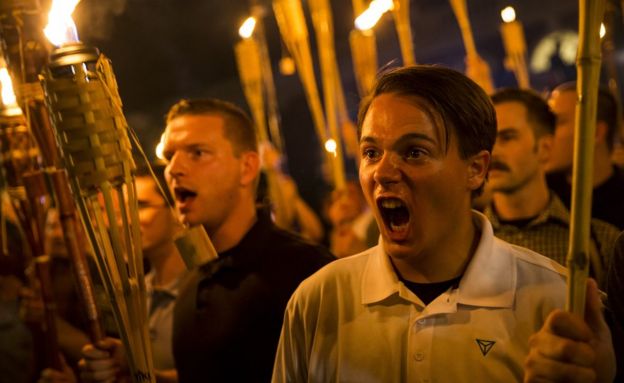 Peter Cvjetanovic seen yelling and holding a torch after marching through the University of Virginia campus​
The self-described white nationalist said he attended the march to send a message that "white European culture has a right to be here just like every other culture". People like him, he said, "just want to preserve what we have". He says he has received death threats. Soon after he was identified on Twitter, a photo surfaced appearing to show him with Dean Heller, a Republican Senator from Nevada, alongside other students. Mr Heller then distanced himself from the controversy. Mr Cvjetanovic is an undergraduate student at the University of Nevada, Reno, which is now facing calls to expel him. A petition has gathered 6,500 signatures. The university has released a statement, which did not name him, but said "racism and white supremacist movements have a corrosive effect on our society". It noted, however, that the university respects the peaceful exchange of different views and civil debate. 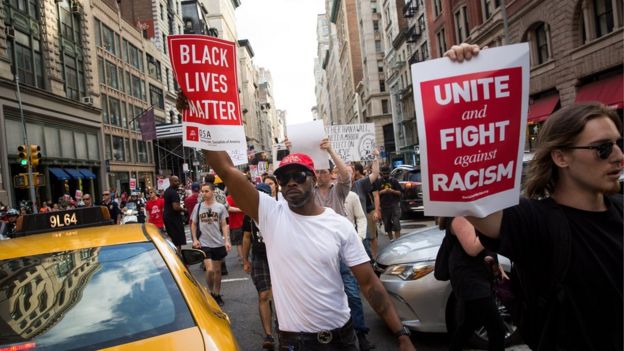 Vigils and marches were held on Sunday in different US cities​
The calls to have the white nationalist protesters - many of whom were young men - punished for their role in the rally is likely to add fuel to debates about free speech, especially on university campuses. Mr Cvjetanovic says that if the university expels him it would be a "clear violation" of his first amendment rights. Washington State University is also under pressure from some students after it was revealed its college Republican president had attended the rally. University president Kirk Shulz tweeted: "Universities are places where controversial voices must be heard - even those voices that many in our community disagree with."

The fall-out from the events in Charlottesville has also seen web hosting company GoDaddy expel neo-Nazi website the Daily Stormer, after it ran an article denigrating Heather Heyer, the woman who was killed on Saturday. In a related development, a post on the Daily Stormer front page claims the website has been hacked by Anonymous "in the name of Heather Heyer a victim of white supremacist terrorism". However, a major Twitter feed for Anonymous distanced itself from the hack - saying it might be a hoax. Meanwhile, a brand of "tiki torches" has distanced itself from marchers who wielded the outdoor lamps. "We do not support their message or the use of our products in this way," TIKI Brand said in a Facebook post.

Which of these monuments etc. must be erased and demolished?

Compilation: Evidence of Election Fraud Against Trump Voters, With Sources
2 3

These pharmaceutical companies are so greedy and tide to the cdc/dnc that...

Biden wants stimulus checks to keep coming next year, because, you know, we need to keep people away from work!