Virginia likely did not directly issue a permit for a specifically Nazi Rally, or Klan Rally: Complete with parade-goers in various states of battle-dress, doing Open-Carry about it. Local protestors would be said unimpressed with the parade as it finally unfolded.

The Alt-Right agenda, becoming White House Agenda, even eclipsed the diplomatic successes with China, reigning in North Korea. That barely got an Honorable Mention, even at the White House. So in a formerly Conservative House District, then turn of events so far is a Moderate Republican, running in November.

Trump is easily said to have surprised all the experts again. Instead of building a winning Coalition of outsiders, the Republicans first have to create a base of their own. Too many GOP are not on board, and so a former Democrat is now a better alternative to voting Republicans at the polls. California Democrats have targeted seven Republican House seats already. Even a California House Democrat is gaining national attention as a party spokesperson, alternative.

And that is near Beautiful Downtown Burbank, including its famous "Restaurant Row." Just for starters is a local McDonald's, and then it just keeps on going!

Gavin Newsome would make a great president. Articulate, intelligent, good demeanor, knows the issues.... everything Trump is not.
OP
M

Further GOP dilemma. People now follow the electoral make-up of the famous, unswerving Trump Base. It appears to be as much of abomination to the Republicans now, as it was in the Republican Presidential Primaries. Districts where it is active will likely stay home, if the Torchlight Agenda, is not met. Districts where it is not too active, have to disown it. It started out, "The Forgotten White Voter." It has become instead, "Abomination."

It is not likely that a moderate former Democrat attended my Klan or Nazi rallies--even in his youth(?). In the multitude of Blue Districts, keen for Hillary--even remorse has likely already turned to vindication. One of the Late Night people--Kimmel and Bits, or something--put it bluntly. "The Liberal were right."

Maybe the RNC Chair wasn't watching. Even the Republican Moderates and Conservatives were right. That is actually bad news for the now clearly Minority Party.

"Crow, James Crow: Shaken, Not Stirred!"
(Los Chargers now even play in Stadium near to Harbor: And to "Lucky Lady" Casino. Lands of Many Nations can take America Back(?)!)

Location
North beyond the Wall

A popular Republican Mayor in Utah, won a Republican Primary in Utah, what a shocker! obviously a clear indication that the Republicans should just throw in the towel and cede Utah to the Democrats. 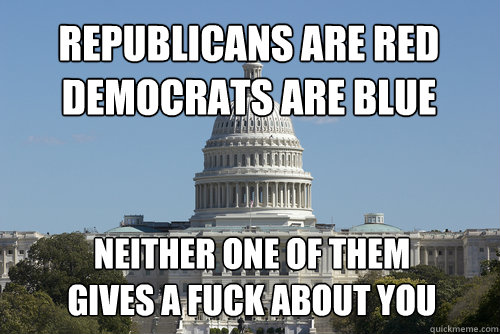 And Even Trump disbanded all the business councils since all the Republicans were leaving in droves, taking all their partisans with them!

"Crow, James Crow: Shaken, Not Stirred!"
(Great White Yellow Hair In Washington: Take Away Ball, and Go. . .To Jersey. . . help with throwing people off of beaches!)
You must log in or register to reply here.

Years ago, Trump fought against racism

GOP Takes Back Another House Seat