Nogales, Arizona &#8211; Authorities have found that Mexican drug dealers have tunneled into America from Mexico under a city street in Nogales and on that street were parking meters. The drug dealers cut out a square in the pavement which they made like a manhole cover.

The drug smuggler cars would then park in the parking space and put a quarter in the parking meter and wait. These cars had been specially designed to have a false bottom. The smugglers in the tunnel would load up the cars with marijuana, cocaine, heroin, opium&#8230; Then the car would simply drive off to its destination most likely in neighboring states. Who knows they may have been delivering guns, ammo & money to the tunnel and doing an exchange.

Law enforcement found 16 tunnels leading to 18 parking meters in Nogales. It was kind of like a drive through window for the drugs lords. Homeland Security has removed the parking meters and the city is now losing revenue to the tune of about $9k a year. Just when you think you&#8217;ve heard it all.

&#8220;The parking meters on International Street, which hugs the border fence in Nogales, cost 25 cents. Smugglers in Mexico tunneled under the fence and under the metered parking spaces, and then carefully cut neat rectangles out of the pavement. Their confederates on the U.S. side would park false-bottomed vehicles in the spaces above the holes, feed the meters, and then wait while the underground smugglers stuffed their cars full of drugs from below.

When the exchange was finished, the smugglers would use jacks to put the pavement "plugs" back into place. The car would drive away, and only those observers who were looking closely would notice the seams in the street.&#8221;
Last edited: Oct 14, 2011
In the U.S., 2000 kids go missing each day. LINK
Immigration Customs and Enforcement: 1-866-347-2423
Report Anonymously, http://www.ice.gov/index.htm

Again, this is a drug problem, not an immigration problem. If we did not have insane drug laws, the smuggling across the border would not be so lucrative.
Men build too many walls and not enough bridges.

If we didn't have such porous border maybe the drugs wouldn't be able to get into America to create such a problem. The clear and simple solution to a whole lot of problems is to close the border with Mexico! We need to build a wicked fence and guard it!

The tunnels could have been used for people too. They could be used to transport small children to Mexico to export to international pedophile rings. There are about 2000 kids a day snatched in America where do they go??? Link
Link
In the U.S., 2000 kids go missing each day. LINK
Immigration Customs and Enforcement: 1-866-347-2423
Report Anonymously, http://www.ice.gov/index.htm

Everyone should call their politician and bitch about closing the borders and deporting illegal aliens. We should put the troops on the border and guard it closely to stop the flow of the drug traffic and human smuggling.
In the U.S., 2000 kids go missing each day. LINK
Immigration Customs and Enforcement: 1-866-347-2423
Report Anonymously, http://www.ice.gov/index.htm

The smugglers built a house to hide the northern entrance to the 400-yard (365 meters) tunnel in Calexico, the U.S. Attorney's Office for southern California said. The southern end of the tunnel came up in El Sarape restaurant in Mexicali, authorities said. It is the first smuggling tunnel found in more than 10 years in Calexico, a small city of about 40,000 people some 120 miles (193 km) east of San Diego, but the 12th discovered along Mexico's border with California since 2006. The rest of the tunnels were found in the San Diego area. 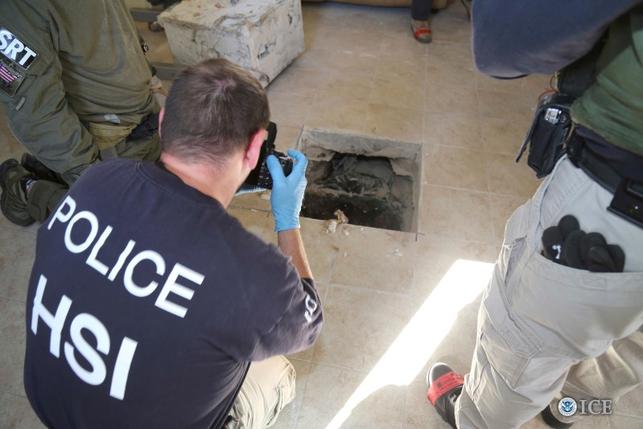 The smugglers purchased the land last April and by the time construction wrapped up in December, federal investigators were using wiretaps and watching activity at the house, charging documents said. "This house and tunnel were constructed under the watchful eye of law enforcement," said Laura Duffy, U.S. Attorney for southern California. "For the builders, the financiers and the operators of these passageways, there is no light at the end of the tunnel." Federal agents continued to monitor the house, a separate safe house in Calexico and four suspects until the first loads of marijuana came through at the end of February. 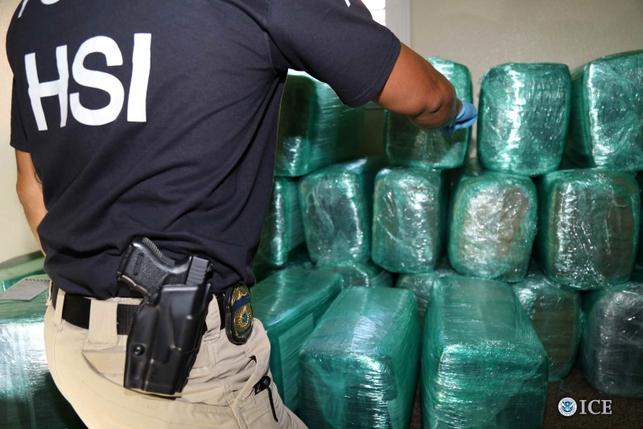 A U.S. Homeland Security Investigations (HSI) Special Response Team agent is shown processing evidence during investigation of a cross-border tunnel linking Calexico, U.S. and Mexicali, Mexico in Calexico, California​
On Mar. 7, investigators seized 1,350 pounds of pot that came through the tunnel as it was being transported through the Los Angeles area, according to federal documents. On Tuesday, a mother and daughter who were allegedly part of the ring were arrested in nearby Nogales, Arizona. On Wednesday, federal investigators arrested two men in Calexico - one at the tunnel house and one at the safe house - and seized an additional 1,532 pounds of marijuana from the tunnel. The suspects will be charged with conspiracy to import and distribute marijuana, prosecutors said.

Four people were arrested after the tunnel was discovered underneath a three-bedroom home that sits about 300 yards from the border. The other end of the tunnel was inside a restaurant in Mexicali, Mexico. The U.S. Department of Homeland Security said investigators seized thousands of pounds of marijuana with a street value of about $6 million. 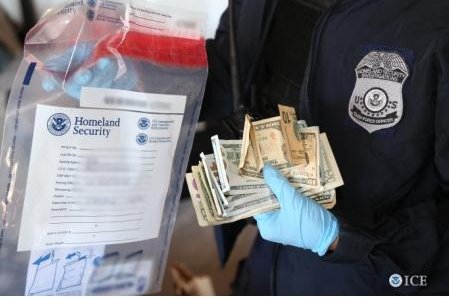 Federal investigators uncovered a 415-yard tunnel under a newly constructed home in southern California leading to a restaurant in Mexico and seized thousands of pounds of marijuana.​
"For the builders, the financiers and the operators of these sophisticated tunnels, there is no light at the end of the tunnel. We will seize your drugs and your tunnel before you even have a chance to use it," U.S. Attorney Laura Duffy of Southern California said. Investigators said mother and daughter Eva Duarte De Medina and Marcia Manuela Duarte-Medina purchased the land, paying $240,000 in April. They were arrested in Arizona. Joel Duarte Medina and Manuel Gallegos Jiminez were arrested in Calexico.

The home was built from October through December for a total cost of $86,000. The property owners allegedly told the contractors to leave a space in the concrete foundation in the front room of the home for a floor safe. The tunnel entryway is a three-foot-wide hole with a shaft that descends 32 feet. It leads into passageway with a rail system, lighting and electricity. The tunnel passes underneath several streets and a 14-foot border fence.

New CIS Report Confirms That Every State Is a Border State

I put this on Sub stack for what it's worth.
2

Democrats, Grow Up! Enough of the Criminal Tantrums When You Don't Get Your Way!
2 3

Just when I thought it couldn't get any worse
2