very true
"A lie ain't a side of a story. It's just a lie." snoop the wire

I would propose that every adult understands children. After all, we were all a child at some point in time. It is just that some people get reminded of it more often than others.
Life is a never ending sequence of unexpected events which occur at unusual moments with unanticipated consequences...and that is what makes it fun.

I prefer to be referred to as Child"free", not childless.

I remember 7, when I accidentally set the Christmas tree on fire.
Life is a never ending sequence of unexpected events which occur at unusual moments with unanticipated consequences...and that is what makes it fun.

Kindergarten. Bell bottom pants, polyester turtle necks, napping on the mats.
Not that I speak in respect of want: for I have learned, in whatsoever state I am, therewith to be content.Philippians 4:11 King James Version

i remember 5. i remember going to kindergarten for the first time. and i remember the pink and white bicycle i got for my 5th birthday.
"Trust none of what you hear And less of what you see" Springsteen

Zander said:
I prefer to be referred to as Child"free", not childless.

The only thing necessary for the triumph of evil is for good men to do nothing. --Edmund Burke

I do. That was the year they took my younger brother's pacifier away. He slept in the same room as me.

Remember that parents are bringing their out-of-control children to these "child-free" professionals who supposedly don't know what they're talking about.

If the parents, who have children, are supposedly so knowledgeable about children, why can't they control their children?
The only thing necessary for the triumph of evil is for good men to do nothing. --Edmund Burke

I remember being a baby. S'truth.

While there is some truth to this article, there are a few things very wrong about it.

Make that 3 kids that have not been diagnosed with ADHD. Mine hasn't been.

ADHD is usually diagnosed by pediatricians.

That's right, by people that are not really qualified to make that diagnosis in children that are usually at the wiggle worm stage. Many of these people do not want that kind of power. Part of this too falls on the teaching to the test attitude in our education system that requires kids to remain still in kindergarten and first grade more than they should. If you don't have kids, you can access the curriculum on your state department of ed. website. So, the teacher may make a referral. That said, if you have a kid with a wrong diagnosis it usually doesn't take that long to figure it out. Ritalin has the opposite effect on kids that don't need it. It operates like speed-which is why it is called the playground drug. Another problem is the zero tolerance attitude in schools.

No, judges do not always buy that. In fact, last year or year before there was a ruling in Florida that told the Department of Children and Family Services that they could not have their kids medicated simply 'cuz they wanted to. And if a kid has been diagnosed with ADHD by a pediatrician, the judge may order a psych evalutation to determine if the underlying issues require medication at all and/or to see a neurologist. Does the Judge rely on the psychologist and/or psychiatrist?

Yes, indeedy, otherwise the judge would be a psychiatrist or psychologist. They are not. That should be pretty clear. Public defenders run the age scale and may or may not have children. If you live in a state that treats your public defenders like crap and do not want to pay them then do not be surprised if, after having acquired experience, they take a better opportunity. There are those that believe in what they are doing. These jobs don't leave a whole lot of room for a life outside of the job. That is it. The job is your life. It is too exhausting to do anything else afterward.

By the same token, sometimes not having any children can make for a crappy person working within the system. It's like watching a kid flip out in the middle of a store that is screaming and crying and throwing a tantrum only to have some fool give you dirty looks and say a bunch of stuff that retaliation might put you in prison for. You should only take a small child to a minimum of three different places a day. The problem is..........you work 6 days a week and you have to pay bills and acquire groceries and hit Target in one shot or your household is screwed for the next two weeks. It boils down to "world view" and should be graded on an individual basis.

I think many kids are over diagnosed with this and bipolar and I find it odd. So, if the courts are regulated maybe, just maybe, this is something that the general public is getting taken for a ride on their ownish.
Last edited: Oct 6, 2011
If your path demands you to walk through hell, walk as if you own the place.

Ok...it was my sister who set the Christmas tree on fire, I took the blame for it because I had already cooked her Barbie doll in her 'Easy Bake Oven'. It seemed like the fare thing to do.
Last edited: Oct 6, 2011
Life is a never ending sequence of unexpected events which occur at unusual moments with unanticipated consequences...and that is what makes it fun.

There are times that I think that those who have remained child free are the people that should be having children instead of the those that insist on having them.

Sometimes, and I know this is horrible, wrong damn group.
If your path demands you to walk through hell, walk as if you own the place.

Same here SB.......I don't recall any part of my life before the second grade~
PLEASE BE PATIENT
I'm Fucking Things Up As Fast As I Can​

I think it's more common that childless adults don't understand parents, or the challenges of parenting.

Based on the ignorant nonsense that some folks have posted here -- how they'd raise their children to never be annoying in public (for example) if they had kids -- that's fairly obvious, actually.

Parental nurturing is so important. 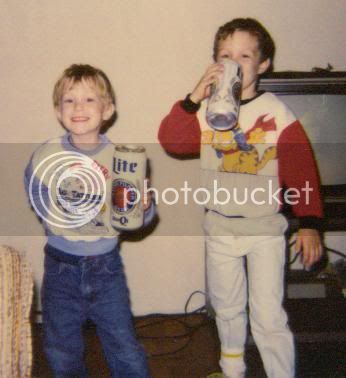 Dealing with kids is extremely difficult, once you have been an adult for a while you forget that way of thinking.
You must log in or register to reply here.

U.S. Health Panel to Men: No More PSA Tests For You!

Flow State vs. Hyperfocus: On Channeling Your Unsteady ADHD Attention

L
Is it possible to restore the child tax credit back to where it was?
4 5 6