How fast can you guess these words?

Don't worry. You don't have Alzheimer's.
You are just a pervert.

Now i know all of you failed... so come on fess up!

You should be able to have sex randomly, anytime you want....
OP
S

You should be able to have sex randomly, anytime you want....
Click to expand...

I went with fork, but then I lost interest.
W

The research in Neuron identifies mutations that affect the build-up of certain proteins in the brain. High levels of these tau proteins increase the chance of having the disease. UK experts said the study could help understand the changes that occur in the brains of Alzheimer's patients. Tangles of a kind of tau called phosphorylated tau (ptau) are a hallmark of the disease. 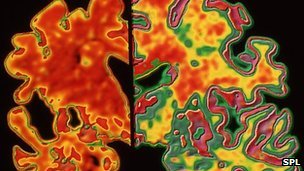 One of the new gene variants identified by the Washington University School of Medicine team was also shown to be linked to a small increased risk of developing Alzheimer's and a greater risk of cognitive decline. The team used genetic information from more than 1,200 people, significantly larger than previous studies in this area. Dr Alison Goate, who led the study, said: "We anticipate that knowledge about the role of these genes in Alzheimer's disease may lead to the identification of new targets from therapies or new animal or cellular models of the disease.

UK experts said the study adds to the number of genetic markers that have been linked to the development of Alzheimer's disease. Dr Doug Brown, director of research and development at the Alzheimer's Society, said: "In discovering new genes that have a link to Alzheimer's, this robust study helps scientists to better understand the way the brain changes when dementia develops. "Research such as this may in the future help us to engineer treatments aimed at stopping such changes and therefore slowing or stopping the effects of dementia."

He added: "These new gene markers, as important as they are, are likely to be a few of many that might affect a person's risk of developing Alzheimer's. "However, it is important to stress that lifestyle factors also play a role, and research has shown that eating a balanced diet, exercising regularly, not smoking, and getting your blood pressure and cholesterol checked regularly are key ways to reduce your risk of dementia."

For Some, Mild Slips of Memory May Be Very Early Alzheimer's
July 17, 2013  For years, doctors have dismissed patients' worries about mild slips of memory as a normal part of aging. Now, as the focus in Alzheimer's research moves toward early diagnosis, researchers are looking for ways to tell whether some of these senior moments are an early sign of the disease.

The idea is so new that scientists can't even agree on what to call these memory complaints among people who are still cognitively normal. But experts gathered at the Alzheimer's Association International Conference in Boston say evidence is growing that it may be possible to couple certain patterns of memory lapses with genetic markers or changes in the brain and spinal fluid to better predict which individuals are displaying the earliest symptoms of Alzheimer's. Finding people who are just beginning to develop the disease is important as companies struggle to find treatments that can prevent or delay the disease. In the past 12 months, several high-profile clinical trials testing drugs in people with mild to moderate Alzheimer's failed to show a benefit. Scientists believe that may be because the drugs are being tried too late, when the disease has already killed off too many brain cells.

Last week, Eli Lilly and Co. announced it will start a new clinical trial of its experimental Alzheimer's drug solanezumab focusing only on patients with mild signs of the disease, after two late-stage studies of the treatment in people with more advanced disease failed to show a benefit. Dean Hartley, director of science initiatives at the Alzheimer's Association, said scientists are just beginning to quantify whether anecdotal reports of memory loss have any bearing on whether a person ultimately develops dementia. The difficulty is that many things can cause temporary memory slips, including sleeplessness, depression, stress and some medications. The question is which ones are indicative of underlying pathological changes, he said.

To study the problem, Dr. Rebecca Amariglio, a neurologist at Brigham and Women's Hospital in Boston, took a sample of 189 clinically normal adults over age 65 and asked them questions about their memories. Researchers also did brain scans using a radioactive tracer that can detect the presence of a protein called beta amyloid that is believed to be an early sign of Alzheimer's disease. The team found that the people who reported the most trouble with their memories also had amyloid buildup in their brains. Subjective concerns may be an early indicator of Alzheimer's pathology, said Amariglio, who is presenting her findings at the Alzheimer's meeting this week. Questions used by the team covered a whole range of common memory issues, such as misplacing belongings or forgetting details of conversations. Such lapses can of course be just an artifact of people leading busy lives. The trick is sorting out which memory complaints are meaningful and which aren't.

Dr. Richard Kryscio, an expert in biostatistics at the University of Kentucky, has been tracking memory complaints in more than 1,000 cognitively healthy people in their 60s and 70s for more than a decade. People who sign up for the study visit the center once a year to take a battery of cognitive tests. Each person is asked whether he or she has noticed any decline in memory since the last visit. Kryscio reported results of the first 531 people at the Alzheimer's meeting. The group started the study at an average age of 73. Over the course of 10 years, more than half of study participants said they noticed a change in their memories. Among this group, individuals were also twice as likely to be diagnosed with dementia or a precursor to dementia called mild cognitive impairment (MCI) in follow-up visits as those who reported no change.

More For Some, Mild Slips of Memory May Be Very Early Alzheimer's
Click to expand...

More improving news about the hoax
5 6 7

J
The Romans Road {leading to the salvation of the soul}

If it’s so terrible to be black in America why do all part-blacks identity as black?
3 4 5

For your consideration Re: Covid