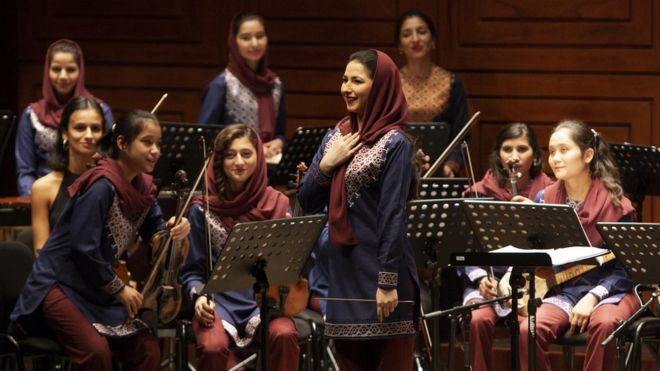 Five years ago, a unique all-female orchestra was formed in Afghanistan, a nation where only a few years previously music had been outlawed and women barred from education. Now Zohra is visiting the UK for the first time.

No-one claims that in Afghanistan, the Taliban influence has been rooted out entirely. Violence continues. But two decades ago, the Afghanistan National Institute of Music would have been unthinkable.

ANIM was founded in 2008, with international support, to bring music education to young Afghans. Not long before that, the Afghan capital Kabul had finally been wrenched from the grasp of the fundamentalist Sunni Muslim Taliban.

In the Taliban years, music - once a thriving and rich part of Afghan culture, admired around the world - had all but disappeared.

Today in Kabul, ANIM teaches music skills to some 250 young people, both male and female. That figure is about to rise to 320 and there are plans to expand to cities such as Herat, Mazar-e Sharif and Jalalabad.

A good news story. These sort of visits need to be encouraged to bring that country into the C21st.

Elsewhere the Afghan national side is playing the Irish in a Test match and look like winning. It will give the game there a massive boost.
P

They were not allowed to do so under the Taliban. Its progress.
You must log in or register to reply here.