Mexican drug cartels have infiltrated up to Pennsylvania...

Authorities: Mexican drug cartels are a Pennsylvania presence
Monday, March 18, 2013, Pa. Attorney General Kathleen Kane caused a stir when she told a legislative budget hearing she was losing sleep over Mexican drug cartels; Mexican cartels are the top wholesale suppliers of cocaine, heroin, and methamphetamine to the Philadelphia region; Many drugs have been intercepted on Route 1 and I-95, going both ways between New York and Philadelphia.

Pennsylvania Attorney General Kathleen Kane caught more than a few people by surprise last month when she told a legislative budget hearing she was losing sleep over Mexican drug cartels. "They are in Pennsylvania - they are taking over our neighborhoods," Kane reportedly told the Senate Appropriations Committee. Pennsylvania State Police Commissioner Frank Noonan, asked later about the issue, saw less of a threat. "Coming over and taking over drug sales in Pennsylvania? No. We don't see that," he said. "They are the source of drugs but have not really established that presence in Pennsylvania." There may be a quibble in the capital about Kane's wording, but federal, state, and local law enforcement authorities agreed Mexican cartels are the top wholesale suppliers of cocaine, heroin, and methamphetamine to the Philadelphia region. "If you're buying cocaine or high-level weed anywhere in the United States, you are buying it from the Mexican drug cartels," Chester County District Attorney Tom Hogan said.

And that has been a long-running trend. "This has been building up for the past decade," Kane said during a recent interview in Montgomery County, with Mexicans overshadowing Dominican and Colombian trafficking organizations. Colombia still produces the bulk of cocaine and heroin that ends up here, but it comes by way of Mexican cartels that have a stranglehold on the U.S. drug market. Mexican wholesale drug-trafficking organizations have grown since 2008, according to the U.S. Department of Justice's 2011 Eastern Pennsylvania drug and gang threat assessment. "Mexican [organizations] are the dominant wholesale suppliers of cocaine and heroin to drug-distribution groups in Philadelphia and Reading and in surrounding areas, such as Norristown, Montgomery County, and southern Chester County," it said. 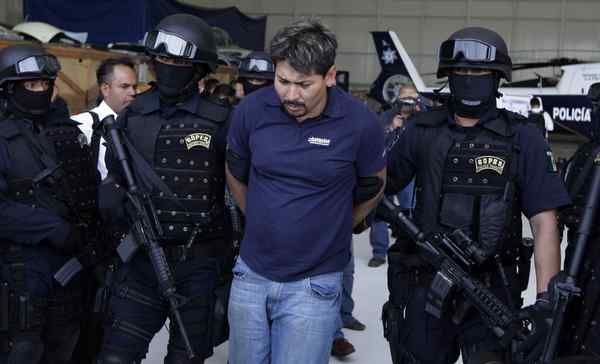 Montgomery County District Attorney Risa Vetri Ferman said Norristown was "a place where we are vigilant" about removing opportunities for the illegal drug trade - whether they are homegrown, as most are, or come from Mexico. "I don't think it's an issue of [Mexican cartels] taking over," Ferman said. "Our approach in Montgomery County has always been to make this an uncomfortable place for drug traffickers, wherever they come from." In late 2010, Montgomery County authorities arrested Mexican-born Charbel Pita Rosales and accused him of operating a drug gang out of the Marquis Apartment complex in King of Prussia. Prosecutors alleged Rosales and at least six other men were distributing more than 22 pounds of cocaine a month locally. Using telephone wiretaps, investigators found suggested connections to La Familia Michoacana, a violent Mexican cartel.

Rosales is scheduled to be sentenced next month, according to court documents; he was convicted last year of numerous felonies related to the drug operation. Daniel Sweeney, a Bucks County deputy district attorney, said there was no evidence there of any great Mexican drug cartel presence. But police have intercepted marijuana, heroin, and cocaine that passed through Arizona, one of the transportation layovers for the cartels. Many drugs have been intercepted on Route 1 and I-95, going both ways between New York and Philadelphia, he said. Hogan said southern Chester County was part of the East Coast pipeline along I-95.

September 2011,So Far Obama's Most Embarrassing Month In Office ?

Don’t let the rightwing fool you: the economy is doing well under Biden
30 31 32

Would you date a Gypsy woman from Eastern Europe?