This is a 'media-culture love-letter' inspired by the politics-metamorphosis film Dave.

How can we coordinate social commentary with youthful imagination in this modern age of 'armchair-sarcasm' (e.g., 'TrumpUSA')?

Politicial cartoons became so 'edgy' during the Presidency of Donald Trump that everyday citizens were pondering the true value of pedestrianism in the modern age of media. Was sarcasm a 'staple' of political discourse now? What would be the historical account of the Salem Witch Trials and McCarthyism (experiences that affected America's view of society free-speech)? 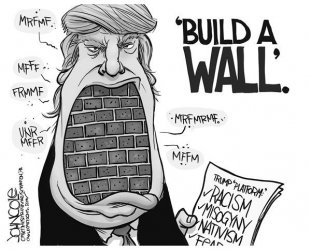 Three 'typical' American citizens (a movie star making films about cultural 'norms,' an Internet-blogger and Ivy League graduate writing about consumerism absurdism, and a movie star and TV actor making shows/films about 'pedestrianism wit') were in a 'social position' to express symbolic views about 'traffic IQ' (e.g., 9/11). The shock of 9/11 changed the way the modern world was conceptualizing 'national contracts,' and anti-Western sentiments in the new age of globalization politics (i.e., European Union, NATO, Wall Street).

As America was becoming a proverbial 'Platonic camp,' a strange 'phantom' was haunting the forest of the Pine Barrens in New Jersey. The 'Phantom' wore a hockey-mask and carried what seemed to be a machete and would lurk around the woods and terrorize campers/travellers looking to bond with Mother Nature. How could America become a 'pro-democracy camp' if the Phantom undermined securities regarding forest-safety? This was the new 'gossip-negotiation,' and it seemed like all the 'socialization drama' might even invoke the spirit of the adversarial AntiChrist (the Biblical 'apocalypse avatar' signifying a fear of complete terrorism). Hollywood was planning a re-make of the 1976 'rapture-confrontation' film The Omen (starring Leo DiCaprio).

Racism may be the new "patriotism"....

Biden using your money for hotels for illegals while homeless Vets sleep on the streets. Is that the new American Way?
2 3 4

A moment ago
LibertyKid
L

"Where there are fathers, there are no gang members" ~Shawn James

The Left Has A Pedophilia Problem, And It’s Out In The Open
2 3