I wonder how big it will be, and how many prog ghouls will try to disrupt it? Any guesses?

Trump Supporters Plan Massive March in D.C. – Mr. President We Have Your Back

The impeachment effort against President Donald Trump may be popular among Democrats but it has also energized his supporters, including thousands of women who plan to show up at the nation’s capital on October 17 for the March for Trump.
“We are coming to Washington to support our president — to stand with him through this impeachment charade,” Amy Kremer, Tea Party activist and founder of Women for America First, the organization behind the march, said on SiriusXM’s Breitbart News Saturday with host Matt Boyle.
“[Democrats are] trying to subvert the will of the people and overturn the vote and people are as mad as hell about it,” Kremer said, adding, “It absolutely is a partisan witch hunt and the American people can see right through it.”

If Rolling Thunder shows up as reported, that's a half-million right there.
OP

Wish I could go.

Hey I'm not doing anything that week..... 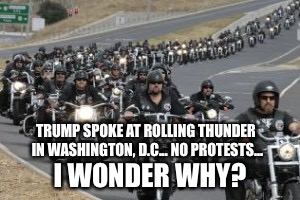 Democrats panic about 2020 election outcome after ex-Obama economist Jason Furman predicts: “We are about to see the best economic data in history"

A moment ago
DOTR

Video shows Ahmaud Arbery Was caught breaking and entering an unfinished property, then towards McMichael‘s house
98 99 100

The Truth About Political Polling
2