Purim in United States
Purim marks the Jewish people’s deliverance from a royal death decree around the fourth century BCE, as told in the Book of Esther. Many Jewish Americans celebrate Purim on the 14th day of the month of Adar in the Jewish calendar, which is in February or March in the Gregorian calendar. According to many sources, the celebrations begin at around sunset on the 13th day of Adar, while other sources mention that Purim is observed on the 15th day of Adar. 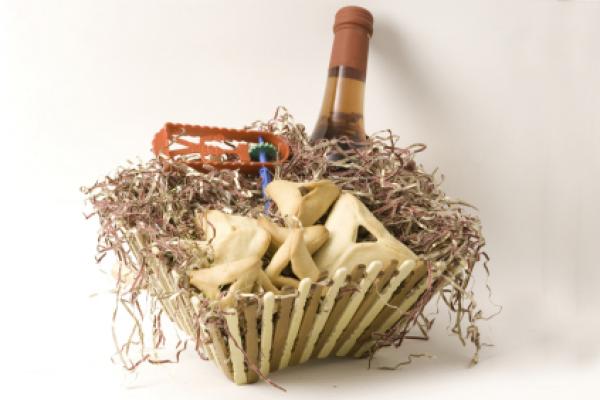 Gift baskets containing food are given during Purim.
©iStockphoto.com/sterling_photo
What do people do?
Many Jewish people, especially children, in the United States use this event as an opportunity to listen to theMegilla (or Megillah) to relive the events that are told about the story of Esther, Mordecai and Haman. It is customary to twirl graggers (Purim noisemakers) and stamp one's feet when Haman’s name is mentioned.

Many Jewish people give to the needy around this time of the year. Food baskets or food gifts are also given away. It is a time for people to celebrate and be merry. So some Jewish schools hold celebrations to remember the past and their heritage. Other groups or organizations hold Purim carnivals filled with activities, costumes, food and games. Special prayers, particularly the Al HaNissim prayer are also included in evening, morning and afternoon prayers.

Halakha (Jewish Law) dictates that a Jewish man should drink so much on Purim so that he can not tell the difference between the truth and a lie.

No kidding, that's that law, and I intend to obey it!

Now it came to pass in the days of Ahasuerus, (this is Ahasuerus which reigned, from India even unto Ethiopia, over an hundred and seven and twenty provinces)

That in those days when the king Ahasuerus sat on the throne in his kingdom, which was in Shushan the palace,
in the third year of his reign, he made a feast unto all his princes and his servants; the power of Persia and Media, the nobles and princes of the provinces, being before him:

When he shewed the riches of his glorious kingdom and the honour of his excellent majesty many days even an hundred and fourscore days.

Statistikhengst said:
Halakha (Jewish Law) dictates that a Jewish man should drink so much on Purim so that he can not tell the difference between the truth and a lie.

No kidding, that's that law, and I intend to obey it!

Why it's my fave holiday Pity I don't drink.
OP

And when these days were expired, the king made a feast unto all the people that were present in Shushan the palace, both unto great and small, seven days, in the court of the garden of the king's palace; Where were white, green, and blue, hangings, fastened with cords of fine linen and purple to silver rings and pillars of marble: the beds were of gold and silver, upon a pavement of red, and blue, and white, and black, marble. And they gave them drink in vessels of gold, (the vessels being diverse one from another,) and royal wine in abundance, according to the state of the king. And the drinking was according to the law; none did compel: for so the king had appointed to all the officers of his house, that they should do according to every man's pleasure. Also Vashti the queen made a feast for the women in the royal house which belonged to king Ahasuerus.

On the seventh day, when the heart of the king was merry with wine, he commanded Mehuman, Biztha, Harbona, Bigtha, and Abagtha, Zethar, and Carcas, the seven chamberlains that served in the presence of Ahasuerus the king,

To bring Vashti the queen before the king with the crown royal, to shew the people and the princes her beauty: for she was fair to look on.

But the queen Vashti refused to come at the king's commandment by his chamberlains: therefore was the king very wroth, and his anger burned in him.

Then the king said to the wise men, which knew the times, (for so was the king's manner toward all that knew law and judgment:

And the next unto him was Carshena, Shethar, Admatha, Tarshish, Meres, Marsena, and Memucan, the seven princes of Persia and Media, which saw the king's face, and which sat the first in the kingdom)

What shall we do unto queen Vashti according to the law, because she hath not performed the commandment of the king Ahasuerus by the chamberlains?

For this deed of the queen shall come abroad unto all women, so that they shall despise their husbands in their eyes, when it shall be reported, The king Ahasuerus commanded Vashti the queen to be brought in before him, but she came not.

Likewise shall the ladies of Persia and Media say this day unto all the king's princes, which have heard of the deed of the queen. Thus shall there arise too much contempt and wrath.

If it please the king, let there go a royal commandment from him, and let it be written among the laws of the Persians and the Medes, that it be not altered, That Vashti come no more before king Ahasuerus; and let the king give her royal estate unto another that is better than she.

And the saying pleased the king and the princes; and the king did according to the word of Memucan:

After these things, when the wrath of king Ahasuerus was appeased, he remembered Vashti, and what she had done, and what was decreed against her.

Then said the king's servants that ministered unto him, Let there be fair young virgins sought for the king:

And let the king appoint officers in all the provinces of his kingdom, that they may gather together all the fair young virgins unto Shushan the palace, to the house of the women, unto the custody of Hege the king's chamberlain, keeper of the women; and let their things for purification be given them:

And let the maiden which pleaseth the king be queen instead of Vashti. And the thing pleased the king; and he did so.

This is a film that depicts the story of Esther - although if you decide to view it - you should also read the Book of Esther here today so that you will see where the film makers take liberty with the Scriptures of God. The scene at end with exchange between Haman and Esther never happened (you'll learn here on this thread what really happened) - so watch the film - and then read the scriptures here - you'll see what they embellished, deleted or changed.

And he brought up Hadassah, that is, Esther, his uncle's daughter: for she had neither father nor mother, and the maid was fair and beautiful; whom Mordecai, when her father and mother were dead, took for his own daughter.

And the maiden pleased him, and she obtained kindness of him; and he speedily gave her her things for purification, with such things as belonged to her, and seven maidens, which were meet to be given her, out of the king's house: and he preferred her and her maids unto the best place of the house of the women.

Esther had not yet shewed her kindred nor her people; as Mordecai had charged her that she should not shew it.

And Mordecai walked every day before the court of the women's house, to know how Esther did, and what should become of her.

Now when every maid's turn was come to go in to king Ahasuerus, after that she had been twelve months, according to the manner of the women, (for so were the days of their purifications accomplished, to wit, six months with oil of myrrh, and six months with sweet odours, and with other things for the purifying of the women)

In the evening she went, and on the morrow she returned into the second house of the women, to the custody of Shaashgaz, the king's chamberlain, which kept the concubines: she came in unto the king no more, except the king delighted in her, and that she were called by name.

Now when the turn of Esther, the daughter of Abihail the uncle of Mordecai, who had taken her for his daughter, was come to go in unto the king, she required nothing but what Hegai the king's chamberlain, the keeper of the women, appointed. And Esther obtained favour in the sight of all them that looked upon her.
Esther 2:15
OP

So Esther was taken unto king Ahasuerus into his house royal in the tenth month, which is the month Tebeth, in the seventh year of his reign.

And the king loved Esther above all the women, and she obtained grace and favour in his sight more than all the virgins; so that he set the royal crown upon her head, and made her queen instead of Vashti.

Then the king made a great feast unto all his princes and his servants, even Esther's feast; and he made a release to the provinces, and gave gifts, according to the state of the king.

And when the virgins were gathered together the second time, then Mordecai sat in the king's gate. 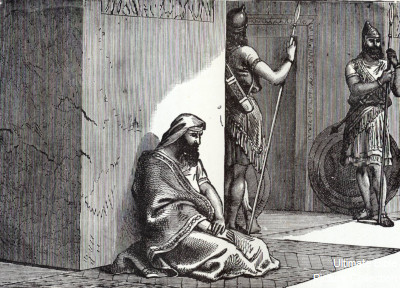 Easter and Its Pagan origins