I could not tell you of any particular course to develop the inner faculties, and permit me to say that if I knew of such I would be very reluctant to tell it, because it is full of danger. It is necessary first to understand philosophy, to understand yourself so far as it can be understood on this plane; to discipline one’s self; to develop virtue, attention, fortitude; then one is prepared to go further.
The best advice I can give you is to continue studying, but at the same time to add to it actual practice in the way of doing as much work as you can for other people.

To make our will strong we must have fewer desires. Let those be high, pure, and altruistic; they will give us strong will.

A Casebook of Encounters with the Theosophical Mahatmas

That is the title of a new book compiled by Daniel Caldwell. His Blavatsky Study Center is a treasury of Theosophy. Use the ORDER HERE link at his site to order a copy:

The Winter Solstice is sacred season, here is a Theosophist/Mystic with some of why that is so:

AE-George Russell was a great artist, mystic, theosophist and worker for brotherhood. Here he praises the value of Theosophy to the Dublin Lodge of the TS in 1894:

AE again on the Three Objects of the Theosophical Society:

Universal Unity and Causation; Human Solidarity; the Law of Karma; Re-incarnation. These are the four links of the golden chain which should bind humanity into one family, one universal Brotherhood. If the action of one reacts on the lives of all, and this is the true scientific idea, then it is only by all men becoming brothers and all women sisters, and by all practising in their daily lives true brotherhood and true sisterhood, that the real human solidarity, which lies at the root of the elevation of the race, can ever be attained. It is this action and interaction, this true brotherhood and sisterhood, in which each shall live for all and all for each, which is one of the fundamental Theosophical principles that every Theosophist should be bound, not only to teach, but to carry out in his or her individual life.

Here are some videos, three are in Portuguese:

Never trust satanists, so-called 'theosophy' is the highway to Hell 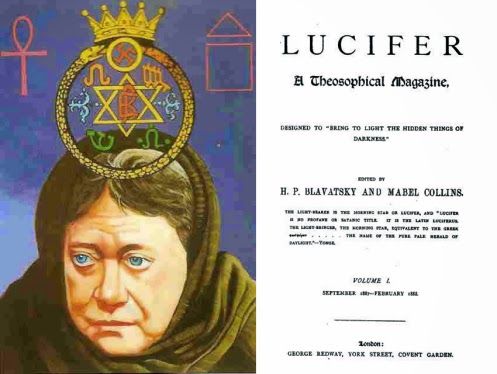 Ignorant nonsense. Never known or heard of any 'satanist' theosophists. Have been associated with theosophists for 50 years.
OP

Idyll of the White Lotus is a mystery tale set in ancient Egypt with a commentary by a theosophist.

There are three truths which are absolute, and which cannot be lost, but yet remain silent for lack of speech.

1. The soul of man is immortal, and its future is the future of a thing whose growth and splendour has no limit.
2. The principle which gives life dwells in us and without us, is undying and eternally beneficent, is not heard or seen, or smelt, but is perceived by the man who desires perception.
3. Each man is his own absolute lawgiver, the dispenser of glory or gloom to himself; the decreer of his life, his reward, his punishment.

These truths, which are as great as is life itself, are as simple as the simplest mind of man. Feed the hungry with them.

The Idyll of the White Lotus
OP

A new series of topically arranged writings from Blavatsky's Lucifer magazine that was started by her in 1887. The first and second volume are available:

Skull said:
A new series of topically arranged writings from Blavatsky's Lucifer magazine that was started by her in 1887. The first and second volume are available:

Here is the Introduction to volume II which has all of Blavatsky's editorials for over three years:

The Last Song of the Swan - Editorials, The Lucifer Collection, Volume II
OP

"Thoreau pointed out that there are artists in life,
persons who can change the colour of a day and make
it beautiful to those with whom they come in contact. We claim that
there are adepts, masters in life who make it divine, as in all other arts.

Is it not the greatest art of all, this which affects the very atmosphere in
which we live? That it is the most important is seen at once, when we
remember that every person who draws the breath of life affects the
mental and moral atmosphere of the world, and helps to colour the day
for those about him. Those who do not help to elevate the thoughts and
lives of others must of necessity either paralyse them by indifference, or
actively drag them down."
OP

SELFISHNESS, the first-born of Ignorance, and the fruit of the
teaching which asserts that for every newly-born infant a new soul,
separate and distinct from the Universal Soul, is “created”—this
Selfishness is the impassable wall between the personal Self and Truth.
It is the prolific mother of all human vices, Lie being born out of the
necessity for dissembling, and Hypocrisy out of the desire to mask Lie. It
is the fungus growing and strengthening with age in every human heart
in which it has devoured all better feelings. Selfishness kills every noble
impulse in our natures, and is the one deity, fearing no faithlessness or
desertion from its votaries. Hence, we see it reign supreme in the world
and in so-called fashionable society. As a result, we live, and move, and
have our being in this god of darkness under his trinitarian aspect of
Sham, Humbug, and Falsehood, called RESPECTABILITY.

The greatest philosopher of the
pre-Christian era mirrored faithfully in his works the
spiritualism of the Vedic philosophers who lived thousands
of years before himself, and its metaphysical expression.
Thus is warranted the inference that to Plato and the ancient
Hindu sages was alike revealed the same wisdom. So
surviving the shock of time, what can this wisdom be but
divine and eternal?

What was a demonstration and a success in the eyes of
Plato and his disciples is now considered the overflow of a
spurious philosophy and a failure. The scientific methods
are reversed. The testimony of the men of old, who were
nearer to truth, for they were nearer to the spirit of nature --
the only aspect under which the Deity will allow itself to be
viewed and understood -- and their demonstrations, are
rejected. The whole of the present work [Isis Unveiled]
is a protest against such a loose way of judging the ancients.

There is but ONE Eternal Truth, one universal, infinite and changeless Spirit of Love, Truth and Wisdom, impersonal, therefore bearing a different name with every nation, one Light for all, in which the whole Humanity lives and moves, and has its being. Like the spectrum in optics, giving multicoloured and various rays, which are yet caused by one and the same sun, so theologies and sacerdotal systems are many.

Blavatsky
You must log in or register to reply here.

Everything was Created for the Glory of God
2 3

How can anyone deny the reality of Creation?
2

P
Am I the only one tired of people speaking about being Black or White as a race?
2

J
One of the unintended, or perhaps very much intended, consequences of the proposed Equality Act is scaring women and gays out of their wits!
4 5 6

Breaking News Trump used the DOJ to investigate members of Congress, their families and even a minor child.
16 17 18