An astro-imaging student of mine posted some of his latest work of the midnight to early morning targets of Jupiter, Saturn and Mars to my private astronomy group. I've been coaching him for about ten years or so and he is now pretty thick with a few folks at NASA and has done some still image and video work for them promoting the Apollo and other lunar missions.

He took these images around June 25 with an 11-inch CAT Celestron SCT telescope using digital camera (I didn't ask him what he is using now, but typically a video camera which then you stack the best several hundred to few thousand frames in order to integrate around the best moments of seeing).

His originals were pretty tightly cropped, I'll post those then my reprocess of each including a few comments: 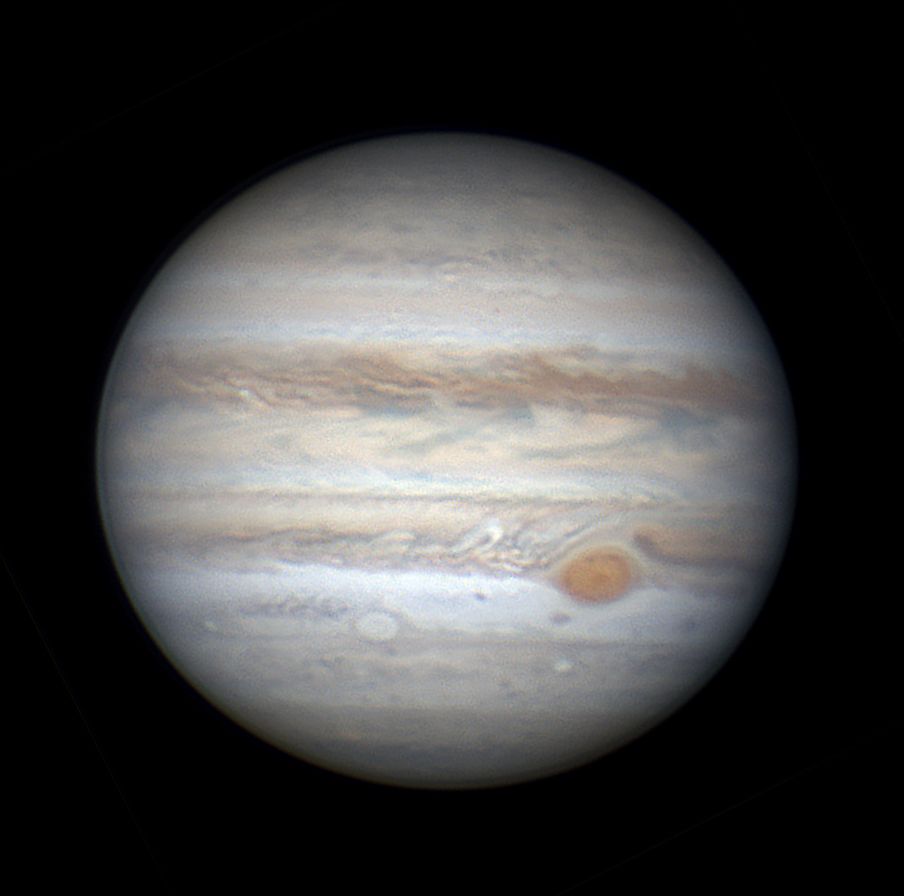 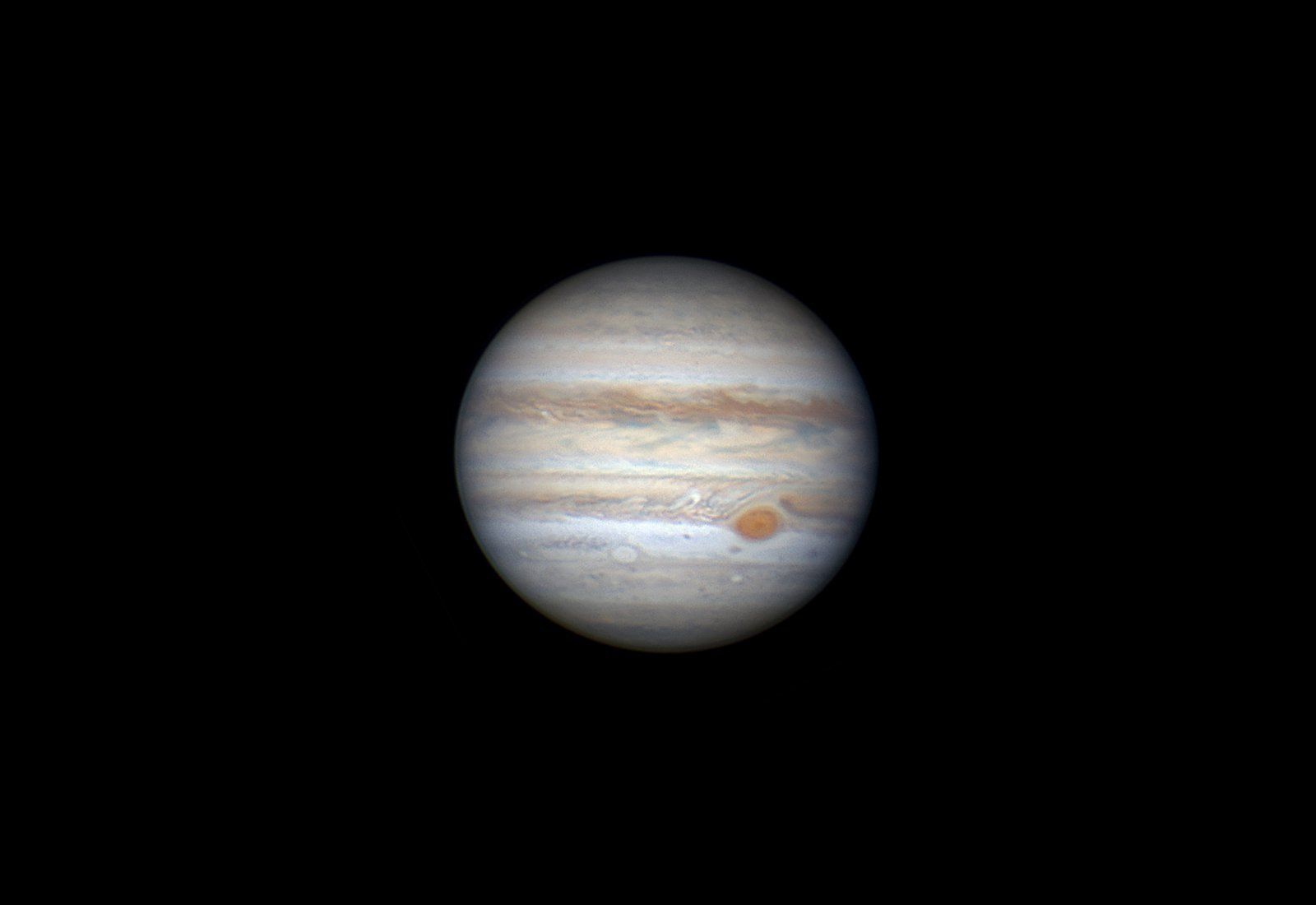 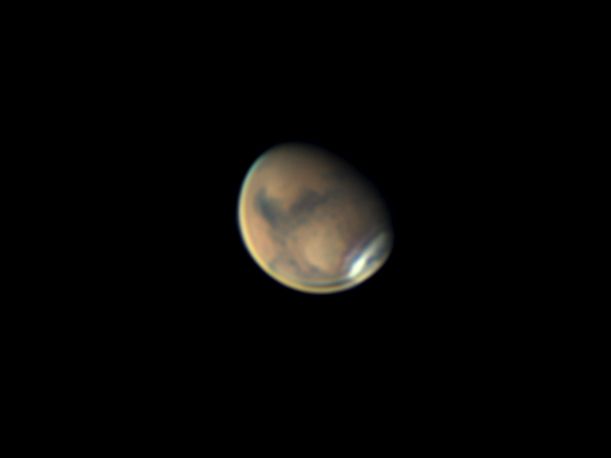 My reprocess. It takes careful study of details to see subtle changes here, especually due to change in scale here due to display. Interesting angle. 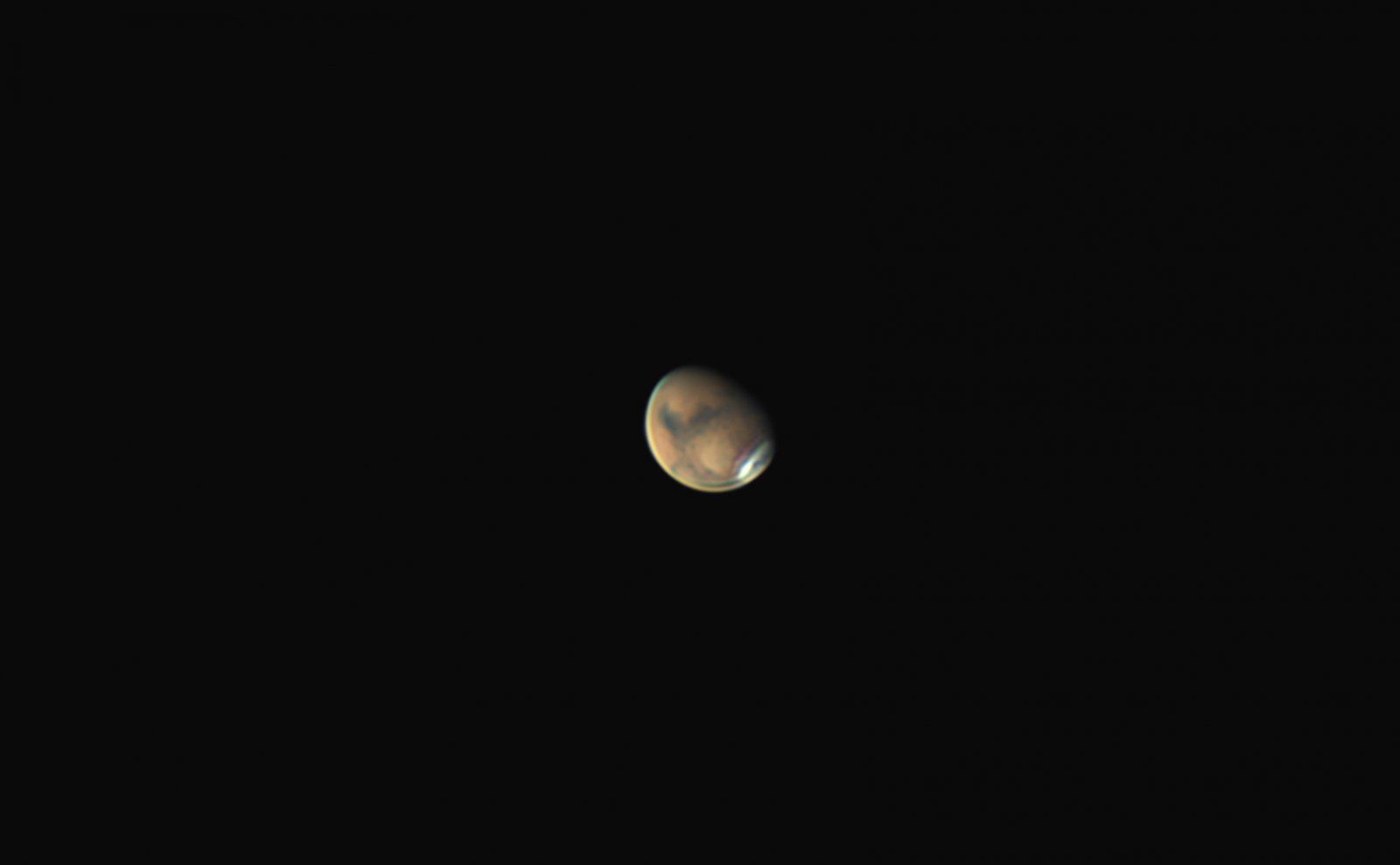 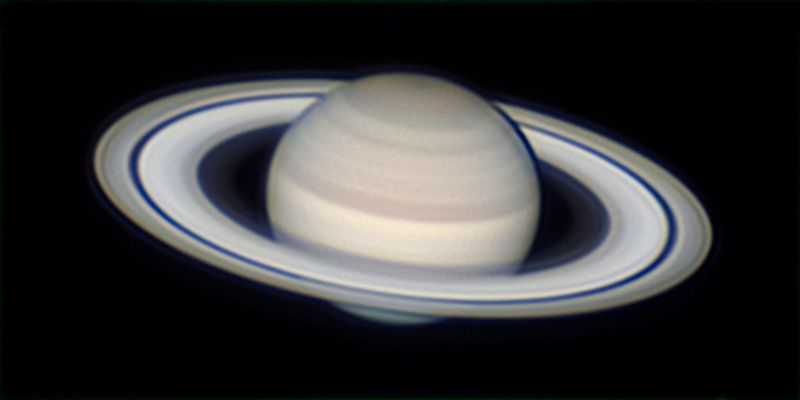 My reprocess: Though everything is enhanced here, one of the biggest and easiest things to note is the change to the rings. The entire image is bolder, but the rings have been reprocessed to make them appear much more like in real life and less flat, with the outer ring darker and the inner ring much whiter and brighter. 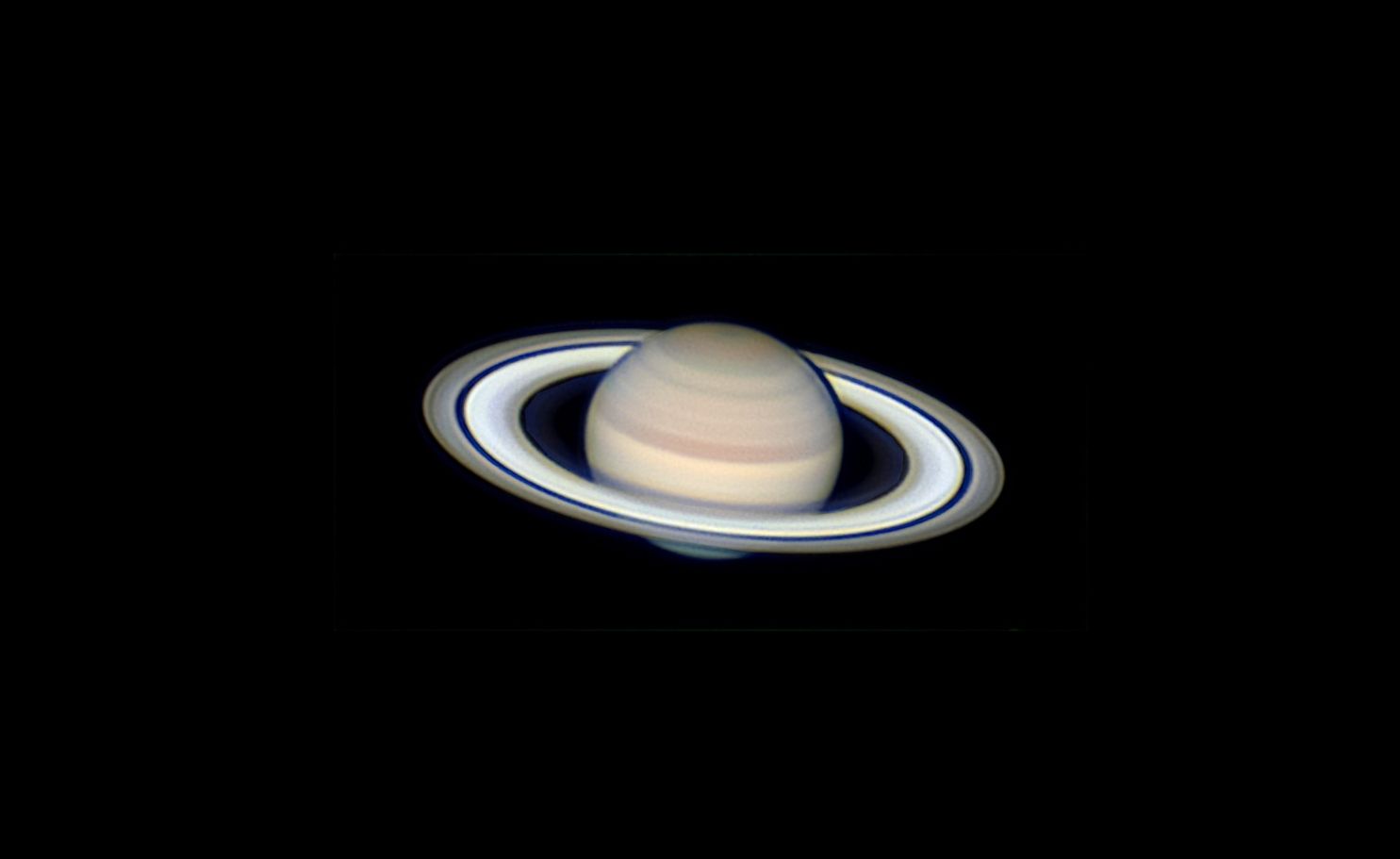 Lastly, here is a photo he took of himself looking through a scope at Lick Observatory. I reprocessed it a bit to bring out much more the stars and Milky Way outside the dome. 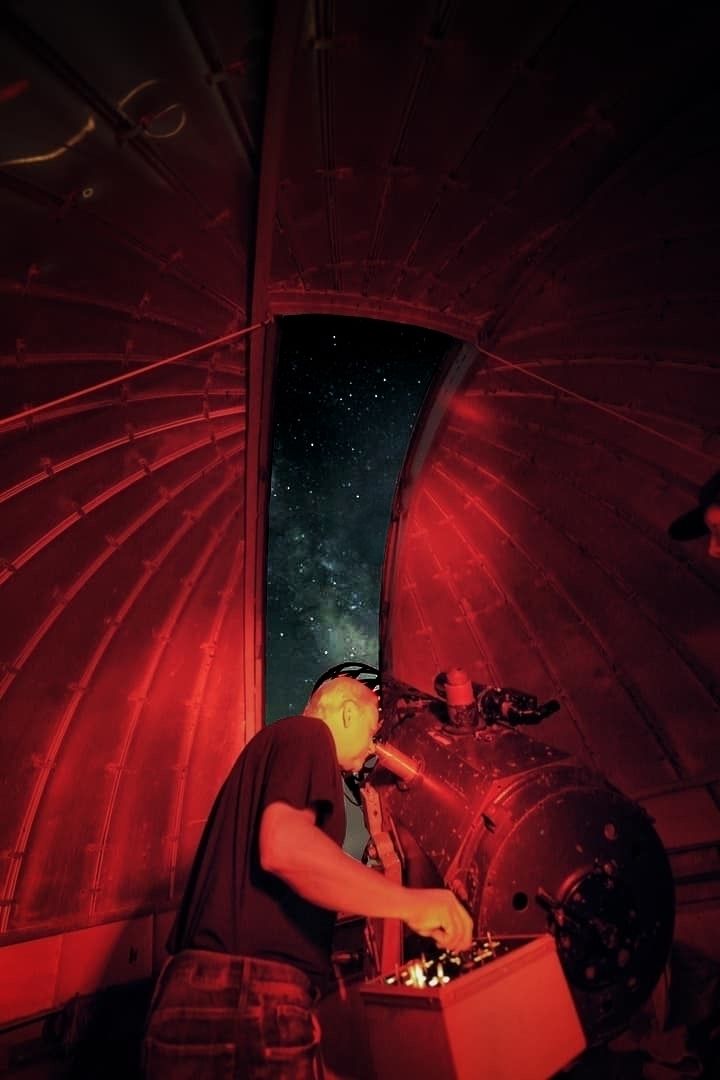 All of my young life, I was an Astronomy buff. Part of that comes from the obsession that ALL young boys had with space in the '60s. Years, later, in the late '70s, a university friend had build himself a 16" Schmidt-Cassegrain telescope he want to break in.

So, we schlepped this extremely heavy monster to the top of a local peak on a FREEZING Northern California night in the middle of nowhere (apparently freezing temps equals good 'seeing'). After hours of setting up with numb fingers and toes, he affixed his telescope on Jupiter.

I had to admit, they were the best views I'd ever seen through a telescope. Much better than my crappy Sears Wish Book Catalog telescope I had received as a boy.

But then, it struck me, photos from the Voyager spacecrafts were all over the news about then. I could, for a very modest price, view the same pictures (better actually) in the comfort of a hot tub, drinking a nice wine and listening to the soundtrack of '2001, A Space Odyssey'.

I have never been interested in owning a telescope since then.

I love looking at any pics of space, but the other day I got to wondering, why does all the world spend so much of it's money on it? I mean, exactly what benefits has it brought to the human condition? 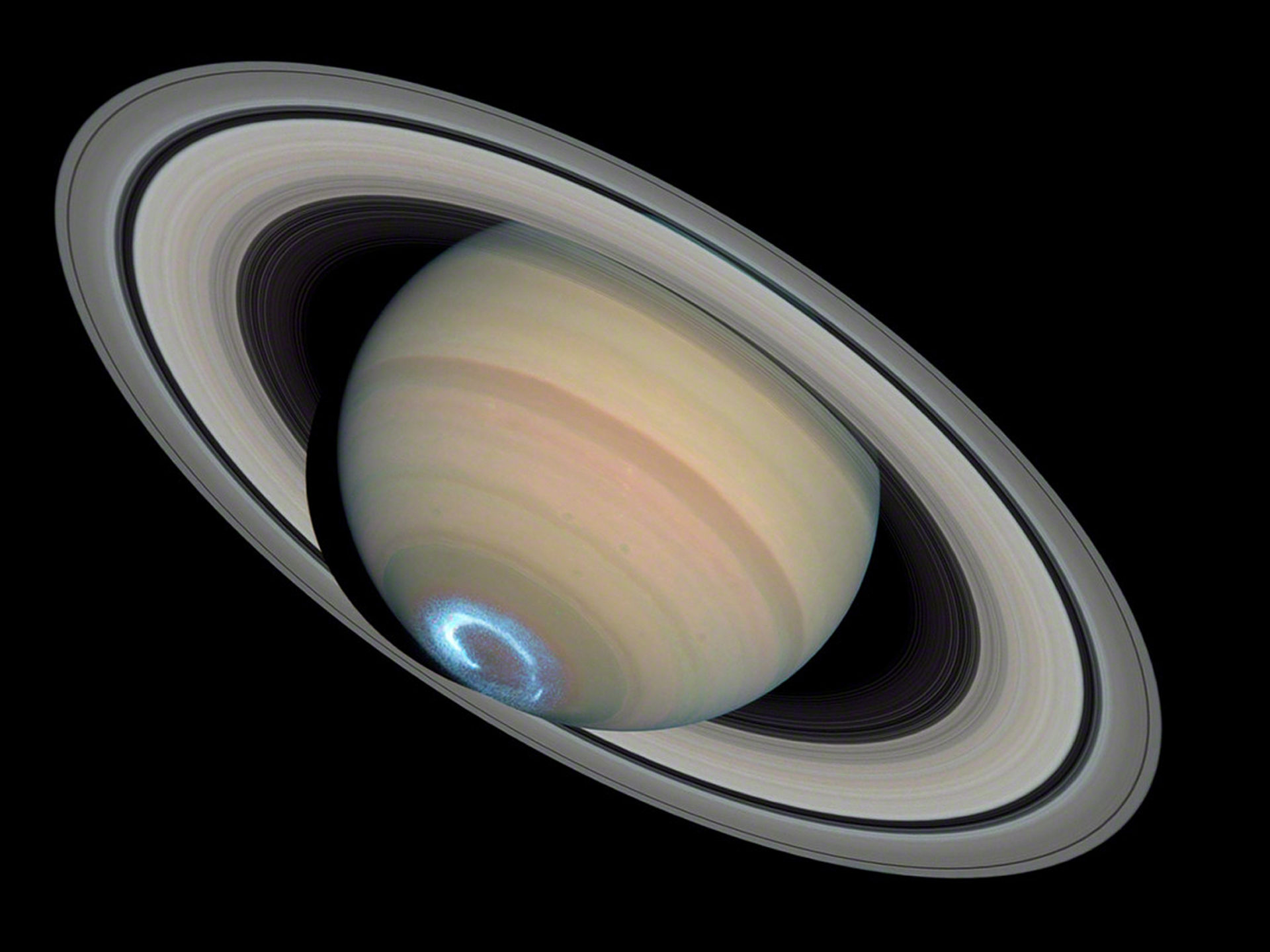 NoVote said:
I love looking at any pics of space, but the other day I got to wondering, why does all the world spend so much of it's money on it? I mean, exactly what benefits has it brought to the human condition?
Click to expand...

Probably most of the technology you're using right now today to live stemmed as an outgrowth from the space program or has been impacted by it, from medicine to communication, not to mention knowledge gained in how the sun, earth, universe and us came about, helping us understand where we are going and why. Without space research, there would be no cellphones, no GPS, no satellites in orbit, nothing, not to mention exploration for resources, other places to live someday, study of the earth itself, our climate and geology, and early detection and hopeful prevention of the next big asteroid impactor that could save the survival of the human race. Just off the top of my head for starters.
You must log in or register to reply here.

I down loaded a program called HedgeCam 2 to my android

Did You Know Biden Claims To Be Catholic?
2

If we can’t validate the election results for 20 years. Does trump remain?

No to stimulus 5. Paying people to not work and to bail out bad local governments and unions is wrong
3 4 5

Oh boy Joe Biden really put his foot in his mouth this time. Must see!
2 3 4