Noam Chomsky: Ukraine War is the Fault of NATO Aggression

excalibur said:
We, the EU, and the USA plotted the overthrow of the duly and democratically elected President of Ukraine back in 2014. It was to maintain Ukraine as the favored money-laundering center for the West.

The following video, 'Ukraine on Fire' is also on Youtube. It has upset some people, so they placed a bullshit warning label! But the video can still be viewed there as well.

Stop with the "democratically elected" bullshit. It was the Maiden coup, fomented by the US and run by Ukrainian Neo Nazis. 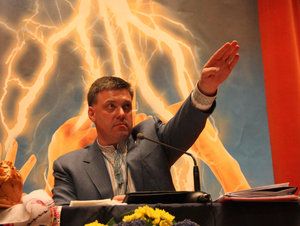 Oleh Tyahnybok, leader of Svoboda. Once said: "[You are the ones] that the Moscow-Jewish mafia ruling Ukraine fears most" and "They were not afraid and we should not be afraid. They took their automatic guns on their necks and went into the woods, and fought against the Muscovites, Germans, Jews and other scum who wanted to take away our Ukrainian state." US Under Secretary Of State Victoria Nuland Was Recently In New Delhi: Here's What Is Said Of Her Role In 'Regime Change' In Ukraine​

"Many experts believe that Victoria Nuland was the “mastermind” behind the 22 February 2014 “regime change” in Ukraine, aimed at overthrowing the democratically elected government of President Viktor Yanukovych, who was opposed to the assimilation of Ukraine by the European Union and NATO (North Atlantic Treaty Organisation).

In her leaked telephone conversation with Ambassador Pyatt, Nuland revealed her wish for Oleh Tyahnybok (one opposition leader) to work with the new regime in Ukraine.

According to this report, Oleh Tyahnybok, the presidential candidate of the far right Svoboda Party in 2014, is an open "Nazi-sympathizer". His party, which was at the centre of the "regime change" protests, espouses an ultra-nationalist, anti-Russian agenda, and its critics say that the Svoboda Party is an anti-Semitic, neo-Nazi organization." 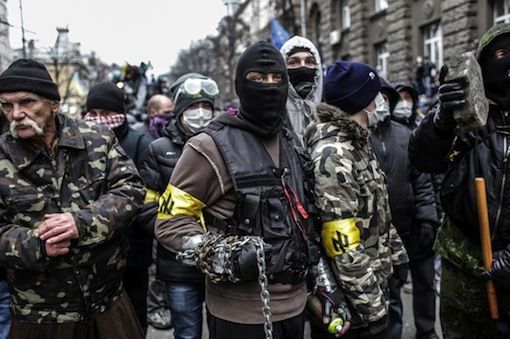 munkle said:
Stop with the "democratically elected" bullshit. It was the Maiden coup, fomented by the US and run by Ukrainian Neo Nazis.
Click to expand...

That is what I said. We and the EU overthrew the democratically elected President of Ukraine.
"Every record has been destroyed or falsified, every book rewritten, every picture has been repainted, every statue and street building has been renamed, every date has been altered. And the process is continuing day by day and minute by minute. History has stopped. Nothing exists except an endless present in which the Party is always right." ~ George Orwell's '1984'

fncceo said:
You have to feel sympathy for poor, old, Chomsky.

He made his living for decades by idolizing The Soviet Union, global Communism, and tearing down the country of his birth, America.

When The Soviet Union fell apart and embraced capitalism, he was devastated. He tried latching onto the Palestinian cause, but no one ever really took him seriously on that.

His life-long connection with his meal ticket, Russia, can't let him throw them completely under the bus. But, war in The Ukraine puts him in a difficult position.

Now, he's come up with a way to sell his old product, anti-Americanism, with a new label. "It's not Russia's fault they invaded The Ukraine, it's America's fault!".

Well, good luck Comrade Chomsky. I don't think this will sell as well as Che T-Shirts, but you might be able a sell a couple of books before you leave this world.
Click to expand...

How is being anti-Ukraine, anti-American?
Epstein Didn't Kill Himself

munkle said:
How is being anti-Ukraine, anti-American?
Click to expand...

I couldn't give a fetid dingo's kidney about The Ukraine, or Russia, or any other place I don't live.

I couldn't give a fetid dingo's kidney about The Ukraine, or Russia, or any other place I don't live.

OK. Just curious why the picture of Moshe Dayan?
Epstein Didn't Kill Himself

Typical leftist idiocy.
"Principle is OK up to a certain point, but principle doesn't do any good if you lose."
Dick Cheney

Location
Now a resident of a Red state! Hallelujah!

Noam Chomsky comes to his preconceived belief and it surprises nobody familiar with that dipshit’s work.
Just because I share use of the brain doesn’t mean I have obtained Unobtainium Status — yet. #StopBrandoN

It’s amazing how one person - Chomsky - can be so wrong so often
“the termination of all rules, regulations and articles, even those found in the Constitution.” - Orange Jumpsuit Jesus

“the termination of all rules, regulations and articles, even those found in the Constitution.” - Orange Jumpsuit Jesus

Toro said:
It’s amazing how one person - Chomsky - can be so wrong so often
Click to expand...

I don't know we currently have a president with a worse record on being correct.
You must log in or register to reply here.

Evidence That Russiagate was a Fraud.

Zelensky says Ukraine prepared to discuss NATO neutrality, all those people died for nothing

Chomsky: When Clinton Moved NATO Missiles Right Up to the Russian Border After Promising Not to, After Fall of Berlin Wall
2

Racists Are, Once Again, Trying To Overthrow A Legitimate Election

D
Was Ukraine a threat to Russia before start of Russian military operation?
18 19 20