Most of the illegals will never assimilate

Rigby5 said:
I am not sure, but it seems to me that the success of the US is from immigrants.
Seems to me that the reason we are doing badly now is not enough immigration, so can't compete with the volume and low cost of labor in China?
Click to expand...

Of course not now, if you are suggesting we use invaders as slaves the way slave labor is used in China, I might agree with you. The slaves don't live long so we would need a constant influx of invaders.
Joe and the Ho gotta Go
A storm is coming
Voting is violence

There are good and bad in all walks of life and I can take you to the Appalachians of Kentucky to show you life there and I am sure you would think a bunch of illegals live there…
Click to expand...

We do not need more illegals/refugees/migrants/asylum seekers ect

Otherwise they are not needed or wanted
Psalm 14:1 The fool says in his heart, "There is no God."
OP

Whole damn nation is flooded with the “brown poop

You're an ignorant fool.

Rigby5 said:
I am not sure, but it seems to me that the success of the US is from immigrants.
Seems to me that the reason we are doing badly now is not enough immigration, so can't compete with the volume and low cost of labor in China?
Click to expand...

You make a most valid point, indirectly. Your assessment would require breaking it down into legal versus illegal process. The distinction also requires looking at the vast numbers going through the legal route with average wait time at least 18 months or much longer. Many foreign students who graduate from US top universities have to leave the US after their studies are completed due to visa terms. Many of these graduates are trained specialists in medical and scientific areas, and want to come back to the United States but must wait to do so. A numbers game, if you will, among large numbers of competing applicants. Many scientists and researchers from outside the US included in this large group, multiple countries, multiple ethnicities. Illegal entrants cut in line.

Distinguishing between positive and negative intent for each individual or family: we must look at the reasons for wanting to reside in the US.

The illegal traffic (surely you know this) involves numbers of drug runners daily feeding into high crime areas infested with turf wars, by the hour- daily shootings and deaths of innocent bystanders as well as (much worse imo)human traffickers who avoid the checkpoints deliberately of course.

Certainly a real mess at the southern border due to a large subset of illegal entries specifically coming here (many coyotes in and out, caught/released, over and over-google it) are here to commit crimes.

Please do not assume that I am stating all illegals are doing the same, the majority of families are often desperate and not planning to commit crimes but, let’s hear from people who live along the southern border and what happens when they leave their houses, let’s talk about that to look at actual outcomes. There are taped interviews you can easily see for yourself online, border towns where residents claim that when they leave their residence they come back to find their house has been ransacked and things missing.

When illegal and legal entry have no distinction (I can almost read that from your post but correct me if I’m wrong but I think that’s where you’re coming from), it will be a field day here in the states, and it will be a very different type of America.

What options do people have after using port entries to sneak into the country? Btw- the words “sneak in” used deliberately here, otherwise, why would a person choose to travel inside a large crate if they are not sneaking into the country? That assistance requires underground help of some sort because embezzlers of humans couldn’t really care less after they get their money.
Last edited: Sep 28, 2022
Focus on the big picture in all things political
F

Quasar44 said:
They are filthy dirty sewer Rats and you morons are easy targets
. Most in the turd world are lazy swine
Click to expand...

Unkotare said:
You're an ignorant fool.
Click to expand...

Personal insults are not allowed

Quasar44 said:
Vast majority will never be educated or work
. They only come here to steal and loot !!!
Many of them are being expelled from their own garbage nations
Click to expand...

You know all of this how?

Dont Taz Me Bro said:
You know all of this how?
Click to expand...

Quasar44 said:
They are filthy dirty sewer Rats and you morons are easy targets
. Most in the turd world are lazy swine
Click to expand...

We Won't Live Free Until the Democrats, and Their Voters, Live in Fear
OP

Dont Taz Me Bro said:
You know all of this how?
Click to expand...

Why cant I be promoted to Diamond member ???
OP

I dont have much more to say lol
OP

Rigby5 said:
Wrong.
Illegals can not earn untaxed wages in the US.
If they are using a fake SS, then the government keeps all of the money with held from paychecks.
If they were citizens, it would all be returned to them due to their low level of income.
Click to expand...

LMFOAO
The Individual Taxpayer Identification Number (ITIN) is a tax-processing number issued by the Internal Revenue Service (IRS) to ensure that people—including undocumented immigrants—pay taxes even if they do not have a Social Security number (SSN) and regardless of their immigration status.

Undocumented immigrants are legally obligated to file U.S. tax returns and pay taxes, even when they're paid “under the table” in cash. Many do so because they intend to apply for U.S. citizenship at some point.

Q: Does the IRS pay billions in tax refunds to workers who are in the U.S. illegally? A: Yes.
OP 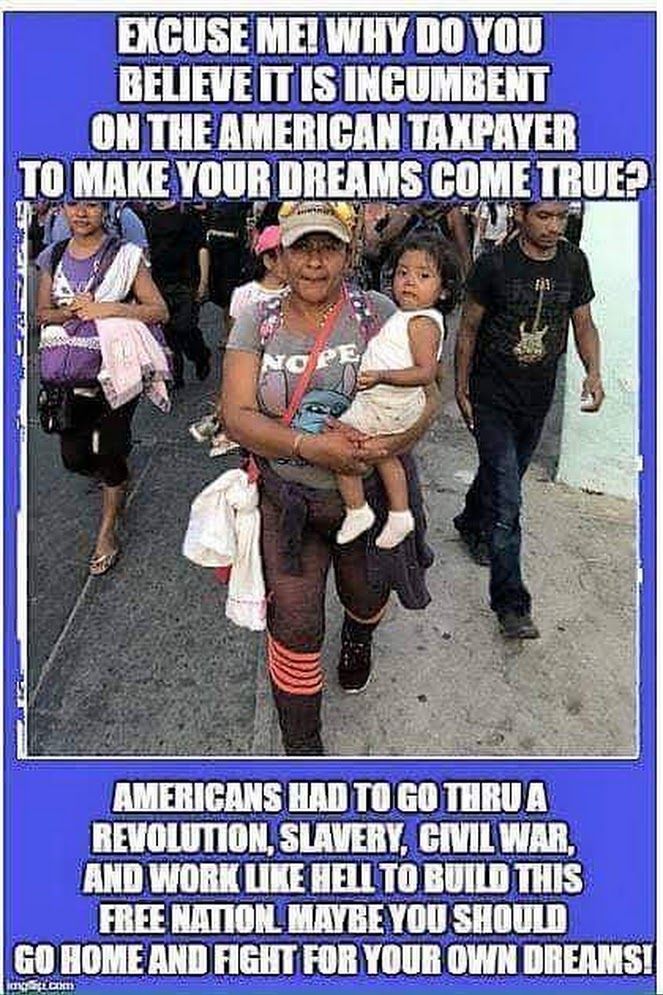 rightwinger said:
It wasn’t illegals who attacked our Capitol

Only because democrats deserved it.
Joe and the Ho gotta Go
A storm is coming
Voting is violence

EvilCat Breath said:
Only because democrats deserved it.
Click to expand...

Taxes are the price we pay to live in a civilized society…….Oliver Wendell Holmes

Quasar44 said:
Vast majority will never be educated or work
. They only come here to steal and loot !!!
Many of them are being expelled from their own garbage nations
Click to expand...

So you are saying they act like some Americans.
To live is to suffer~Fritz Lang-Film Director

Do asylum seekers from Venezuela fly to Mexico and then enter Texas?

NYC Mayor wants half of a $billion$ for illegal aliens

How do you really feel about the illegal migrants?
2 3 4

How many illegals will come before even the leftists become concerned?
2