A constitutional carry state that bans abortion on demand and Fake Jake...I mean... Golfing Gator hates on that state...but I'll bet his state...pro-abortion, anti-gun Illinois is the greatest state in the Union...

Not good for the image.

Illinois sucks too, but for different reasons.

Missouri is backwards for a lot of reason, this law being one of them by denying exceptions for rape, incest or human trafficking and making the line for the "mother's health" so high that it is meaningless.

They also have backwards marijuana laws.

Plus they elected Josh Hawley, what more does anyone need to know about the state?

My county here in Illinois is a "sanctuary county" against overreaching gun laws both state and Federal. It was a ballot initiative a few years back that I helped get passed by getting signatures to get it on the ballot and then doing door knocking to spread the word about it.
“A conspiracy theorist is a person who tacitly admits that they have insufficient data to prove their points.
— Neil deGrasse Tyson
A

Welcome to never getting a BJ again Mo. assholes, so you think you can improve things. Ha, Ha, Ha, Ha ! Every one of you are gonna be devorced within 3 years. Look for a wild chice. but you so fucked !
Last edited: Jun 26, 2022

App'z said:
Welcome to never getting a BJ again Mo. assholes, so you think you can improve things. Ha, Ha, Ha, Ha ! Every one of you are gonna be devorced within 3 years. Look for a wild chice. but you so fucked !
Click to expand... 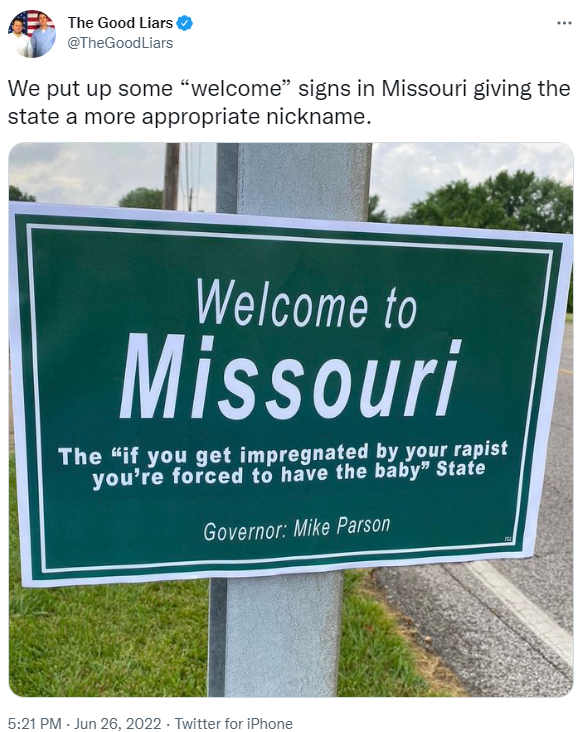 Do you know what I did when Minneapolis went to hell? I moved. Duh!
"Biden is not in command".
David Axelrod
B

You see...we were also the first state where no abortions were performed... 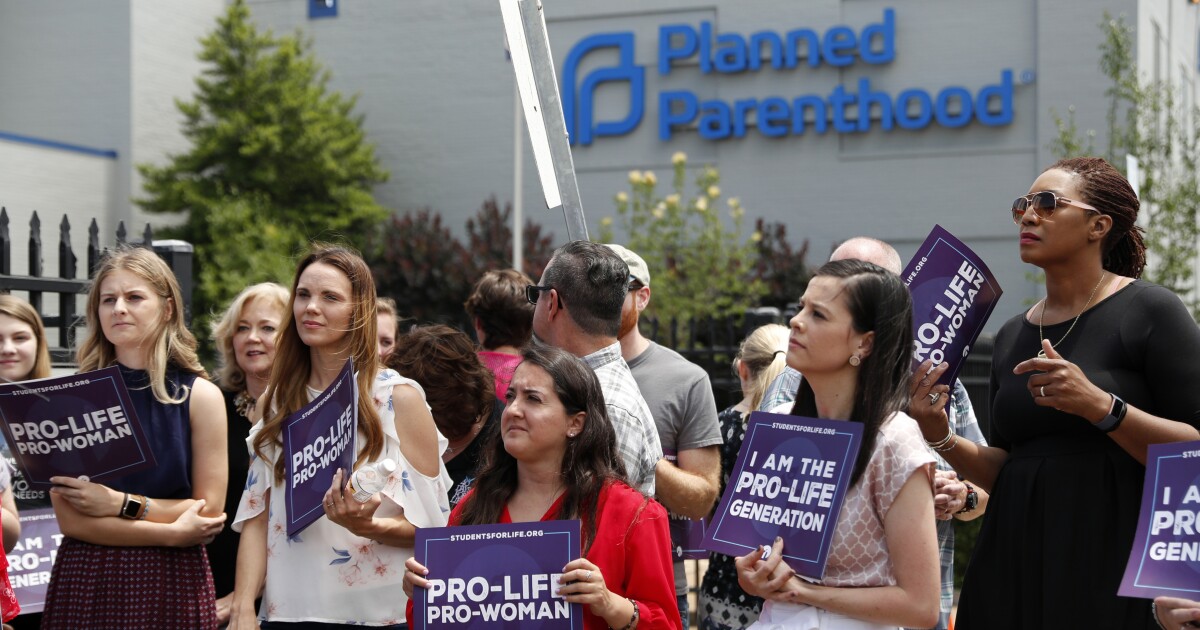 Missouri becomes first state in US to no longer perform abortions

Missouri has become the first state in the U.S. where abortions are no longer performed.

Stann said:
That's just it. There are many reasons for having an abortion, and they occur throughout the pregnancy. The other day they talked about a woman who was married had a daughter with her husband and we're expecting another daughter. They told the little girl she would have a sister. They were preparing the nursery. But on our 20th week checkup they got some horrible news. The fetus suffered from non-viable genetic disorder. The best choice of action was immediate abortion. Are you going to sit and judge her say she can't have an abortion? That's the whole problem in a nutshell. This decision is between a woman and her doctor. No state, no court should be involved in this process it's as simple as that.
Click to expand...

Yes, that's why Missouri's boasting will be short-lived: exposing the lack of SCOTUS medical education, a SCOTUS that also lacks theocratic restraint precisely due to a Catholic puppet now in the White House. As the records accumulate, inborn errors of development will go to show that this current SCOTUS is not the only horse's-rear-end SCOTUS that has mouthed off.
Click to expand...

These new genetic combinations that accompany pregnancy have caveats SCOTUS will be unable to predicate via arrogant blanket laws.


https://www.embopress.org/doi/epdf/10.15252/embr.202255512
'....The list of conditions at mid-pregnancy scan that the ultrasound technician looks for is alarmingly long. The major problem with these conditions is that many are not detectable until later in the pregnancy. The more severe ones put parents in an extremely difficult situation: where do they draw the line at how much suffering they are willing to set their child up for? In a world post-Roe vs. Wade, will future parents have the rights to make a decision to abort?
....
in males, also paternal risks....increased de novo mutations.'

This ultraconservative majority, a majority that arrogantly denies a religious agenda, will not stop here. They will work, as Justice Thomas threatens in his concurrence, 'At the earliest opportunity' to impose their religious beliefs on us all by next eliminating the right to contraception.

SCOTUS is glaringly incorrect here, and shows its lack of education clouded by a collective ego like a hippopotamus running around in the living room:

'Our opinion is not based on any view about if and when prenatal life is entitled to any of the rights enjoyed after birth. The dissent, by contrast, would impose on the people a particular theory about when the rights of personhood begin.'

This imposition of dissent is precisely what's called for, since previous SCOTUS psychopathology sought to define when life and identity began, which was a fundamental and lethal mistake of jurisprudential overconfidence.

In other words, the 'rights of personhood' never end to have to begin, as SCOTUS would have us believe.
A

Killing kids in the Wombs far out number the Psycho kids shooting kids in Schools or psycho killers ! World wide the count for 2021 is over 40,000,000 abortions. Thas a real Sadistic killer in action there !

Perverts and degenerates will find something else for their pleasure 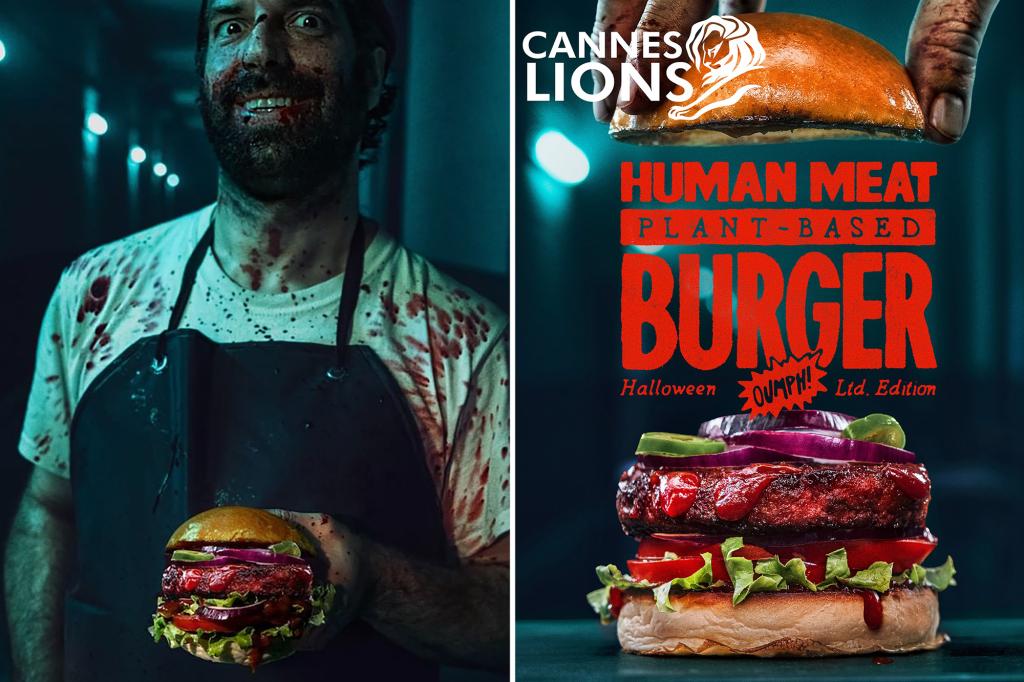 If you’ve ever had the desire to taste human flesh, you’ve now got a chance to give it a whirl between a bun.

nypost.com
"Capitalism is an exceptional belief that the activities of the most vile scum, driven by the most base motives, will somehow be for the benefit of everyone" (c) John Maynard Keynes

Missourian said:
Missouri became the first in what is expected to be a wave of states to effectively outlaw abortion in the wake of the Supreme Court’s landmark ruling Friday morning overturning Roe v. Wade.

Well they showed the demoscats, didn't they? I'd only approve of abortion in rape incest or mothers health issues. These butchering ghouls need to stop.

Stann said:
Were you even alive prior to 1973. It was a nightmare for women, they were treated as property and second class citizens. The reason ,Roe versus Wade came into being was because states were passing egregious abortion laws and it was creating way more problems than it was solving. If it's solved anything. Today we are passing even more egregious laws in States like Texas and Oklahoma I've already heard horror stories. And we're going to have to relive all those whores again because a minority of Americans believe that there are unborn children in this world, there never were. It's an emotional ploy to drag you into that emotional thinking on abortion. No one wants abortion, it's simply is necessary component of this world.
Click to expand...

I was alive then and you are a liar.
You must log in or register to reply here.

Have gun will travel. States to export both their gun laws and their abortion laws.
3 4 5

The fight for abortion rights turns to state constitutions
2 3

A moment ago
bluzman61
B
B
Oh My! Jill Has COVID
2