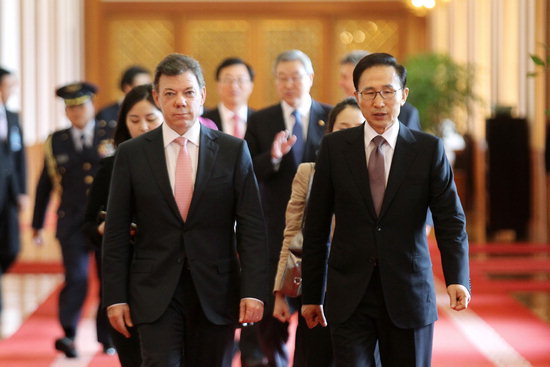 The two leaders agreed to elevate their relations to a "strategic cooperative partnership" and set up regular mechanisms such as high-level conferences, business meetings and forums for collaboration.

They also agreed to sign a free trade agreement by the end of this year.

Two-way trade between Korea and Colombia nearly doubled in 2010 to US$1.8 billion while Korean exports to the Latin American country were worth nearly $1.4 billion the same year.

The two leaders also presided over the signing of a series of memorandums of understanding calling for a policy consultation forum, joint development of energy resources, infrastructure construction, and green growth. This is the third visit by a Colombian president to Korea since the establishment of diplomatic relations in 1962.
You must log in or register to reply here.

Rain is always blessing OTHERS but problems for KARACHI people?

Defying U.S., China and Iran Near Trade and Military Partnership

Trump, bringing peace to the world, in particular between muslim majority countries and Israel. But, didn't they lie about him and muslims?

Do you repaint your house ???

China: The more you tighten your grip, the more people slip through your fingers
2

2 minutes ago
badger2
B