Iraq's grand Mufti: Maliki is acting upon the directions of Quds force and the IRGC

Iraq's grand Mufti, Sheik Abdolmalik Al-Saadi reiterated that Maliki's government is built on sectarianism. He said this illustrates the gravity of Iran's involvement in Iraq. Maliki is acting on the directions of the Quds force and Iran's Revolutionary Guards Corp and Iran's ambassador to Iraq. He accentuated that the current Iraqi government is pursuing Iran's interests in Iraq better than if there was a direct invasion by the Iranians
W

Iraq: How much is the divisive approach of Maliki responsible for the turmoil?
15 Jun 2014: Jason Burke: Nouri al-Maliki has turned himself into a strongman but this may have created fertile ground for insurgents linked to Syria to extend their military grip

In the centre of the city, a 63-year-old man divides his time between a windowless office and a heavily guarded villa, shuttling between the two in a black armoured SUV. Here, in the walled-off green zone, the noise of traffic in the battered capital beyond the security perimeter is barely audible. Nouri Mohammed Hasan al-Maliki has spent decades trying to change the power dynamics of his country. In recent years, he has achieved some long-term aims. This weekend, for the underground activist turned party official turned two-term prime minister of one of the most volatile countries in the world, his failures are more evident.

For there is fear in Baghdad, where Maliki has been based since returning from a 23-year exile in 2003 in the wake of the US invasion, as there is across much of Iraq. The sudden seizure of Mosul, the second biggest city, by several hundred militants from the Islamic State in Iraq and the Levant (Isis) on Tuesday now looks like the start of a campaign, not its end. On Wednesday, the Isis extremists tookcontrol of Tikrit, a provincial capital an hour's drive north of Baghdad. By Friday, there was talk of an Isis push to the edge of the capital itself. 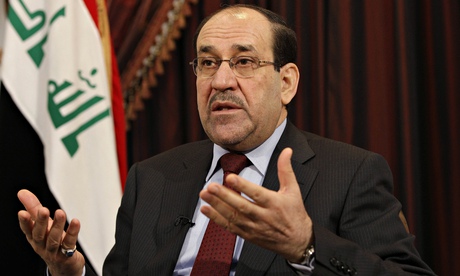 As the United Nations Security Council met to discuss the sudden crisis, Maliki, as dour and impassive as ever, restricted himself to a short public statement blaming the collapse on a "conspiracy" whose participants would be severely punished. He failed to achieve a quorum in parliament needed to impose a state of emergency or the numbers to ask the US for air strikes and drone attacks against the advancing extremists. Few can remember Maliki ever smiling. This weekend, he has less reason than ever.

The question now is whether this sudden unravelling is Maliki's own fault? Or was it always inevitable? Maliki's story, like that of many Iraqis, is woven through the country's violent history. He was born in 1950 near Hilla, in the southern Shia-dominated heartlands of Iraq. The town is close to Kerbala, one of the most holy cities for the 15% of Muslims worldwide and 60% to 65% of Iraqis who follow that minority branch of the faith.

Shia militia: 'Isis will not take Baghdad'
14 Jun 2014: The militiamen in the capital have drawn a clear line in the sand and say that they will stand firm

After five days of siege and foreboding, the citizens of Baghdad breathed easier on Saturday. Old-world tea houses were once again brimming. So were new militia recruitment centres, where would-be fighters signed up to defend the capital. The city's collective relief stemmed from three live television addresses, only one of them made by an Iraqi. On Friday, President Barack Obama said enough to convince most that he would soon send US jets to deal with the insurgents at the gates. Hours later the Iranian president, Hassan Rouhani, said an alarmed Iran, which is overwhelmingly Shia, would send whatever it took to stem the insurgent Sunni tide. The alliance of common interests was perceived as a rebuff to Isis (the Islamic State in Iraq and the Levant), a jihadist group so hardline it was disowned by al-Qaida. Isis has been rampaging through the country, pledging to rewrite the region's borders.

But it was a religious cleric who succeeded in steeling Iraqis for a fightback. The call to arms by the highest Shia authority in the land, Ayatollah Ali al-Sistani, mobilised in less than one day around a division of militia men who, unlike the military, will not run from a fight with the insurgents. Help is clearly on the way. And it could not come soon enough for many. "I heard the US president speak and his words seemed reasonable," said tribal leader Sheikh Abu Wissam al-Saade at a recruitment centre in the eastern suburb of Karrada, as three new volunteers arrived wanting to fight. "I would say one thing, though, he is partly to blame for this mess. He's been refusing to send us fighter jets for the past six years, because [Kurdish leader Massoud] Barzani has warned him not to." One scrawny recruit signing on with his brother said: "I have come to fight for the sake of my country. This place has been through a lot." 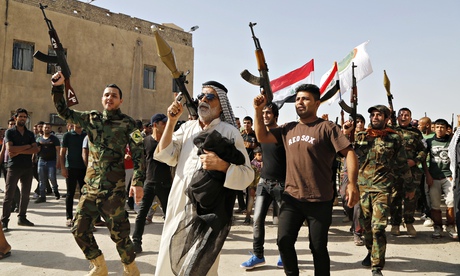 Volunteers, who have joined the fight against predominantly Sunni militants, carry weapons during a parade in the streets in Baghdad's Sadr city.

Karrada wears the scars of insurgency more than most places in Baghdad, with up to five bombs a month shattering its glitzy shopfronts since US forces withdrew. Ground zero of the current threat, however, is around 60 miles to the north. Here, and in the city's vulnerable western approaches, the new volunteers are already preparing to confront Isis. Iraq's immediate future seems sure to be determined by non-state actors and powerful foreign patrons. So much for the state, which has done little more than reel in horror ever since the fall of its three largest cities to a small insurgent force in less than one week. "With the scale of this crisis, all of the military units and the militia groups have melted into each other," said al-Saade. "The fighting force against Da'ash [Isis] has become a common entity."

Those in the provinces contacted by the Observer revealed that they had already dispatched upwards of 15,000 men &#8211; most without training &#8211; to Baghdad or beyond. Dhi Qaa Yehya Mohammed Bakr said his province had already sent 2,500 fighters to Baghdad, while 25,000 have signed up around the province. Columns of minibuses, some escorted by police trucks, snaked along almost empty highways from the south all day on Saturday. Signs of Shia fervour once again blending with militancy were commonplace in Baghdad . Military trucks carrying tonnes of ammunition pulled out of bases waving flags depicting the revered Shia martyrs, Hussein and Abbas. There was no sign of the Iraqi banners that were only a week earlier a far more frequent sight.

Bombings and shootings kill 15 in Iraq

Scores killed in Iraq bloodshed ahead of Shi'ite holy day

An alert we are not getting from experts.

Why was this thread closed? No explanation and it seemed truthful with link

Gone are pre-existing conditions if you vote for trump, and I know some trumpers are counting on the ACA
10 11 12