In A Somber Homecoming, Yazidis Grieve And Watch Over Their Dead

All these people wanted to do was live in peace. They weren't bothering anyone. 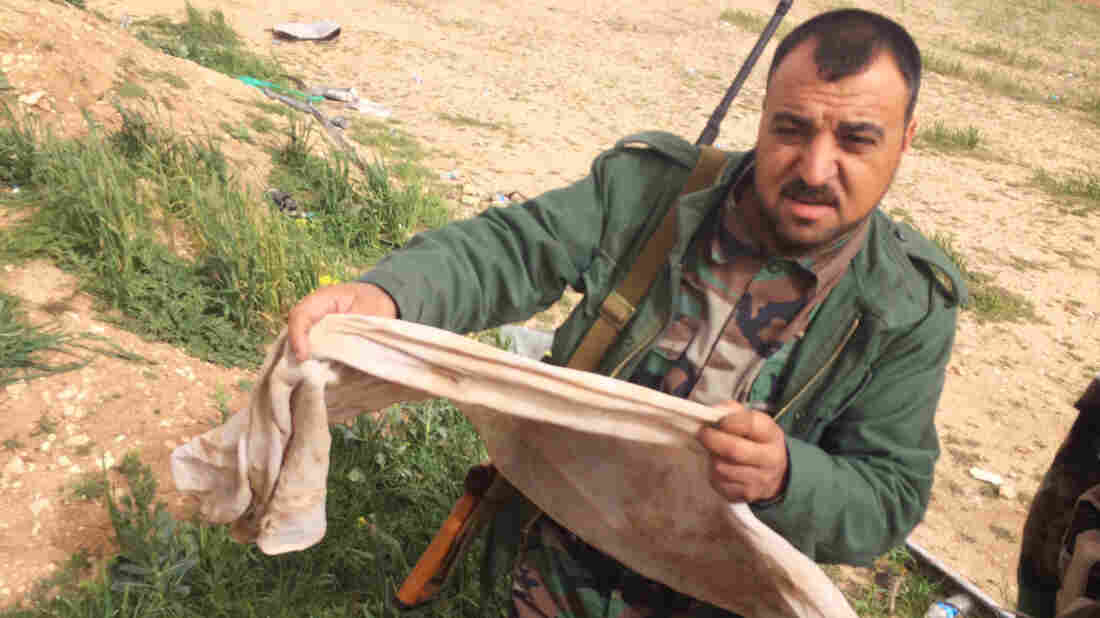 In August, the self-proclaimed Islamic State seized territory near the northern Iraqi village of Hardan. A handful of Yazidis who fled have returned to a grim discovery: mass burial pits. Naif Brahem Khadir holds a traditional man's headdress with blood stains and a bullet hole. It was half-buried in a mound near the village. He believes his uncle and his cousin are among the bodies here.

Ari Shapiro/NPR
As you drive through northern Iraq near the border with Syria, you pass checkpoints every few miles or so. Manning these roadblocks are Kurdish fighters, wearing camouflage and body armor, carrying big guns.

Sometimes there are piles of dirt in the road to slow down traffic.

In A Somber Homecoming Yazidis Grieve And Watch Over Their Dead Parallels NPR?
I

Amal Clooney ‘Ashamed’ of the U.N. on ISIS Targeting Yazidis: ‘States Are Failing to Prevent or Even Punish Genocide’
September 19, 2016 – World-renowned lawyer and human rights advocate Amal Clooney spoke before the United Nations last week, saying that she is “ashamed” as a supporter of the U.N., as a lawyer, and as a human being of the inaction that she is seeing in the face of the genocide of the Yazidis and other minorities by the Islamic State, or ISIS.

“This is the first time I have spoken in this chamber,” Clooney said. “I wish I could say I'm proud to be here but I am not. I am ashamed as a supporter of the United Nations that states are failing to prevent or even punish genocide because they find that their own interests get in the way.” Clooney spoke at the U.N. chambers in New York City to introduce her client Nadia Murad, a young Yazidi woman whose family was slaughtered by ISIS and who escaped sex slavery. “I am ashamed as a lawyer that there is no justice being done and barely a complaint being made about it,” she said. “I am ashamed as a woman that girls like Nadia could have their bodies sold and used as battlefields.” “I am ashamed as a human being that we ignore their cries for help,” Clooney emphasized. “We know that what we have before us is genocide, and we know that it is still ongoing. We know exactly who the perpetrators are. They brag. ISIS brags about its crimes online.”

“There is no one more blameless than the young Yazidi girl who has lost everything and who today comes before you and asks for your help,” Clooney said. “Yet two years on, two years after the genocide began, 3,200 Yazidi women and children are still held captive by ISIS.” “Not a single member of ISIS has been prosecuted in a court anywhere in the world for crimes committed against the Yazidi,” she said. “I am proud to know you Nadia, and I am sorry that we have failed you,” Clooney concluded. “I hope that your appointment today can be a turning point for all victims of sexual violence and human trafficking. And to those who thought that in their acts, they could destroy you, let them know this: Nadia Murad’s spirit is not broken and her voice will not be silenced, because as of today, Nadia is the United Nations ambassador who will speak for survivors all over the world.”

Murad related her harrowing experience in testimony before Congress in July. She was taken by ISIS fighters from her village of Kocho in Northern Iraq at the age of 19 in August 2014. “I was one among the thousands of the women who were taken to Mosul,” she testified, recounting, “the first thing they did in Mosul was after distributing us to the fighters was to taking us to the court and have us convert by putting our hand on the Quran.”

Nadia Murad, a young Yazidi, testifies before the U.S. Congress about ISIS's genocide against the Yazidis, Christians and other religious minorities.​
Murad said that she “was raped and sold and abused” but counts herself lucky “because girls at age of nine were raped as well.” “Only in two hours in my village more than 700 men were killed,” she said. “Among them were six of my brothers, and same day, my mother was killed too for no reason but for having a different religion.” “I know what is going on now with more than 3,000 Yazidi women, girls, and children who are still in captivity,” she emphasized in her testimony. “When I was held, for every hour that passed I was very happy and grateful for that, if I was not sold, if I was not raped, one hour was counted for me and every hour was counting for me.” “I do not enjoy the feeling of the freedom, because those who committed these crimes have not been held accountable,” she said.

Amal Clooney ‘Ashamed’ of the U.N. on ISIS Targeting Yazidis: ‘States Are Failing to Prevent or Even Punish Genocide’
Click to expand...

Saudi TV host under fire for tweeting thanks to Jews, Christians

I want to join the World Roma Federation