I have had this photo for a long time now, and some may have seen it.
We all probably are aware of what an iceberg looks like from above, but I never imagined what one looked like.....UNDER the water, the parts we can't see.
This is amazing, and kinda pretty at the same time.
But look at this awesome photograph of an entire iceberg, from the top, and it's bottom!

I used to live in a nice berg.
OP

That kleag light must have some watts ...awe heck... the lower half of the picture is a computer generated image invented in the mind of some geek with too much time on his hands. It is not real.
OP

percysunshine said:
That kleag light must have some watts ...awe heck... the lower half of the picture is a computer generated image invented in the mind of some geek with too much time on his hands. It is not real.
Click to expand...

Are you fucking kidding me??
Well crap, you just ruined my night..day...wee hours of the morn, whatever ~LoL~
I was gonna Snopes it, but I got it from a friend, and she has always sent me good true shit *sigh*
But hey, it's still a pretty neat picture tho, right??

percysunshine said:
That kleag light must have some watts ...awe heck... the lower half of the picture is a computer generated image invented in the mind of some geek with too much time on his hands. It is not real.
Click to expand...

Are you fucking kidding me??
Well crap, you just ruined my night..day...wee hours of the morn, whatever ~LoL~
I was gonna Snopes it, but I got it from a friend, and she has always sent me good true shit *sigh*
But hey, it's still a pretty neat picture tho, right??

Iceberg The Size Of Singapore Breaks From Antarctica...

Singapore-sized chunk of ice breaks away from Antarctica and is now adrift
Saturday, November 23, 2013 ~ A chunk of ice the size of the island nation of Singapore broke off of the continent of Antarctica late last month and is currently adrift at sea.

NASA satellite images taken on Oct. 28 and Nov. 13 show the before and after images of the break. A crack was first detected in the pine island glacier years ago. Gradually it deepened into a rift and now, a full detachment from the continental mass.

Scientists say the city-sized iceberg measures roughly 35 by 20 km. (22 by 12 mi.) and that it is anybodys guess whether the iceberg will stay trapped in Pine Island bay or get set adrift in the Southern Ocean.

Watch video about this story, embedded below via Slate Video:

Huge Antarctic iceberg poised to break away
Fri, 06 Jan 2017 - One of the 10 largest icebergs ever recorded is ready to break away from Antarctica, scientists say.

A long-running rift in the Larson C ice shelf grew suddenly in December and now just 20km of ice is keeping the 5,000 sq km piece from floating away. Larsen C is the most northern major ice shelf in Antarctica. Researchers based in Swansea say the loss of a piece a quarter of the size of Wales will leave the whole shelf vulnerable to future break-up. Larsen C is about 350m thick and floats on the seas at the edge of West Antarctica, holding back the flow of glaciers that feed into it. Researchers have been tracking the rift in Larsen C for many years, watching it with some trepidation after the collapse of Larsen A ice shelf in 1995 and the sudden break-up of the Larsen B shelf in 2002.

Last year, researchers from the UK's Project Midas reported that the Larsen C rift was growing fast. But in December the speed of the rift went into overdrive, growing by a further 18km in just a couple of weeks. What will become a massive iceberg now hangs on to the shelf by a thread just 20km long. "If it doesn't go in the next few months, I'll be amazed," project leader Prof Adrian Luckman, from Swansea University, told BBC News. "There hasn't been enough cloud-free Landsat images but we've managed to combine a pair of Esa Sentinel-1 radar images to notice this extension, and it's so close to calving that I think it's inevitable." Prof Luckman says the area that will break off will be about 5,000 sq km, a size he says that would put the iceberg among the top 10 biggest that have been recorded. 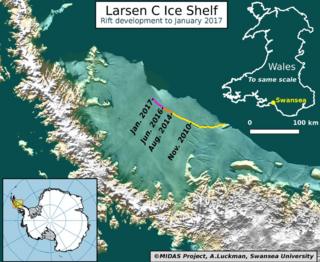 Ice shelf break up​
The researchers say that this is a geographical and not a climate event. The rift has been present for decades, they say, but it has punched through at this particular time. It is believed that climate warming has brought forward the likely separation of the iceberg but the scientists say they have no direct evidence to support this. However, they are concerned about how any break-off will impact the rest of the ice shelf, given that its neighbour, Larsen B, disintegrated spectacularly in 2002 following a similar large calving event. "We are convinced, although others are not, that the remaining ice shelf will be less stable than the present one," said Prof Luckman. "We would expect in the ensuing months to years further calving events, and maybe an eventual collapse - but it's a very hard thing to predict, and our models say it will be less stable; not that it will immediately collapse or anything like that."

As it floats on the sea, the resulting iceberg from the shelf will not raise sea levels. But if the shelf breaks up even more, it could result in glaciers that flow off the land behind it to speed up their passage towards the ocean. This non-floating ice would have an impact on sea levels. According to estimates, if all the ice that the Larsen C shelf currently holds back entered the sea, global waters would rise by 10cm. All that is very much in the future. There are few certainties right now apart from an imminent change to the outline of Antarctica's icy coast. "The eventual consequences might be the ice shelf collapsing in years to decades," said Prof Luckman, "Even the sea level contribution of this area is not on anybody's radar; it's just a big geographical event that will change the landscape there."

Granny says when it gets up here, she gonna take an icepick to it an' we gonna have chipped ice fer our lemonade...

Antarctic ice floe crack forces UK scientists to leave
January 17, 2017 - The British Antarctic Society is recalling scientists from its Halley VI polar research base in March after a fissure developed in the ice sheet.

The decision was taken after a huge crack appeared in the Brunt Ice Shelf, just 10 miles away from the Halley VI research station. "We want to do the right thing for our people,” said Captain Tim Stocking, Director of Operations at the British Antarctic Society (BAS). "Bringing them home for winter is a prudent precaution given the changes that our glaciologists have seen in the ice shelf in recent months."

NASA's DC-8 flies over the Brunt Ice Shelf in Antarctica October 26, 2010 in this handout photo provided by NASA​
There are currently 88 scientists stationed at the Halley VI research centre, which monitors climate data and played a key role in discovering the ozone hole in 1986. The station is currently undergoing a process of relocation, after a fissure - once thought to be dormant – began encroaching on the base in 2012, advancing a mile every year. But the new site is faced with another huge chasm, which developed in October 2016. Scientists from the center have been monitoring the chasm’s development but cannot be sure whether a large iceberg will "calve,’ splitting away from the main ice shelf.

According to the BAS, the risk of this happening is low and the decision to pull scientists form the research station was made as a precautionary measure. If the ice fractured during summer months, an evacuation could be swiftly mounted. But the forthcoming Antarctic winter complicates things, bringing 24-hour darkness and frozen seas, making evacuation an extremely complex process. Scientists will return to their duties at the research center once winter has passed.

Granny gonna wait till it makes it's way uppa Ohio river, den she gonna use it to put ice in her mint julep...

Massive iceberg breaks off from Greenland glacier
July 13, 2018,
An iceberg four miles wide has broken off from a glacier in eastern Greenland and scientists have captured the dramatic event on video. New York University professor David Holland, an expert in atmospheric and ocean science, told The Associated Press that "this is the largest event we've seen in over a decade in Greenland."

A June 22 video of the incident was taken by his wife, Denise Holland of NYU's Environmental Fluid Dynamics Laboratory. They had camped by the Helheim Glacier for weeks to collect data to better project sea level changes due to global warming. Holland said Wednesday that the time-lapse video, which is speeded up 20 times, shows "3 percent of the annual ice loss of Greenland occur in 30 minutes." "It sounded like rockets going off," he said, describing it as "a very complex, chaotic, noisy event." While the couple is studying Greenland, he said that "the real concern is in Antarctica, where everything is so big the stakes are much higher." 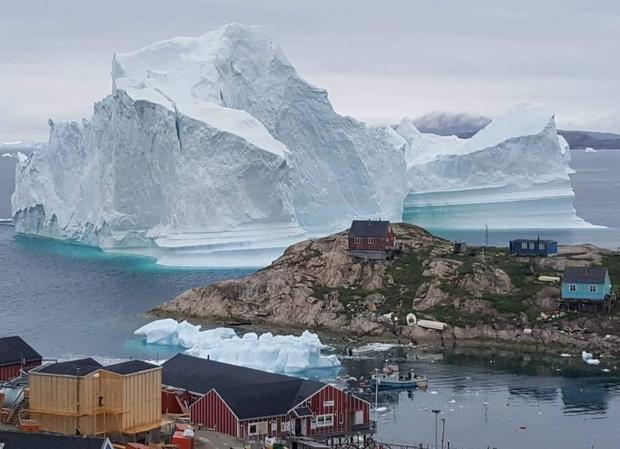 A picture taken on July 13, 2018, shows an iceberg behind houses and buildings after it grounded outside the village of Innarsuit, an island settlement in the Avannaata municipality in northwestern Greenland.​
In northwestern Greenland, another large iceberg was apparently grounded on the sea floor near the small village of Innaarsuit, which has a population of 169. "Its residents were evacuated in the early hours of Friday in fears that a flood would hit the place as a result of the broken iceberg," Greenland police spokeswoman Lina Davidsen told Danish broadcaster TV2. "All the people in the danger area have been evacuated to a building that is further up in the village," Davidsen said. "The evacuation happened only because the iceberg is so close to the village."

Innaarsuit is located about 1,000 kilometers (620 miles) north of Nuuk, Greenland's capital and largest city. Earthquakes and tsunamis have created major floods in Greenland in past years.

Massive iceberg breaks off from Greenland glacier
Click to expand...

St. Louis couple defends their house from protestors, with guns. Do you support "stand your ground laws"?
17 18 19