Huma reportedly ‘flipped’ against Hillary​
SALON’s editorial boardroom must be filled with happy-fumes. Hillary is the one after her head:


Saturday, Nov 5, 2016 07:00 AM EDT
Hillary Clinton, don’t even think of dumping Huma Abedin
Don't do it, Hillary. The growing cry for Huma Abedin's head must be ignored
Rebecca Johnson

Hillary turns people to stone just for looking at her sideways. Huma has become a tumor eating away at Hillary’s presidential hopes not to mention a threat to Hillary’s freedom. Huma will be lucky if she ends up under the bus: 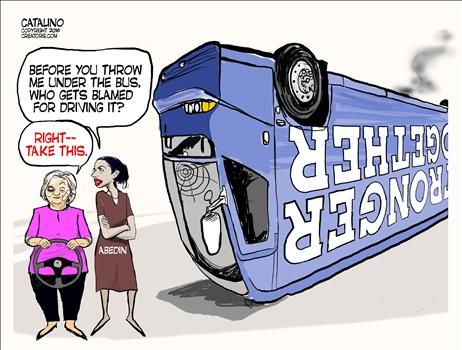 http://media.townhall.com/Townhall/Car/b/kn110216dAPR20161102024508.jpg
Flanders​
The basic test of freedom is perhaps less in what we are free to do than in what we are free not to do. It is the freedom to refrain, withdraw and abstain which makes a totalitarian regime impossible. Eric Hoffer
OP
F

Does this mean Huma the tumor and all of the little tumors are also off the hook?

FBI Director Comey says agency won’t recommend charges over Clinton email​
Flanders​
The basic test of freedom is perhaps less in what we are free to do than in what we are free not to do. It is the freedom to refrain, withdraw and abstain which makes a totalitarian regime impossible. Eric Hoffer
OP
F

TUMOR UPDATE​
Trump repeatedly said before his election that he would appoint a special prosecutor to look into Clinton's email scandal.

Separately, an FBI investigation into the Clinton Foundation has been under way for some time, looking at allegations of influence peddling.

Abedin's role in the foundation is likely to form a part of that probe, especially when she was paid by it and the State Department.

Damaging Wikileaks emails showed her receiving messages from Doug Band, Bill Clinton's right-hand man who effectively ran the foundation until around 2011 asking for State Department access for what he referred to as 'friends of ours' or 'good friend' - and who were also donors to the Foundation.

The discussion over the possibility of a pardon for Clinton herself is also uncomfortable as it would be likely to lead to calls for those who reported to her to be investigated more fully.​
EXCLUSIVE: Huma breaks down and weeps openly as she returns to campaign headquarters where she and her aides ran doomed bid to elect Hillary Clinton
By Geoff Earle, Deputy Us Political Editor For Dailymail.com
Published: 12:33 EST, 11 November 2016 | Updated: 13:03 EST, 11 November 2016

Huma Abedin weeps openly as she returns to Clinton campaign headquarters | Daily Mail Online​
Flanders​
The basic test of freedom is perhaps less in what we are free to do than in what we are free not to do. It is the freedom to refrain, withdraw and abstain which makes a totalitarian regime impossible. Eric Hoffer
OP
F

Flanders said:
Does this mean Huma the tumor and all of the little tumors are also off the hook?
Click to expand...


Mrs. Clinton has never been subjected to a full-blown criminal investigation, with FBI agents and prosecutors working jointly (rather than at cross-purposes), using the grand jury to compel the production of testimony and physical evidence. Such an investigation would be important here because Clinton did not act alone. Her use of private e-mail was systematic, with numerous staffers supporting it, covering it up, and moving classified intelligence through it; several underlings carried out the destruction of government files; many subordinates may have made false statements to FBI investigators; and the Clinton Foundation is a vast multi-billion-dollar enterprise — one that will continue its potentially criminal activities if a prosecution does not put it out of business.​
XXXXX​
Is the plan to pardon everyone involved, or should Mrs. Clinton get a pass while her minions face the anxiety and costs of potential legal jeopardy?


XXXXX​
Again, I don’t believe it will come to that. My sense is that President Obama will issue a pardon that covers not only Mrs. Clinton but any crimes committed by any person arising out of both the homebrew e-mail system and the Clinton Foundation — including any false statements and obstruction of the FBI’s investigations. That would make it case closed, sparing Obama embarrassment and Trump a political hot potato.​
Will Obama Pardon Hillary? Should He?
by Andrew C. McCarthy November 12, 2016 4:00 AM

Will Obama Pardon Hillary? Should He?​
I originally had some hope that the NYPD would run with the ball. My hope has not been dashed just yet, but it is falling at a rapid rate of speed. (The whole damn thing might be nothing more than Beltway perverts protecting one of their own à la Bill Clinton.):


WND has now confirmed with the New York Police Department that in the days leading up to the presidential election on Nov. 8, the FBI terminated the NYPD investigation of Clinton’s emails on former congressman Anthony Weiner’s laptop, demanding that the laptop and all 650,000 State Department emails be taken to the FBI in Washington.

The move by the FBI in D.C. to shut down the NYPD investigation set the stage for Comey to declare in a letter to Congress Nov. 6 that the newly discovered emails did not change the FBI’s original conclusion not to refer criminal charges.

WND has also confirmed with the NYPD that the FBI in Washington has blocked the NYPD from making any arrests in the Weiner “sexting” case involving an underage 15-year-old girl.​
File this one in the BULLSHIT drawer if Trump buys it:


Earnest also expressed hope that President-elect Trump would not pursue prosecuting Clinton after he takes office, noting that the tone of Trump’s remarks on Election Night appeared conciliatory toward Clinton.​

President Trump has the whole Kit & Kaboodle by the short hairs. If he lets them off cheap he can forget The Great Negotiator rhetoric he ran on. Negotiating against a foreign enemy is no different than negotiating against the enemies within. If The Donald is the negotiator he claims to be he should know that Obama, the Clintons, etc. are coming to the table looking to get something for nothing.

On Trump’s side of the table he can make the Clintons, the media, the Supreme Court, the FBI, the DoJ, and congressional Democrats pay plenty for him to drop it. In short: Squeeze them dry and to hell with this crap:


“We have a long tradition in this country of not – of people in power not using the criminal justice system to exact political revenge. In fact, we go to great lengths to insulate our criminal justice system from partisan politics,” Earnest said. “And that commitment has served our country very well for more than two centuries, and the president is hopeful that it will continue.”​
What next for Hillary investigation?
Posted By Jerome R. Corsi On 11/16/2016 @ 9:11 pm

What next for Hillary investigation?​
p.s. Democrats would go after Republicans if the shoe was on the other foot.
Flanders​
The basic test of freedom is perhaps less in what we are free to do than in what we are free not to do. It is the freedom to refrain, withdraw and abstain which makes a totalitarian regime impossible. Eric Hoffer
B

blastoff said:
I'm still betting Barry's planning some Clinton payback and doesn't help her out of her very serious messes.
Click to expand...

To blastoff: I wish it were true. Nothing would give most Americans more pleasure than to see her in an orange jump suit.

In truth: Obama is running scared. There is no telling what might come out in a trial. Huma the Tumor has the most to fear because she is the obvious choice to play sacrificial lamb:

http://www.americanthinker.com/images/bucket/2016-10/197400_5_.jpg
Flanders​
The basic test of freedom is perhaps less in what we are free to do than in what we are free not to do. It is the freedom to refrain, withdraw and abstain which makes a totalitarian regime impossible. Eric Hoffer
You must log in or register to reply here.

I’m a pedophile, but not a monster

Huma Abedin carries 6 yo. son Jordan in her arms as she puts on a very stylish show while doing ...
2

T
Rematch? Hildebeasty Claims People “Pushing Her To Run” In 2020...Did I call it?