Donald Maclean (spy) - Wikipedia​
If I was Huma Abedin I would be heading for a Muslim Country right about now:

A Lesser Offense Beats Hanging​
The guy in charge of the investigation better grab Huma Abedin the minute she comes within a hundred yards of a Muslim country’s embassy: 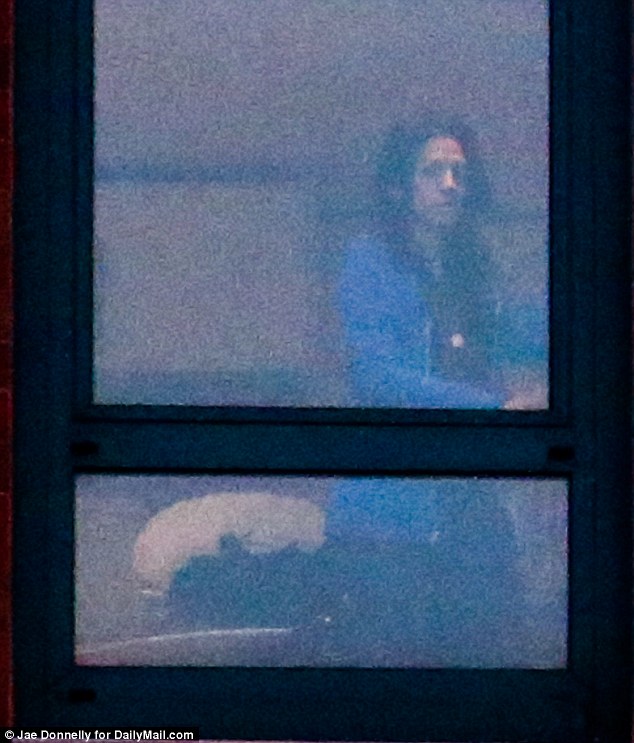 
'Voters deserve to get full and complete facts. And so we call on Director Comey to explain everything right away,' she said, calling out Comey by name.

She urged Comey to 'put it all out on the table.'​
‘Put it all out on the table’: Hillary ramps up her war with FBI director Comey as she hits out at his ‘strange, unprecedented and deeply troubling’ decision to announce reopening of email probe
By Geoff Earle, Deputy U.s. Political Editor and Regina F. Graham For Dailymail.com
Published: 12:23 EST, 29 October 2016 | Updated: 22:45 EST, 29 October 2016

‘Put it all out on the table’: Hillary ramps up her war with FBI director Comey | Daily Mail Online​
In the unlikely event Hillary is telling the truth the only thing she has to do is tell Huma to give the FBI investigators everything they want to look at.
Last edited: Oct 30, 2016

Huma better stay as far away from hiLIARy as possible. Best to leave the country, yes. For some reason, people who get in the way of hiLIARy's political ambitions wake up dead

Dot Com said:
Huma better stay as far away from hiLIARy as possible. Best to leave the country, yes. For some reason, people who get in the way of hiLIARy's political ambitions wake up dead

Her mistake was to get involved in the first place.

She better run, not walk, to the nearest Middle Eastern Embassy and beg for asylum before hiLIARy's people get their hands on her

Dot Com said:
Huma better stay as far away from hiLIARy as possible. Best to leave the country, yes. For some reason, people who get in the way of hiLIARy's political ambitions wake up dead

Sure wish ya'll could make something stick, you could have saved the nation with all your certainty.
OP
F

The Great Goose said:
Her mistake was to get involved in the first place
Click to expand...

To The Great Goose: Very true —— if she did not start out as an agent for the Muslim Brotherhood:


Hillary Clinton's closest personal aide as SecState was Huma Abedin – an Ikhwan insider. Abedin was one of the few people who had access to Hillary's illegal personal e-mail account on the night of Benghazi. Nothing has changed – Abedin is still at the top of the Hillary campaign. Probably for the first time in U.S. history, presidential candidate Hillary has stonewalled any media questions, period.

Major Ikhwan money flows have been reported going to the Clintons, the Carters, and Obama. Ikhwan penetration of American society and the U.S. government gives all the appearance of a political quid pro quo – with our survival at stake.​
Bill Gertz's Pentagon documents now prove the Ikhwan connection directly.

Blog: Gertz Expose: Pentagon docs show Obama supports Muslim Brotherhood​
XXXXX​
The first question any competent investigator would ask himself is this: Who benefits the most by deleting the top secret marking from a document? Of course, I am only speculating, but in this case my answer leads to Huma Abedin. What better way to get information to Ikhwan than Clinton’s e-mails?

Huma Abedin is at risk more than all of the others. If just one e-mail containing top secret information is tied to the Muslim Brotherhood (Ikhwan) she runs the risk of getting caught in a lie. Telling the truth could be worse:​
. . . Huma Abedin’s mother, Saleha, who is a member of the Muslim Brotherhood’s female division (the “Muslim Sisterhood”), is a major figure in not one but two Union for Good components. The first is the International Islamic Council for Dawa and Relief (IICDR). It is banned in Israel for supporting Hamas under the auspices of the Union for Good. Then there’s the International Islamic Committee for Woman and Child (IICWC) — an organization that Dr. Saleha Abedin has long headed. Dr. Abedin’s IICWC describes itself as part of the IICDR. And wouldn’t you know it, the IICWC charter was written by none other than . . . Sheikh Qaradawi, in conjunction with several self-proclaimed members of the Muslim Brotherhood.​
Huma Abedin’s Muslim Brotherhood Ties
by Andrew C. McCarthy July 25, 2012 4:00 AM

To Dot Com: Only if you think history does not repeat itself:

Consider this: Before, during, and after WWII ended, the only thing the FBI had to start with was that suspected Communist spies might have been members of the Communist party. Alger Hiss is classic:

Alger Hiss, the Russian agent who served as FDR’s top aide, was probably the most influential traitor in America’s history, yet the FBI caught him and others with a lot less to start with than they have on Huma Abedin’s background.


Could it be that keeping Huma Abedin on the inside is part of the quid pro quo for the 42. 4 million?​
Hillary Clinton’s top aide Huma Abedin has deep and, so far, unexplained connections to a Saudi Arabian man who ran a Saudi organization that U.S. intelligence connected to terror funding during both Bill Clinton and George W. Bush’s administrations, but escaped scrutiny after pressure from the Saudi Arabian government.​
It gets curiouser and curiouser.​
Consider the timing: in the fall of 1996, Huma Abedin began working in the White House. Harper’s wrote:​
After 9/11, Saudis Had Huma Abedin-Connected Group Removed from Terror List
by Lee Stranahan
14 Jun 2016

1. Did Clinton know how much influence Saudi Arabia exercised on Abedin’s behalf?

2. Did Clinton use her own influence to shield Abedin’s perch on the inside?

My point. To ignore a pattern traitors in every country follow is pure stupidity. It is criminal to not investigate anybody in high places who engage in the very things a traitor must do in order to succeed. I am not talking about hiding a micro dot in a matchbook cover. I am talking about traitors who openly betray politically; with influence, laws, rules, diplomatic contacts, etc. So it is hardly a witch hunt to take a closer look at the very people who helped Hillary Clinton & Company get away with espionage to say the least. Obama, Loretta Lynch, and, sad to say, James Comey are prime candidates. The question is: How in hell could Hillary have gotten away with so much acting on her own?

Huma Abedin Swore Under Oath She Gave Up ‘All the Devices’ With State Dept. Emails​
Finally, the only conspiracy I can see is the one Hillary Clinton’s co-conspirators engage in to shield her.
OP
F

Flanders said:
What better way to get information to Ikhwan than Clinton’s e-mails?
Click to expand...

Jerome R. Corsi lays out how the method for sending top secret information to the Muslim Brotherhood was created and nobody the wiser until the shit hit the fan:

In September and October, WND made repeated attempts, contacting attorneys and security experts, to see if there was a way to get Yahoo.com to disclose all IP addresses that may have accessed humamabedin@yahoo.com, suspecting both that Abedin may have downloaded her humamabedin@yahoo.com on a device owned by or shared with her husband, or possibly via an IP address located in a foreign country.​
Here is the why:


On July 25, 2012, WND reported that Abedin has family ties to the Muslim Brotherhood, including having worked on the editorial board of a Saudi-financed Islamic think tank alongside Abdull Omar Naseef, a Muslim extremist with close ties to the Abedin family who has been accused of financing al-Qaida fronts.

In that article, WND further reported then–Rep. Michele Bachmann of Minnesota sent letters to the inspectors general at the departments of Homeland Security, State, and Justice asking that they investigate Muslim Brotherhood influence on U.S. government officials, noting with particular concern that Abedin has three family members – her late father, her mother, and her brother – connected to Muslim Brotherhood operatives and/or organizations.​

Yahoo holds key to FBI probe of Hillary-Huma emails​
Finally, for years I warned “Never let Democrats come anywhere near an intelligence agency.” Obviously, nobody in authority ever heard about me or my warning. Maybe I will get lucky with this one: “Never give Democrats security clearance.”


I assume Hillary Clinton still has her top security clearance:

Flanders said:
The guy in charge of the investigation better grab Huma Abedin the minute she comes within a hundred yards of a Muslim country’s embassy:
Click to expand...

Holy crap! I had it backwards. President Hillary Clinton might have to pull a Maclean:


The inquisitive keep asking: “What’s wrong with Hillary Clinton’s face?” It’s not the latest mysterious gash on her cheek, or her signature smarmy smile that should be sending chills down the spine of the Western World. It’s that Hillary’s face is above all else, at least since her days as First Lady, the chosen front for Saudi Arabia, via their plant Huma Abedin.


XXXXX​
Were the chattering classes too caught up in the salacious details of the Hillary and Huma alleged, long-standing lesbian affair to realize that Hillary Clinton as Secretary of State was the chosen front for Saudi Arabia?

It should hit voters like a glass of ice water in the face knowing that Saudi Arabia having run the State Department through Secretary Hillary Clinton, is now going after the White House.

What’s wrong with Hillary’s Face?  HUMA ABEDIN!​
Here is the question the inquisitive should be asking: What kind of work will Hillary do for Saudi Arabia after she defects?


By the time he was appointed head of the American Department in the Foreign Office, Maclean was widely suspected of being a spy, and the Russians persuaded him to defect in 1951. In Moscow, he worked as a specialist on British policy and relations between the Soviet Union and NATO.

Flanders said:
In the unlikely event Hillary is telling the truth the only thing she has to do is tell Huma to give the FBI investigators everything they want to look at.
Click to expand...

Whoever said this does not know Hillary:


HUMA DOWN, NOT OUT

Where we are at on Trump's scandals, fines and current investigations and court cases

A Chapter In U.S. History Often Ignored: The Flight Of Runaway Slaves To Mexico

California: It pays to be rich

What did our founders really mean when they said “general welfare”?
62 63 64