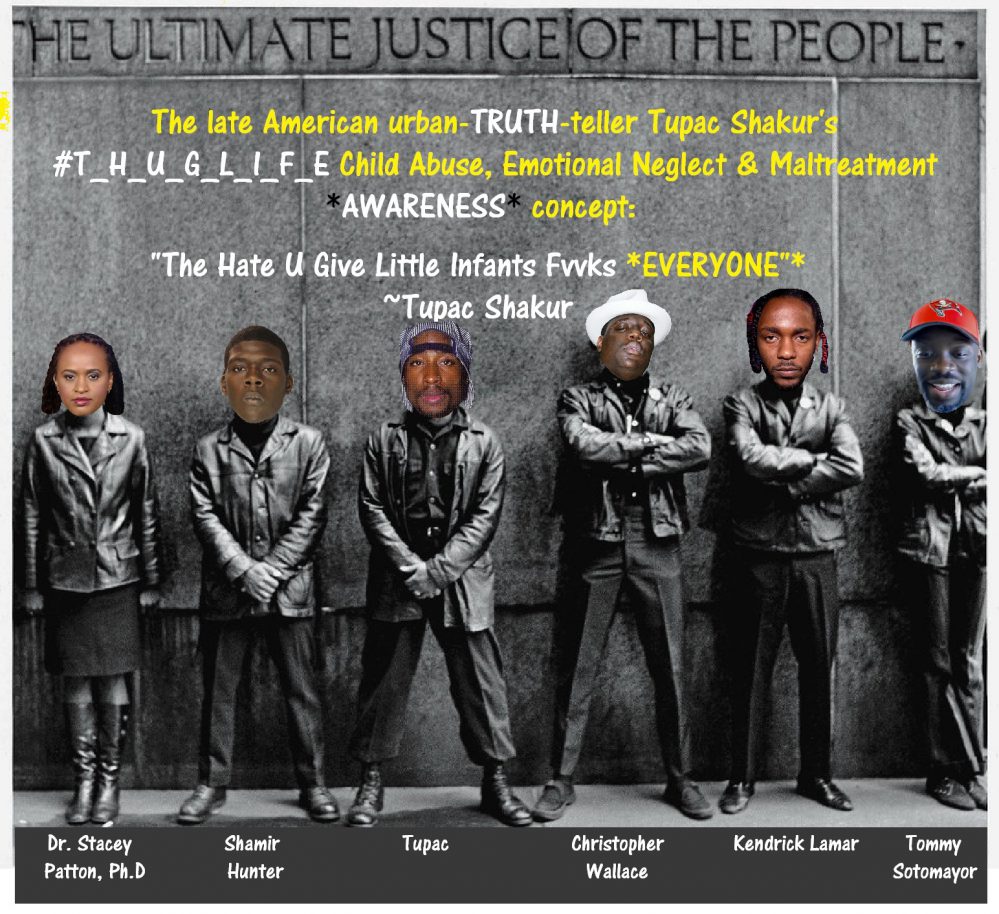 After reading the title and watching a few minutes of this video, I felt a need to offer another perspective of American history occurring during this frequently tumultuous and violent, as well as peace spattered period of American societal and human evolution.

Respectfully, this video broadcast about America’s Black Panther Party bolsters my belief that significant numbers of my black or African American neighbors are experiencing some type of emotional or mental illness preventing or impeding them from recognizing REALITY. 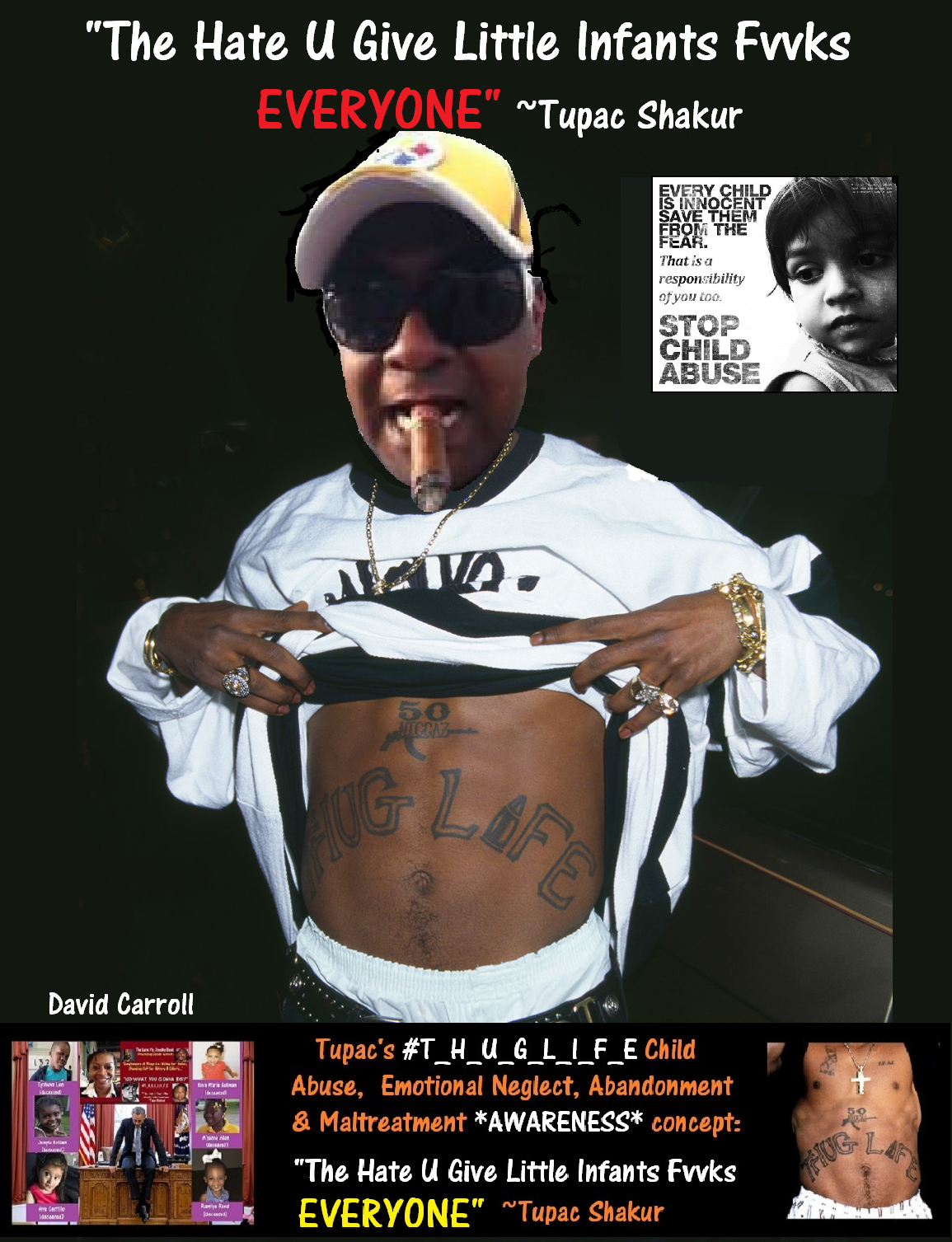 
​
I recognize during the ongoing evolution of our imperfect, often ignorant and self destructive human species, THROUGH NO FAULT OF THEIR OWN, untold numbers of peaceful human beings have been grievously harmed, as well as, UNJUSTIFIABLY deprived or impeded from enjoying basic human rights that we recognize in today’s ever-evolving American society.

I also recognize indisputable historical evidence clearly shows both of the late, popular American urban story-TRUTH-teller Tupac Shakur’s parents and several other people in his family were members of the Black Panther Party.

Tupac, an admitted depressed, suicidal thinking teen and adult revealed he committed serious crimes against his peaceful neighbors in order to survive an abusive, traumatic potentially life scarring childhood upbringing, that THROUGH NO FAULT OF HIS OWN, deprived Tupac from enjoying a SAFE, fairly or wonderfully happy American kid childhood all Americans have an ABSOLUTE NEED to experience during a critical period of human/childhood development.

I am referring to a Culture of Child Abuse, Emotional Neglect, Abandonment and Maltreatment responsible for popular American urban story-TRUTH-tellers the late Tupac Shakur (born 1971) and Mr. Barack “My Brother’s Keeper” Obama White House guest and friend Kendrick Lamar (born 1987) vividly describing in their American art and interviews the “T.H.U.G.L.I.F.E.” and “m.A.A.d. City” Child Abuse Cultures that THROUGH NO FAULT OF THEIR OWN, deprived these American men, their childhood friends, as well as many of their elementary and JHS classmates from experiencing a SAFE, fairly or wonderfully happy American kid childhood. 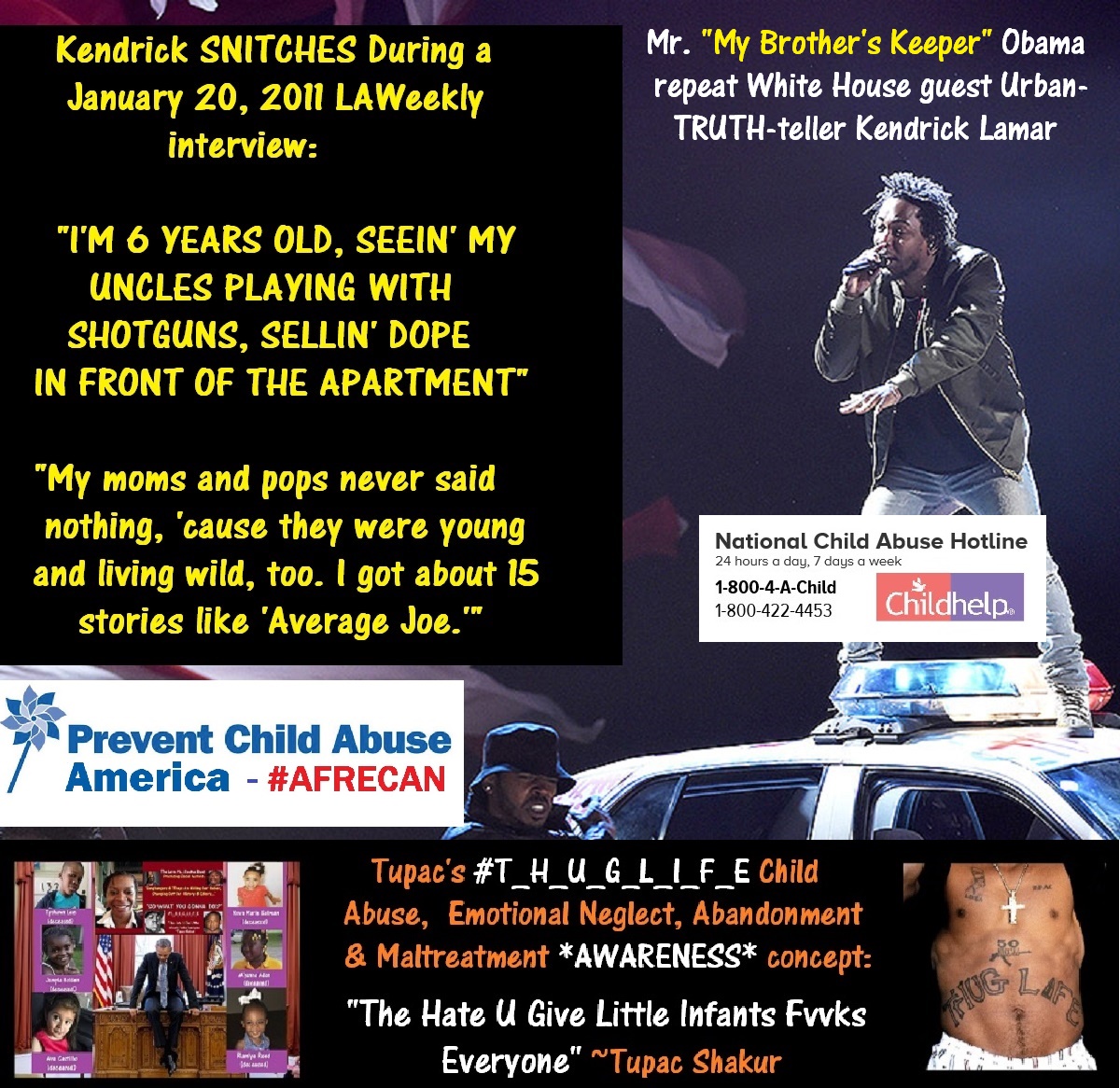 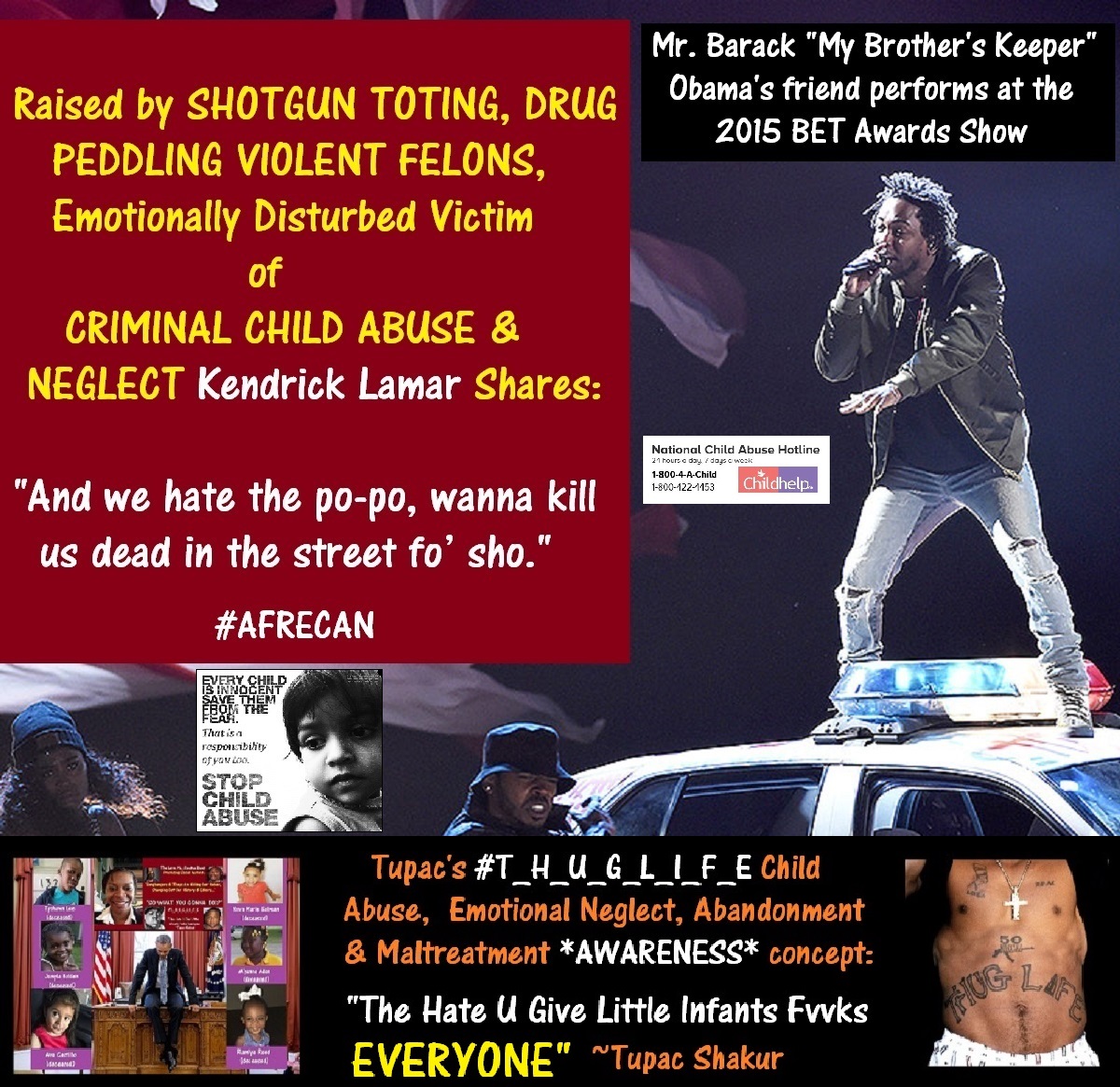 ​
Sadly, the traumatic, potentially life-scarring Criminal Child Abuse and Emotional Abandonment each of these men speaks about experiencing during a critical period of human/childhood development, resulted with them maturing into emotionally ill adults revealing in public they’ve been experiencing acute depression as well as Suic*dal Thoughts for most of their lives.

The same Culture of African American Child Abuse, Neglect and Maltreatment that for more than 30 years has been inspiring significant numbers of popular urban story-TRUTH-tellers to compose and promote American music art informing our world American teen girls and women, aka the MATERNAL HALF of our population, should be viewed as less than human *itches and treated like *hores or ‘hoes’ unworthy of basic human respect. 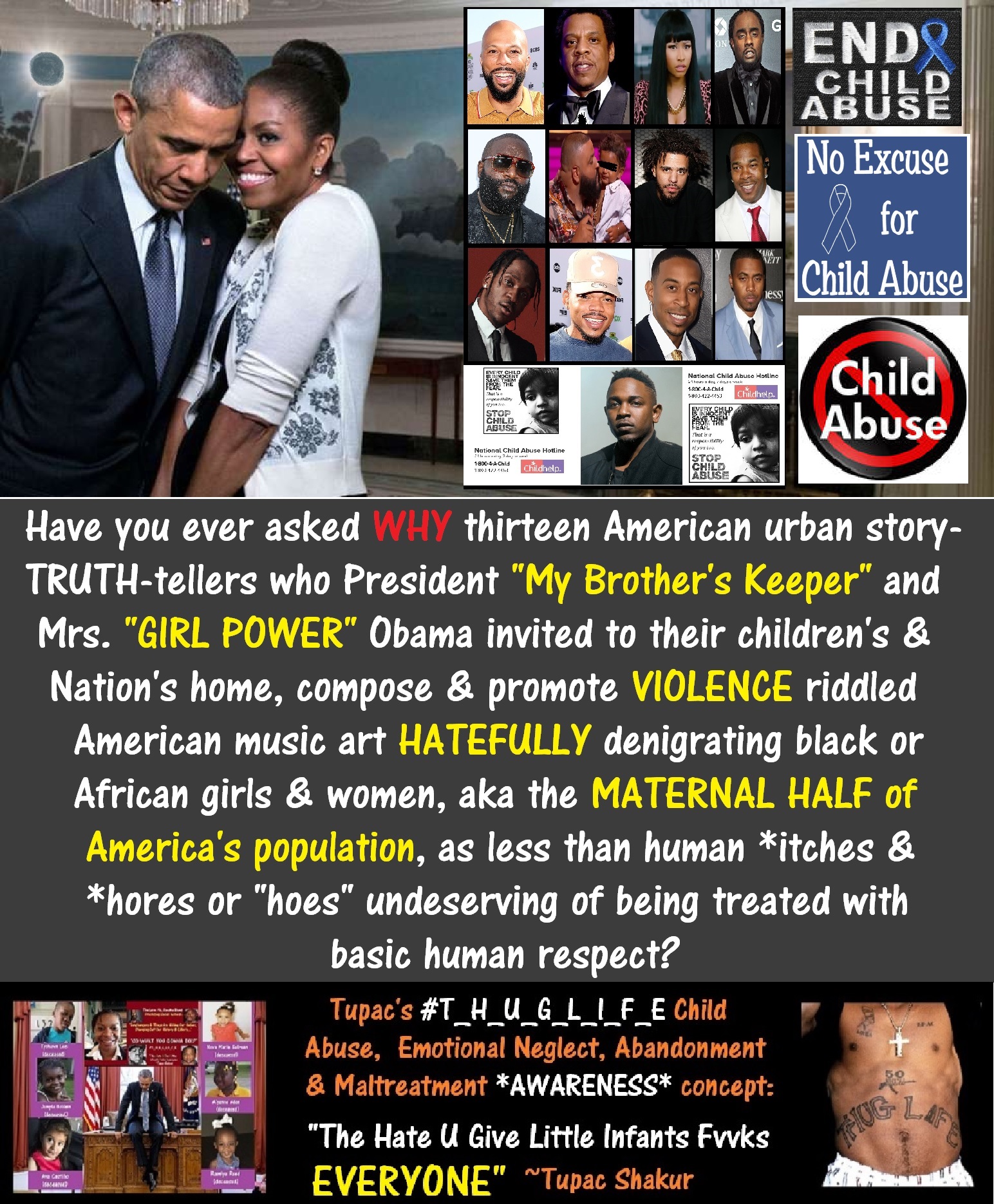 ​
Unfortunately, it’s plainly evident Kendrick, Tupac as well as untold numbers of American children are being raised, nurtured and socialized by moms experiencing some type of illness preventing and impeding them from embracing and following their innate, natural maternal instinct to protect their child or children from harm.

Perhaps I’m wrong but something is preventing significant numbers of American moms from recognizing that placing ABOVE ALL ELSE the emotional well being of our Nation’s most precious and cherished assets, will most likely result with a fairly or wonderfully happy child maturing into a reasonably responsible teen and adult citizen caring about their own well being (May 18, 2015 – Rise in Suic!de by Black Children Surprises Researchers – The New York Times), as well as embracing compassion, empathy and respect for their peaceful or less fortunate neighbors.

Does the late American urban story-TRUTH-teller Tupac Shakur offer a reasonable explanation for why significant numbers of American children are being impeded, hampered or prevented from maturing into reasonably responsible, well-adjusted American teens and adults who become doctors, scientists, engineers, educators, business owners or leaders?

Does Tupac offer a reasonable explanation for why Americans of African descent are being impeded from experiencing the equality and respect all peaceful, reasonably responsible Americans are entitled to enjoy?

“The Hate U Give Little Infants Fvvks EVERYONE“ ~Tupac Shakur

“We need more people who care; you know what I’m saying? We need more women, mothers, fathers, we need more of that…” ~Tupac Shakur 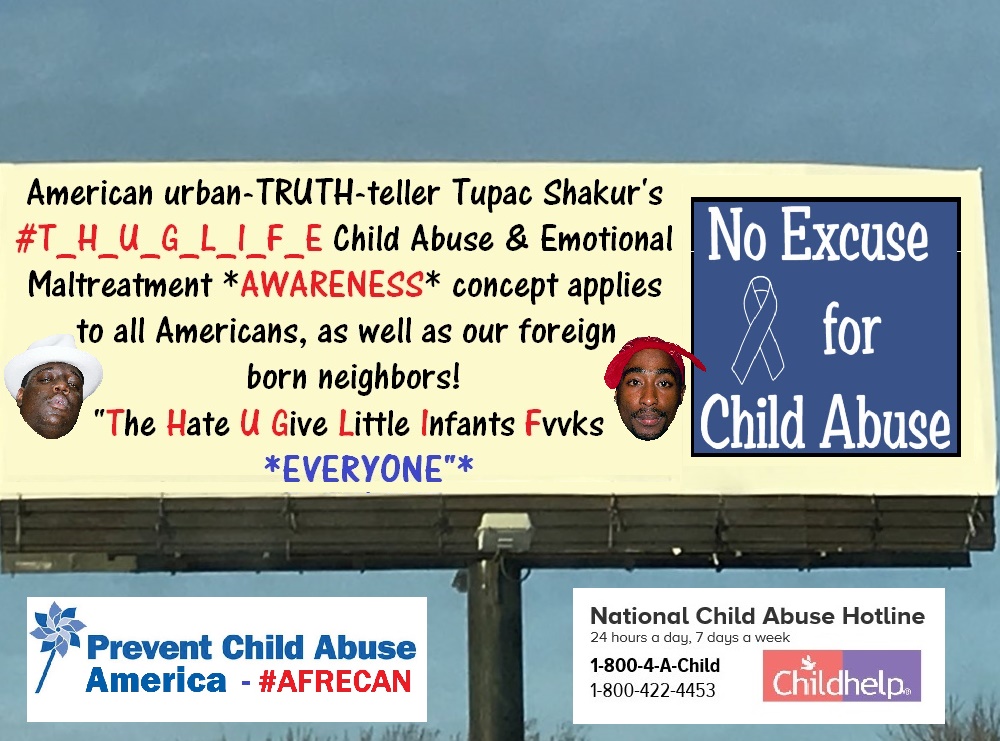 ​
Tupac, an admitted emotionally ill adult who loudly spoke about experiencing childhood abuse and maltreatment during a critical period of human/childhood development, intelligently recognized not only are American kids being UNJUSTLY OPPRESSED, IMPEDED and DEPRIVED from experiencing their full human potential, as well as a SAFE, fairly or wonderfully happy American kid childhood…

…Tupac realized OUR NATION is being deprived of enjoying the potential achievements offered to ALL Americans by fairly or wonderfully happy kids maturing into reasonably responsible teens and adults caring about the future of OUR Nation, and the welfare of their peaceful, as well as less fortunate neighbors.

Unlike Mr. Barack “My Brother’s Keeper” Obama and his presidential predecessors, I am hopeful Renegade Republican Donald Trump will take meaningful ACTION to protect from harm our Nation’s most precious and cherished assets by placing an emphasis on EDUCATION about proper child care, as well as stepping up enforcement of Child Safety & Protection laws which will eventually lead to fewer depressed, unhappy, emotionally neglected/abandoned American kids… 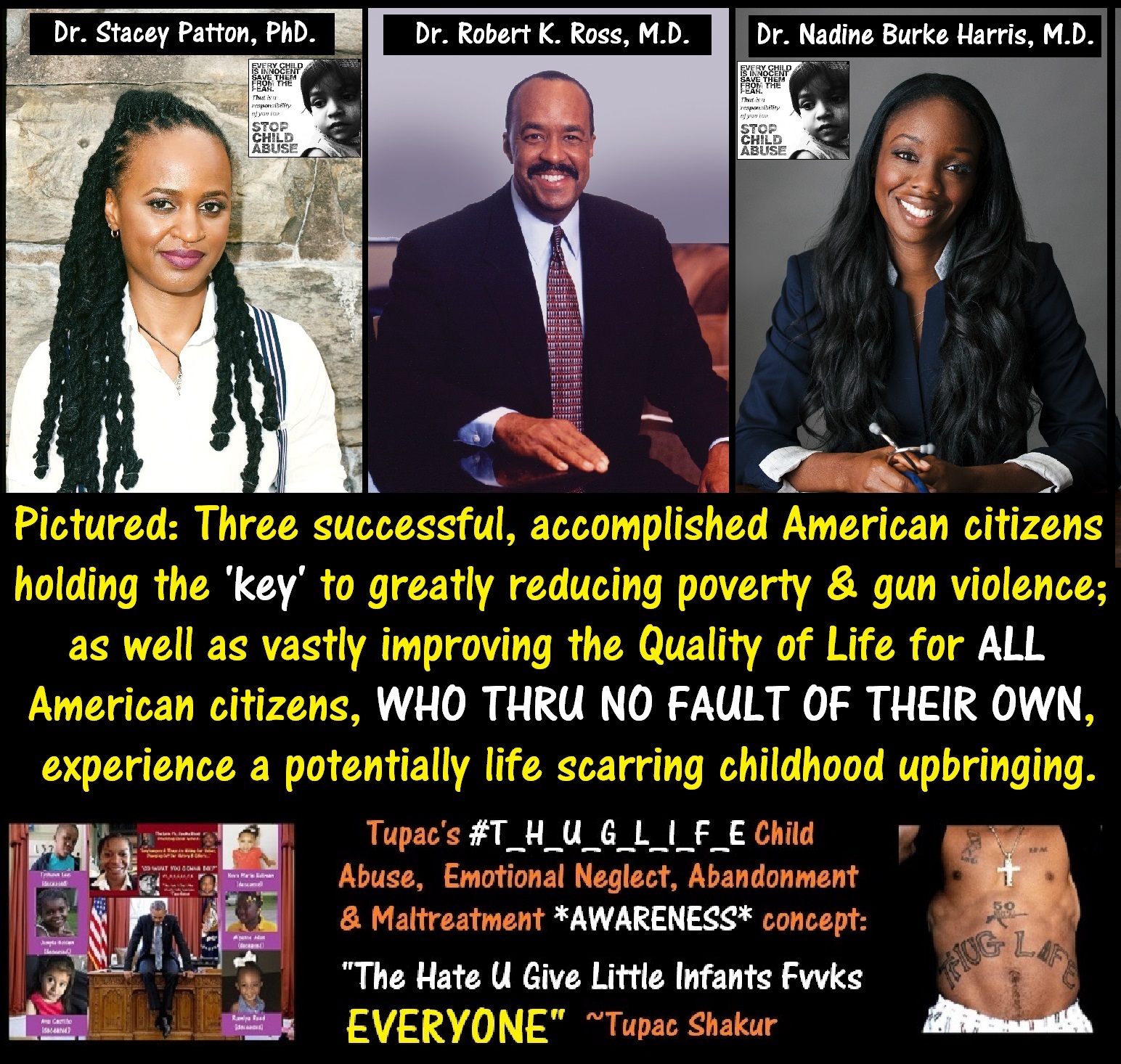 ​
Unfortunately, before he gained the confidence to properly promote his #T_H_U_G_L_I_F_E Child Abuse AWARENESS concept, Tupac was brutally murdered by OTHER emotionally or mentally ill victims of America’s Culture of African American Child Abuse, Neglect and Emotional Maltreatment evolving from America’s multi-generational, ignorant, once legal Culture of Racism!!!

Not only I am asking Mr. Trump to take meaningful ACTION protecting and preventing American kids from experiencing a potentially life-scarring, traumatic childhood…

…I am asking my American neighbors to RECOGNIZE and embrace the fact our imperfect human species will continue evolving, learning day by day about our human condition and physical world, slowly shedding our human ignorance and adapting as we continue plodding along trying to improve the Quality of Life for all human beings!
__
My friends, during the 80s-90s I spent the first twelve years of my police career as a Brooklyn, NY cop, robbery and death investigator regularly witnessing significant numbers of newborns, infants, toddlers, children and teens, through no fault of their own experiencing a potentially life-scarring medical Disease/Condition known to medical doctors and researchers as “Childhood Trauma.”

“Childhood Trauma” is a REAL Disease/Condition affecting far too many American kids and teens who far too often develop into emotionally damaged teens and adults lacking empathy, compassion and respect for their peaceful neighbors because they believe their lives suck so why shouldn’t other people’s lives suck too!!!

The GOP in a Post-Trump World

The Disrespect of the American Flag and National Anthem