How are Black Americans doing in this economy?

A growing share of blacks are completing high school and college. For the first time in U.S. history, 90% of Americans ages 25 and older have completed high school, according to the U.S. Census Bureau – and the share of blacks who have done so is also at the highest level on record. In 2017, 87% of blacks ages 25 and older had a high school diploma or equivalent. Although the high school completion rate for non-Hispanic whites was higher (94%) than for blacks, the gap has been gradually shrinking. In 1993, the high school completion gap was twice as large (14 percentage points) as it is today (7 points). The share of blacks ages 25 and older who have completed four years of college or more has also roughly doubled during that span, from 12% in 1993 to 24% in 2017.
Black households have only 10 cents in wealth for every dollar held by white households. In 2016, the median wealth of non-Hispanic white households was $171,000. That’s 10 times the wealth of black households ($17,100) – a larger gap than in 2007. The Great Recession of 2007-2009 triggered a stark decline in wealth for U.S. families and further widened the already large wealth gap between white and black households. Yet the black-to-white wealth gap has evolved differently for families at different income levels, according to a Pew Research Center analysis of Federal Reserve data. The wealth gap increased between middle-income black and white families, but shrank between lower-income black and white families from 2007 to 2016. Much of the reduction in the wealth gap among lower-income families was driven by a sharp decrease in wealth for whites.
Based on PEW Researcher Center and the latest Census.

I don´t have a single fuckn Cent!
D

The welfare system in many ways is a determent to wealth accumulation among the poor.

The increasing number of "Blacks" completing high school and college can be entirely attributed to lowered standards in Academe, where those who would have been tossed out in previous times are kept in, in order to make the "numbers" look better. All government agencies that are measured by numbers do this, and schools are government agencies. We all know it; it is obvious. There may be some benefits to pushing Blacks through, but they are extremely minor and speculative. A Black man or woman entering the working world with a degree in Communications or - worst of all - anything carrying the label "Studies" will do no better economically than a HS grad with average "smarts" and a little ambition.

The only relevant information is rarely published. How do the various demographic groups do economically WHEN THEY PLAY BY THE RULES?

Do they plan their lives according to traditional middle-class norms?
For normal middle-class "white" people, these things almost go without saying. If a 25 year-old, single, unemployed white woman with three illegitimate kids (to three different fathers) complained that she is struggling, she would be rightly excoriated, but if a "Black" woman does the same, "we" are supposed to sympathize with her, because there ain't enough government benefits to keep her comfortable.

But I want to see the statistics on how goes life for people who do all those "middle-class" things. Are they living in poverty? Are they experiencing long periods of unemployment? Are they "held back" by RACISM, SEXISM, or any other of the elusive ISMS? Show me the data and then we'll have a conversation.

Saying that "Black" people don't have as much wealth as "white" people is meaningless without accounting for the choices they make. Show me someone who is playing by the rules, and is truly harmed by racism and I will fight like hell to set it right. But in our culture, claims of racism are nothing more than an excuse for failure.

usmcstinger said:
Black households have only 10 cents in wealth for every dollar held by white households..
Click to expand...

Which has nothing to do with skin color. That is a meaningless statistic.

Joe Biden is basing his entire candidacy on a discredited lie, trying to make President Trump seem like a racist so that Biden can present himself as some sort of “anti-racist” candidate. That’s the furthest thing from the truth.

In the video announcing his candidacy for the Democratic presidential nomination, Biden cherry-picked a partial quote from remarks the president made in the immediate aftermath of the Charlottesville riots, stripped it of context, and presented it as evidence that Trump had called neo-Nazis “fine people.”

That’s a load of malarkey, and Biden knows it, because President Trump also said that “neo-Nazis and white supremacists ... should be condemned totally.” The “fine people” he was referring to were the ordinary Americans, “on both sides,” who felt passionately enough about a civic issue to demonstrate — peacefully — on behalf of their views.

There are two central lies within Biden’s launch video. The first is that Trump has had a negative impact on the black community, and the second is that Biden could do better.

In reality, though, President Trump has done more for black Americans in just over two years than Biden has done in five decades as a public official.

First and foremost, the black unemployment rate is now at its lowest point in history, due in large part to the president’s efforts. Not only has the America First agenda unleashed an historic economic boom, especially for blue-collar Americans, but Trump has also made it a priority to stop illegal immigration, which has disproportionately detrimental effects on the safety and the wages of black workers.......(SNIP)

There are many more new cars and trucks to steal than pre-tRump !

How and why convicted Atlanta teachers cheated on standardized tests 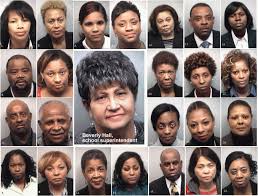 ........considering they graduate high school at lower levels = less qualify for college, they are over represented in great jobs such as USPS/auto-manufacturing/etc
You must log in or register to reply here.

Herschel Walker: ‘Why Are We Penalizing People for What Their Ancestors Did?’
7 8 9

A moment ago
EdwardBaiamonte
E