"We found that increased consumption of high fructose corn syrup was associated with scarring in the liver, or fibrosis, among patients with non-alcoholic fatty liver disease (NAFLD)," said Manal Abdelmalek, MD, MPH, associate professor of medicine in the Division of Gastroenterology/Hepatology at Duke University Medical Center.
Click to expand...

It could also be related to non alcoholic levels of beer consumption?
I notice that was not mentioned in the study results.
Last edited: Mar 23, 2010

I try to never use the shit.

I have been drinking Mt. Dew several times a day ever since it was invented.
Actually it was first called Kickapoo Joy Juice
And my liver tests always show fine.
I have have it checked every 6 months due to my high level of pain pill consumption.

Sitll it can depend on your genetics I suppose. Some may be more succeseptable than others.
Last edited: Mar 23, 2010

No high fructose corn syrup for me

I always wonder what bacteria is lurking everywhere, besides progressives that is

Some liver transplants 'avoidable'
4 May 2013 - Some patients with severely damaged livers may not need a transplant as their own organ is actually regrowing, say doctors at a hospital in London.

They made the discovery by looking at a rare group of patients given a transplant while their own damaged liver is left in the body. Sometimes the original liver recovers. A study, in the American Journal of Transplantation, suggests doctors can predict which patients do not need a transplant as their liver is healing. King's College Hospital has a leading liver transplant centre and is one of few places to perform "auxiliary transplants". They are performed in sudden cases of liver failure caused by overdoses or viral infections, rather than the long-term damage caused by alcohol abuse. Normally in organ transplants one organ comes out and a new one goes in. However, in this complex operation the transplant is put in beside the old liver.

After any transplant a patient needs to take a lifetime of drugs to suppress the immune system in order to avoid rejection. The drugs leave the body vulnerable to infection. However, if the patient's liver does eventually recover then they can come off the immunosuppressant drugs and their body will get rid of the transplant. The transplant is used to get the patient past the critical stage of the illness. But the recovery happens only in some patients. In the study, the transplant was no longer needed in seven out of 11 patients. So doctors analysed the detailed chemistry inside the liver cells of patients and looked for differences between those who recovered and those who did not. 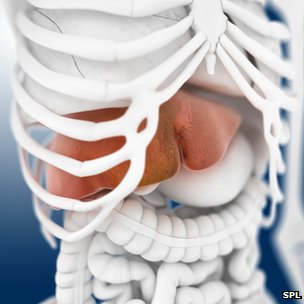 The liver clears the body of toxins

Dr Varuna Aluvihare told the BBC: "There was a big difference right from the point of transplantation in the expression of some very small molecules between the group that would, three years down the line, regrow their liver versus the group that never did." Those molecules regulated the way cells in the liver grow. "Some of them were already starting to regrow. So what we may be able to do is come up with a better set of tests to allow us to identify those patients who are already regrowing and may not need transplantation. "So we may be able to remove a group from the transplant list." The liver does have a phenomenal ability to regenerate. In healthy people it will recover in the space of months even if a large amount is taken away.

People who need a transplant because of acute liver failure are seriously ill. Even if doctors could tell which patients' livers were already on the path to recovery, they would still need to keep those patients alive long enough for the liver to return to form. Dr Aluvihare argued this would be possible as a small amount of restored liver function would be enough for patients to leave hospital. He said there are cases at King's of patients recovering while they were on the waiting list. "I would say five to 10 patients a year we seriously consider for emergency transplantation and then they start recovering. "That tells us there probably is a pool there and there is probably quite a lot of mileage in identifying people would would recover." Whether this would work is still uncertain. The team have received funding to look for those chemical differences in the blood of patients.

Personally I wonder what all the bio-engineering of all the foodstuffs we eat will lead to. We already have intervened in natural selection and what we now rely on for sustenance is being engineered for profit not for health. Fructose Corn syrup, while seeming to be a wonder substance, could actually be the cause of overweight Americans and the rising incidence of diabetes.

The products we eat that have wheat or gluten in it is genetically altered and from what I have been reading that is the cause of many of health problems in our society. Wheat was a vital grain for many years but when it was bio engineered to make it easier to grow ... ahh I digress.

Makes one wonder what world our children are going to live in.

the bio-engineering of all the foodstuffs exists for the same reason as other agri-products exist. To get more product to market.
Agriculture is all powerful and faultless .
And God made them.
Good DAY!

Watch out folks. Obamacare has ushered in a brand new wave of state control of health issues. Pretty soon "research" will show that everything you like will kill you.
You must log in or register to reply here.

A moment ago
shimon
S