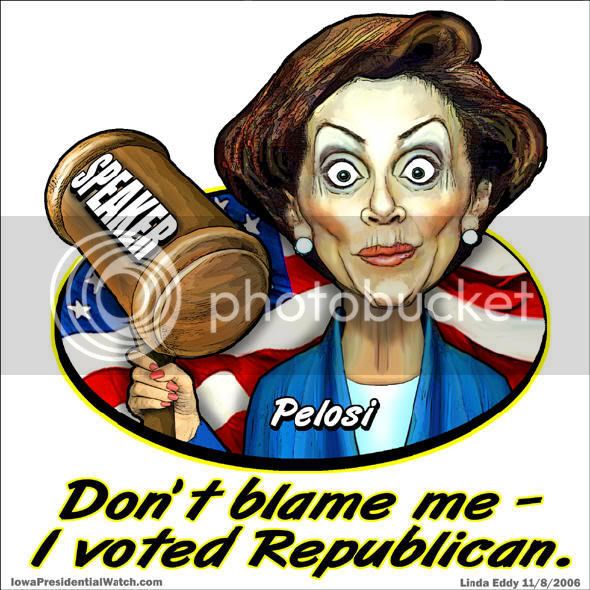 My view on all this....
I suppose we'll see now, what the Democrat party, IS REALLY MADE OF...
Whether they will be the party of revenge...Or a party that will put America and Americans first?

Oh, and I heard John Murtha on CNN tonight say, HE wants the position of Speaker of the House...:

The Rebirth of Democracy!
I headed over to Rachel Corry Elementary School to cast my ballot this evening when my path was blocked by what resembled a human Clydesdale, with the body odor to match.

Who the hell are you? I demanded. What is the meaning of this? And what smells like horseshit?

My name is Jimmy Clydesdale, he introduced himself. Im with Operation: Restore Democracy Now!, a grassroots, non-partisan, interfaith organization devoted to protecting the integrity of the electoral process from Republican voters. Were here to monitor todays elections and keep an eye out for any GOP operatives that might try to horse around with the system, if you know what I mean.

Splendid! I chirped. Its reassuring to know that someone is looking out for the little guy, girl, or proud member of the transgendered community.

Thank you, sir, he replied, but Im afraid I cant let you inside with THAT on! He poked a furry hoof at my flag lapel pin in disgust. Any outward displays of patriotism might adversely effect how people vote tonight. We have to keep everything fair and balanced you know. Im sorry to be a nag, but I'm sure you understand.

Ah, but the flag is upside down, I corrected him. And I peed on it before coming here.

Oh, my mistake! he quickly apologized. Please go on in. Ill just follow along to make sure you arent threatened or coerced by any Republicans.

We proceeded together to the registration table where an elderly woman asked for my name and I.D. in three different languages before settling on English. I dismounted Jimmy and handed her my Hot Topic Preferred Customer card while she fumbled around for my ballot. Moments later I was in a private booth exercising my civic duty to throw the Republican usurpers out of office so we can finally surrender with honor in Iraq. Jimmy stood protectively behind me as I voted, whinnying loudly if my pen drew perilously close to a GOP candidate, or angrily stomping one of his feet if I appeared to be voting in favor of an anti-tax initiative, but otherwise everything went smoothly and I wasnt pressured or intimidated by any right-wing election thieves. When I finally finished voting, I left the booth and proudly marched to the ballot box for the fifth time in as many hours.

Not so fast, sir, Jimmy snorted, roughly blocking my way again. I noticed that in the senatorial race, where you meant to check Maria Cantwell, you accidentally wrote in Hugo Chavez. Care to explain yourself?

KKKantwell voted for the Iraq War and then never bothered to vote against it, I bluntly informed him. Shes nothing but the Shrub's lapdog and ILL BE DAMNED IF I EVER GIVE HER EITHER MY VOTE OR A WILD NIGHT OF CRAZY MONKEY SEX EVER AGAIN!!!

Jimmy trotted me out to my Segway and we party company. I hope that in other cities across America, progressive voters were blessed by the protection of courageous election monitors such as he. I enjoyed the experience so much that I went back two more times before the polls finally closed.

Location
Solidly in the lower third of the upper middle cla

Whether they will be the party of revenge...Or a party that will put America and Americans first?

Knowing a little about political history, I expect the high road will be mostly deserted during the next two years.

MGB said:
Whether they will be the party of revenge...Or a party that will put America and Americans first?

Knowing a little about political history, I expect the high road will be mostly deserted during the next two years.

Lieberman May Hold The Power

B
With Biden Sworn In,‭ ‬QAnon Leadership And Members Melt Down

Biden too tired to be President today...calls lid on being seen in public today...will nap and watch his stories...
2 3 4

Who would you like to see be the Republican Nominee for President in 2024?
4 5 6

Embarrassing: WH Reporters Turn into Lapdogs for Psaki After Raging at McEnany
6 7 8