Controversial illustration refers to group whose members are believed to have been behind recent rocket attacks on Israel.
islamic jihad cartoon 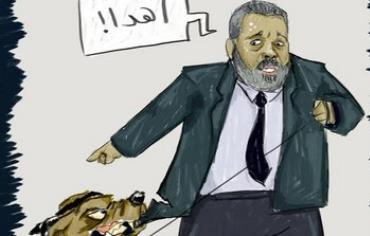 Palestinian cartoonist has come under fire because she published a cartoon that enraged Hamas and Islamic Jihad.

The controversial cartoon refers to Hamas efforts to rein in Islamic Jihad&#8217;s military wing, Al-Quds Battalions, whose members are believed to have been behind recent rocket and mortar attacks from the Gaza Strip.

The cartoon by Majedah Shaheen depicts Hamas Prime Minister Ismail Haniyeh asking his dog to &#8220;calm down.&#8221; The dog represents the Al-Quds Battalions.

&#8220;I wish to apologize for the cartoon I published about Hamas and the Al-Quds Battalions,&#8221; she wrote. &#8220;My intention was to relay a message in a clear and firm manner. But there are many who prefer to deal with the issue in an artificial manner instead of making an attempt to understand the idea behind it.&#8221;

CNN latest to be hacked by Syrian Electronic Army

Antifa is Just an Idea

On Podcast, Pelosi admits 2nd stimulus she promised in March is being stopped to hurt Trump

The debate accomplished nothing.
3 4 5