Extinction Rebellion isn’t about the Climate. It’s about Heteronormativity

Extinction Rebellion isn’t about the Climate. It’s about Heteronormativity
charles the moderator / 20 hours ago October 20, 2019

One of the founders of XR let’s it all hang out on this old Medium article.
First his credentials.

I’ve been with Extinction Rebellion (XR) from the start. I was one of the 15 people in April 2018 who came together and made the collective decision to try to create the conditions that would initiate a rebellion. I was a coordinator of one of the original five working groups, and I’ve been organising with XR day-and-night since then (frugally living off my savings so I don’t have to work, having quit an industry that paid me £1000/week). And I’ve been in RisingUp (the organisation from which XR has emerged) since the first RisingUp action in November 2016. I’m a RisingUp Holding Group member, and a member of the XR Guardianship Team.
And for the sake of transparency: that previous paragraph is all about me ‘pulling rank’ — I’m trying to convince you to listen to what I have to say…

And then he tells us the real problem.

The delusion of white-supremacy centres whiteness and the experience of white people, constructing and perpetuating the myth that white people and their lives are somehow inherently better and more valuable than people of colour.

The delusion of patriarchy centres the male experience, and excludes/hinders female assigned people from public life (reducing them to a possession or object for ownership or consumption). Patriarchy teaches dominating and competitive behaviours, and emphasises the idea that the world is a place of scarcity, separation and powerlessness.

The delusions of Eurocentrism include the notion that Europeans know what is best for the world.
The delusions of hetero-sexism/heteronormativity propagate the idea that heterosexuality is ‘normal’ and that other expressions of sexuality are deviant.

But let's not stop projecting let's double down on it and class warfare .... bam !

The delusions of class hierarchy uphold the theory that the rich elite are better/smarter/nobler than the rest of us, and make therefore better decisions

As they take money and are encouraged by the rich elite ....ferpderp

Extinction Rebellion isn’t about the Climate. It’s about Heteronormativity

Read it all ...and link to entire interview @
Extinction Rebellion isn’t about the Climate. It’s about Heteronormativity 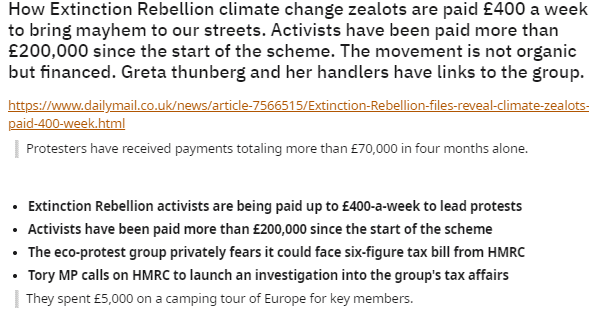 Any enterprise founded on ideology versus profit is doomed to self-destruction.

A group of ideologues get together to form a concern to impose a construct. It doesn't matter whether it's imposing an economic construct, like Communism, or a social construct like environmentalism.

Eventually, the people in charge of the the imposition will disagree on the final form of the vision. Or, they my disagree with what limitations for personal freedom they will have to inflict on the populace to achieve the vision.

We have seen key members of movements murdered, such as Jean Paul Marat in the French Revolution, Trotsky, Jian Qing (Mao's last wife), and many others. They are branded counter-revolutionary when they dared to disagree with the leadership on the vision.

The ouster of David Brower from the Sierra Club and Patrick Moore of Greenpeace, shows how founding or central members of the environmental movement are quickly cast aside when they question how the vision has evolved.

The same thing will, eventually, happen to XR. If your collective vision is a hostile-takevoer of society, eventually, your movement will have to purge itself of those not willing to destroy society in order to save it.
OP

You see em today doing it
Ellen sitting next shrub was the latest example
How long before they wanna kill Bill Maher .....tee hee
Over a century of the same ol same ol formula

Always the best part of left wing movements
And When they're violent .....Mass graves of useful idiots done in by thier own ....My personal favorite ....

Useful idiots are useful until they no longer are
I

*******Eventually, the people in charge of the the imposition will disagree on the final form of the vision. Or, they my disagree with what limitations for personal freedom they will have to inflict on the populace to achieve the vision.*******

excellent insight, FNCCEO seems like DA THING that destroys
ideologies and leads to assassinations
You must log in or register to reply here.

Why isn’t Graham investigating FBI/CIA and Biden corruption, instead of bitching about Syria?

B
Finally, A President Willing To Cut Off Boomers' Social Security And Medicare Charity
12 13 14

1 minute ago
bluzman61
B
View more…