A new seismic swarm started under Cumbre Vieja volcano (La Palma), the Canary Islands on February 10, 2018. Quakes in this latest swarm are stronger than those in the previous swarm in October 2017, the first swarm in this area in 30 years. National Geographic Institute (IGN) registered a total of 83 earthquakes between 23:23 UTC, February 10 and 07:32 UTC, February 15 with magnitudes ranging from 1.6 to 2.6. In addition, there have been several hundred more which weren’t detected due to their magnitude and depth.

All we can do is hope to hell this bs waits a few more hundred years.......

I believe this island that's getting these quakes can be deadly if part of it falls into the ocean causing a deadly Tsunami or tidal wave something along those lines. 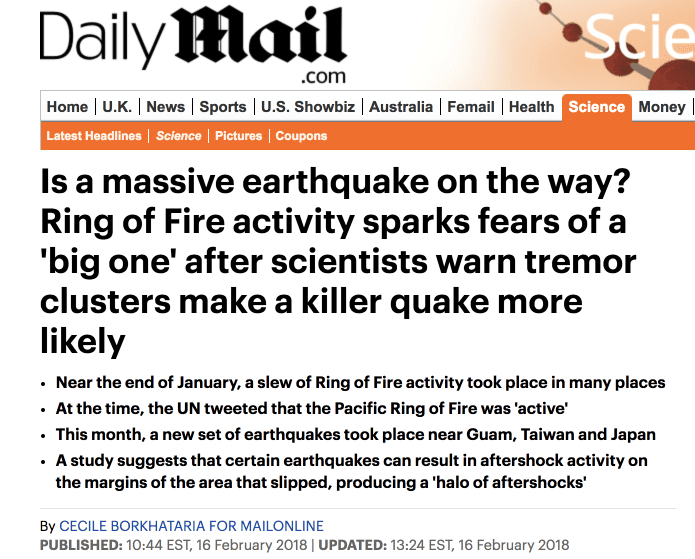 http://www.dailymail.co.uk/sciencetech/article-5400143/Is-massive-earthquake-way.html
“The Revolution won’t happen with guns, rather it will happen incrementally, year by year, generation by generation. We will gradually infiltrate their educational institutions and their political offices, transforming them slowly into Marxist entities as we move towards universal egalitarianism.” – Max Horkheimer

Biblical prophesy being fulfilled.
Let the redeemed of the Lord say so.
You must log in or register to reply here.

LIVE: Volcano erupts on La Palma in the Canary Islands
5 6 7

R
The nature of the winds

A rare Pacific footballfish, a deep-sea anglerfish usually found at ocean depths of more than 2,000 feet, was found on a beach in San Diego