One thing that makes me think some...is the lack of rainfall the last few years where I live.

I've seen some articles on how Australia is feeling the wrath of little rainfall big time.I'm not a specialist in global warming...but beyond a doubt some regions are turning upside down with either warming..or little rain.

Being I admire a good looking vegetable garden...and care about our lakes..makes me think alot on this.Having whole communities go through big changes is an eye opener in itself.

I don't think there is nothing to stop this effect...I think even the Earth itself even without our help is making its way to a big change...Did we cause this..or help it along?...Trying to fix this..is like trying to control the weather...(auuugh).

Do you think there are plans on trying to use the oceans salt water..and convert it in the future?...Australia has to have something on the drawing board to make the means....Conservation is just a temporary fix maybe....

One of the issues with the drought in Australia is that the farmers us these huge diesel pumps to irrigate the crops and they are depleting the ground water much like what is done in Texas and other states. Salt Water Desolation has been used for years in the middle east and now in Australia. It is relatively easy to do and stations can be set up anywhere there is saltwater.
OP

Sure would be interesting to know what the costs would be...vice versa say big rivers..or wells going about the way we do now...I'd be bumbed if they got on my case about veggie gardening...(smile)...I can't veggie garden here though...but still pretend I do...LOL..

Our Lake Levels seem to go down each year too....One thing is for sure...Species..and our enviroment will change...but it's been changing since the begining of time I guess.

I got that movie Joe Dirt...I may just watch that tonight..Now that guy could get some pretty cute girls...(smile)...One cool dude..

Well I'd first say it has to do with supply and demand and how feasible it would be if you lived a great distance from the ocean. I used to live in Northern California and Lake Shasta was always low due to drought. And last summer I spent my time in the D/FW area and they were very dry and some lakes were really down low. Maybe more work should be done to collect water from rains or retreat water from runoff from storm drains and use it for crops? I'm sure someplace in the world a think tank has round tabled ideas to offset the amount of water used and consumed.
OP

My experience now with water..is way different than last year living in a town with runing water.(Indoor Plumbing).

So I guess conversation does play a big role in our water supply as well.

You're right...catching water & harnessing rainfall would help also.(BIG TIME)..To tell you the truth..I showered everytime it rained last year using what came off the roof.

I now haul water up from a well..and bath,wash..and do dishes that way..My consumption has gone down 1000% because I conserve it...Not so out of waste...but the hassle it is bringing it up to the cabin...I put every drop to good use..It's something we all take for granted I guess...(I'm Guilty Too)..

The area I live in now is all pretty much on wells. I had to have a 400 foot artesian well put in because my shallow well of 40 years was running dry. I know I could be more sparing with my use, but I'm not I pretty much lived on well water all my life and it is so much more healthier in many ways, less the floride in city water. The other area of reuse can be the sewage water once it has been treated in the final stages at the treatment plant. It could be used on or hay or sod fields and that would help reduce the need for water consumption. This is going to be a big issue i'm sure in about 20 years if not sooner. The deal in australia kind of alarms me since Australia doesn't have near the population the US does.
OP

I could of been more sparing too...So don't feel bad.I've been guilty more than once leaving the garden hose on over night...and many times used a gallon just to wash a spoon..(smile)..We're really not guilty of wasting it..when it always felt/feels like a limitless supply in some cases..(geography).

They'd only do those water ban things after a small drought where I grew up...But other than that it was like no worry..Only worry was the water bill..I can just imagine if water was free for most...Imagine waste then..ha?...(smile)

But yea...Austrailia has 100 year plans for dealing with the water shortage..and from what I read it didn't look like a new source would ever come into play to ever make things the way they were...I love things so green..

I can see the farming folk really taping there wells to the limit..but many depended on rain for generations..and that has been so sparadic in many parts over the world.

Your right...Australia is a good example now watching all this come into play...I sure would be bumbed if I lived somewhere where the ground was so parched it looked like the face of Mars.

When it comes to enviromental issues...drought may be the thing that gets us all...Where I live now has lots of water..but I notice when lake levels are low...and I get so bumbed that we don't have the rains like we use to have...I guess this is also suppose to be the hotest year on record...ouch..

Should be an interesting summer...that's for sure.
W

UN: Early Weather Forecasts Key to Saving Lives in Drought
June 19, 2017 — With droughts set to become more frequent due to global warming, delivering timely, long-term weather forecasts to farmers in the developing world will be key to limiting damage and saving lives, the head of the U.N. food agency said on Monday.

Droughts have killed more than 11 million people worldwide since 1900 and now affect double the land area than in 1970, according to the U.N. Food and Agriculture Organization (FAO). Developing countries are the most exposed, with their agricultural sectors shouldering 80 percent of all damage caused by drought, FAO says. Better access to reliable weather data and early warning systems could help farmers in rural areas get ready to endure long spells of no rain, said FAO director-general Jose Graziano da Silva. "Most of the times poor rural communities in developing countries don't even know that a drought is about to strike," he told a conference at the FAO headquarters in Rome.

Measures such as planting resistant crops and building water reservoirs can greatly reduce the impact of droughts, but international responses too often focus on emergency relief, said Graziano da Silva. "People die because they are not prepared to face the impacts of the drought - because their livelihoods are not resilient enough," he said. 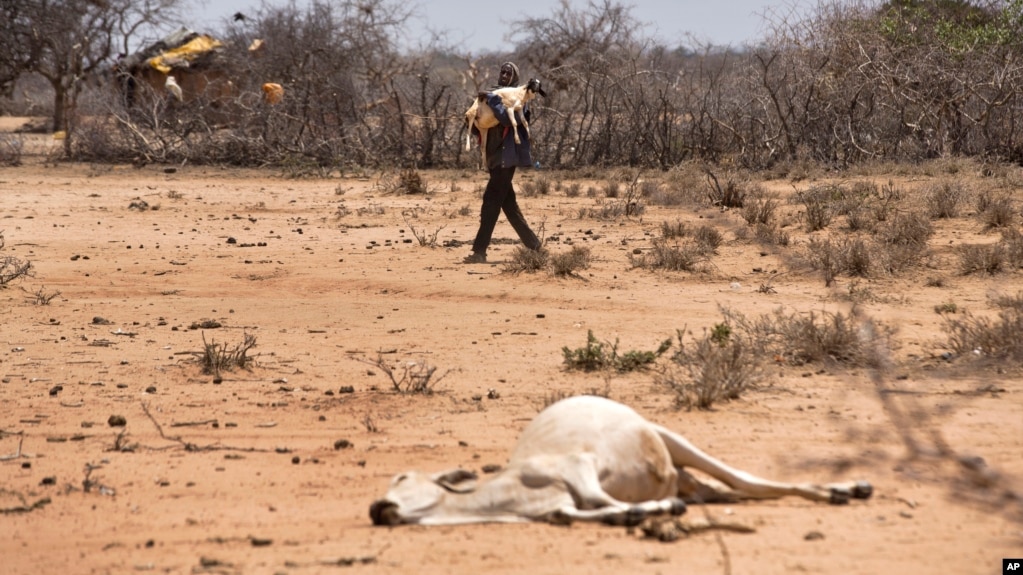 A man carries his sheep past the carcass of a dead cow in the drought-affected village of Bandarero, near Moyale town on the Ethiopian border, in northern Kenya​
In Rome, FAO and the World Meteorological Organization (WMO) signed an accord to increase cooperation in the face of climate change, improving agro-meteorological services to help small farmers prepare for droughts. WMO secretary general Petteri Taalas said weather forecast accuracy had greatly increased in recent years thanks developments in satellite, computing and scientific research. "Weather forecasts are not anymore a joke, they are something you can very much rely on," he told the conference.

Know-how related to long-term forecasts and prediction of major climate events like El Nino had to be shared between rich and poor countries, he added. The last El Nino, a warming of ocean surface temperatures in the eastern and central Pacific that typically occurs every few years, subsided in 2016 and was linked to crop damage, fires and flash floods.

For Algeria's Struggling Herders, ‘Drought Stops Everything'
October 12, 2017 — Squinting under a relentless sun, Houssin Ghodbane watches his son tend a flock of 120 of their sheep. Heads bowed, the sheep slowly search for sparse vegetation poking through the parched, crunchy soil.

Fifty-year-old Ghodbane, his tanned face etched with deep lines, has been herding sheep for 20 years, having inherited the job and land from his father. But in this dry region, worsening cycles of drought are posing new challenges to an old profession. According to a report Algeria developed as part of its contribution to the 2015 Paris Agreement on climate change action, average annual rainfall in the country has fallen by more than 30 percent in recent decades.

The country is also facing higher temperatures. Summer heat has soared in Batna province, in northeast Algeria, climbing from a maximum temperature of about 100 degrees Fahrenheit in 1990 to more than 107 degrees Fahrenheit (41 degrees Celsius) in 2017. For Ghodbane, that means his land now lacks enough fodder for his flock in drier seasons so he must purchase extra feed, at added expense. In addition to selling his sheep for meat, he used to earn profits by selling animals to other herders expanding their flocks. 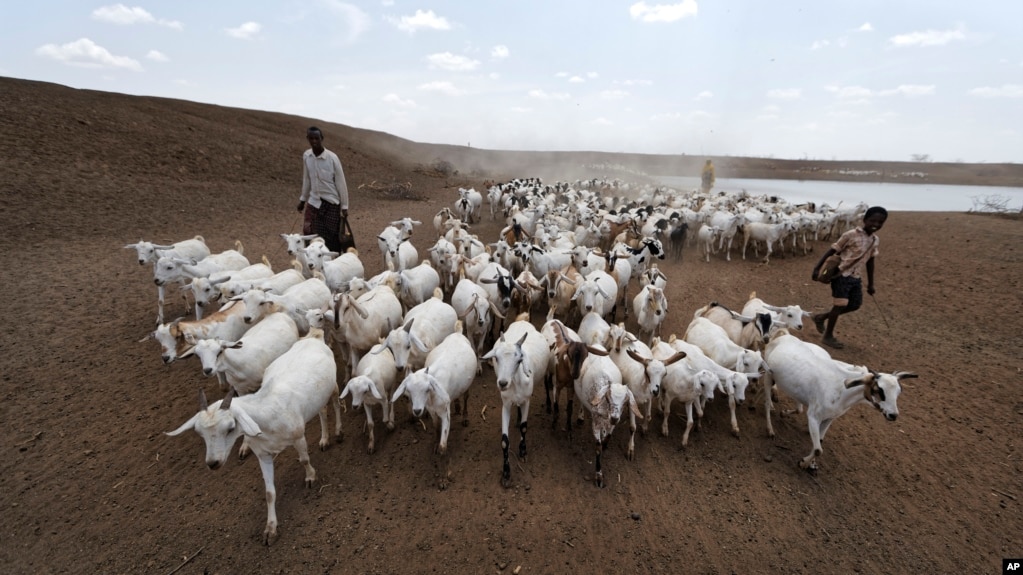 A herder drives his animals away after watering them at one of the few watering holes in the area, near the drought-affected village of Bandarero, near Moyale town on the Ethiopian border, in northern Kenya​
Those sales have stopped, as worsening heat and drought make herding less viable — and Ghodbane has had to limit the size of his own flock due to the increasing costs of caring for them. “Drought stops everything,” he said. The solution to his falling income is simple. “Rain. That’s it,” he said.

Algeria is not a big emitter of climate-changing gases such as carbon dioxide, methane and nitrous oxide. But warming driven by emissions from around the world is having big impacts here, including more extreme weather conditions. “You don’t have to be a source of emissions to be affected,” noted Adel Hanna, a climate modeling expert at the Institute for the Environment at the University of North Carolina at Chapel Hill. “That’s why we call it a global effect.”

Hanna, who is from Egypt, said that the two biggest climate worries for North Africa — water scarcity and higher temperatures — are feeding off each other, with limited rainfall rapidly evaporating from the soil in higher temperatures. “The net effect is the loss of water resources,” Hanna said. “something that affects all forms of agriculture, including grazing for livestock. For Ghodbane, drought has meant that he needs to water the wheat and barley he also grows using an irrigation system — something that takes time and money. He said he is becoming more heavily dependent on well water as rainfall disappears.

Herders turn to wells for water
Click to expand...

Chinese Year of the Pig

Before You Claim A Democrat Victory In The Election....
6 7 8