WASHINGTON  President Obama anticipated Republican resistance to his jobs program, but he is now meeting increasing pushback from his own party. Many Congressional Democrats, smarting from the fallout over the 2009 stimulus bill, say there is little chance they will be able to support the bill as a single entity, citing an array of elements they cannot abide.

Democrats like Senator Mary L. Landrieu of Louisiana, who does not want the oil industry singled out for tax changes, object to parts of the bill. The White House has opposed breaking it up.

I think the American people are very skeptical of big pieces of legislation, Senator Bob Casey, a Democrat from Pennsylvania, said in an interview Wednesday, joining a growing chorus of Democrats who prefer an à la carte version of the bill despite White House resistance to that approach. For that reason alone I think we should break it up.

Senator Harry Reid of Nevada, the majority leader, has said he will put the bill on the legislative calendar but has declined to say when. He almost certainly will push the bill  which Mr. Obama urged Congress to pass right now!  until after his chambers recess at the end of the month; Mr. Reid has set votes on disaster aid, extensions for the Federal Aviation Administration and a short-term spending plan ahead of the jobs bill.

Republicans have focused their attack on the tax increases that would help pay for the spending components of the bill. But Democrats, as is their wont, are divided over their objections, which stem from Mr. Obamas sinking popularity in polls, parochial concerns and the partys chronic inability to unite around a legislative initiative, even in the face of Republican opposition.

Some are unhappy about the specific types of companies, particularly the oil industry, that would lose tax benefits. I have said for months that I am not supporting a repeal of tax cuts for the oil industry unless there are other industries that contribute, said Senator Mary L. Landrieu of Louisiana.

A small but vocal group dislikes the payroll tax cuts for employees and small businesses. I have been very unequivocal, said Representative Peter A. DeFazio, a Democrat from Oregon. No more tax cuts.

His voice rising to a near shriek, he added: We have the economy that tax cuts give us. And its pretty pathetic, isnt it? The president is in a box.

There are also Democrats, some of them senators up for election in 2012, who oppose the bill simply for its mental connection to the stimulus bill, which laid at least part of the foundation for the Republican takeover of the House in 2010.

I have serious questions about the level of spending that President Obama proposed, said Senator Joe Manchin III, a Democrat from West Virginia, in a statement issued right after Mr. Obama spoke to a joint session of Congress last week.

While Mr. Reid, who is known for trying to protect Democrats from casting tough votes, may be delaying the bill to insulate his party, the White House has a tacit agreement with Senate Democrats that Mr. Obama be permitted to take his American Jobs Act around the country to try to sell it to voters. The White House is to brief Democratic senators on the granular aspects of the proposal on Thursday.

The White House does enjoy support from many Democrats still. I am so happy to hear them talking about the most important thing, which is jobs, said Senator Debbie Stabenow of Michigan.

As he barnstormed again on Wednesday, Mr. Obama told voters in North Carolina, If you love me, youve got to help me pass this bill, but even some members of Congress from that state may prefer to stay just friends.

Senator Kay Hagan declined on Wednesday to say her support for the bill that Mr. Obama spent the day promoting in her state was indubitable. Weve got to have legislation that is supported by Democrats and Republicans, she said. Im going to have to look at it. 

Representative Heath Shuler, another North Carolina Democrat, said Congress should tame the deficit before approving new spending for job programs. The most important thing is to get our fiscal house in order, said Mr. Shuler, a leader of the fiscally conservative Blue Dog Coalition. Then we can talk about other aspects of job creation.

Earlier in the week, David Axelrod, the presidents top political adviser, said in an interview with Good Morning America that the White House was not in negotiation to break up Mr. Obamas bill, and that Congress would not have an option for an à la carte menu.

But it is very likely that the bill will be cherry-picked for items that appeal to large swaths on both sides of the aisle, like the payroll tax cut and a job training program for the unemployed.
Click to expand...

So Obama goes in with an ALL or NONE ideology on this bill--knowing full well it does not meet the muster of the house and or many democrats within the house or senate.

Now you LIBERALS explain to me again how concerned Obama is about creating JOBS in this country--when it is more than obvious he is only using his plan as a political tool for his reelection campaign strategy. 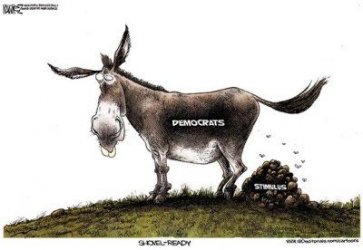 oh oh, not looking good for the Obama if this came from the NYslimes..
"A nation can survive its fools, and even the ambitious. But it cannot survive treason from within. An enemy at the gates is less formidable, for he is known and carries his banner openly. But the traitor moves amongst those within the gate freely, his sly whispers rustling through all the alleys, heard in the very halls of government itself."
Tullius Cicero (106-43 BC)
--------------------------------------------------------------
George Washington :
“However [political parties] may now and then answer popular ends, they are likely in the course of time and things, to become potent engines, by which cunning, ambitious, and unprincipled men will be enabled to subvert the power of the people and to usurp for themselves the reins of government,
You must log in or register to reply here.

How does the left justify spending $4.8 million for ONE green job?

J
Where Is The Master Legislator McConnell?

Biden, Pelosi, and Schumer will get their $3.5T "infrastructure" bill

An old Trumper speaks out.
2