Damn! Tell me this cartoon isn't dead on...

AzogtheDefiler said:
He specifically said that Neo Nazis and the white supremacists should be condemned totally and he is not speaking about them in the same speech. I posted A link to the verbiage. You’re busted lying so now you must leave the site. Adios.
Click to expand...

Again, standing near Nazis, does not make you a very fine person. No excuses, you leave.
Click to expand...

Who said they were near them? And maybe they did leave. But initially before the Klan arrived they were there peacefully. Stop dodging. I got You.
Click to expand...

Where were they? You lied earlier by posting a picture of a different rally of people counter protesting another group of deplorable and claimed they were actually the "very fine people" Trump was talking about in Charlottesville. I don't believe you've owned up to that yet.
Click to expand...

Lied? I googled Charlottesville and posted that pic. YOU LIED because you didn't tell the whole story and backpedaled later. You're filth.
Click to expand...

Oh, then you're dumb, it was obviously Washington DC and didn't appear to be pro-Robert E Lee statue protesters either.

You did. You didn't state the actual quote. I posted numerous links and quotes that show I am right and you're a dumbass Leftist. 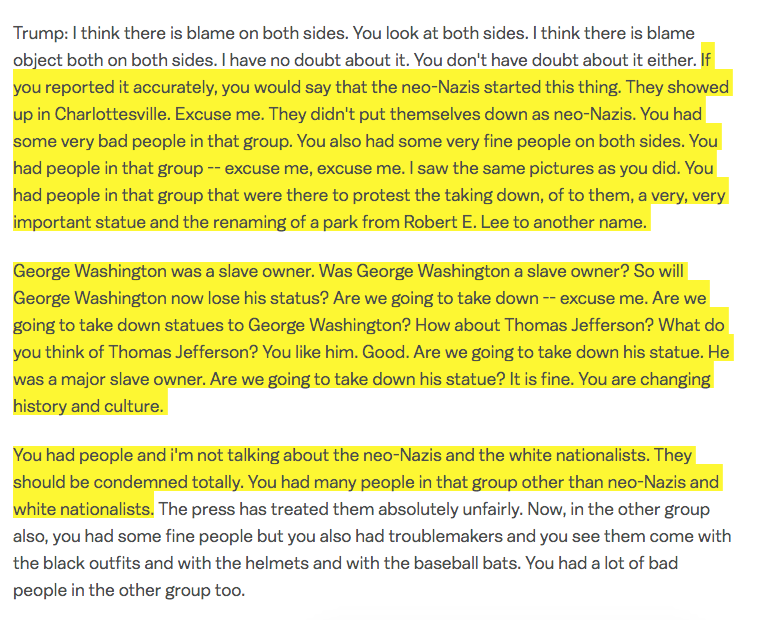 Where did he say "white supremacists and neo nazis were fine people"?

Nowhere. You made it up and now you're back tracking. So sad.

To be fair..he didn't make it up. The media made it up and he bought it.
Click to expand...

Then do your research.
You must log in or register to reply here.

B
The right wingers are starting to lose it