According to the Head of anti-trafficking at Catalonia police, Xavier Cortes, British airports including Gatwick are often used as entry points by the Eiye cult group to smuggle Nigerian women into Europe for forced sex trade.

Cortes revealed in an interview with the BBC that the group had been ‘using forged documents and passports to fly its Nigerian victims into places like Gatwick.’

He was quoted by the BBC to have said that the Nigerian cult group were possibly being aided by Nigerian officials in obtaining British passports.

“These (fake) documents are expensive, though, and need the cooperation of people working in the government to get,” Cortes told BBC.

The BBC further reported that most of the women being trafficked by the Supreme Eiye Confraternity are from Nigerian towns and cities, including Benin City.

One of the sex-trafficking victims, was quoted to have said: “I did not know I would be beaten and raped and have to have sex every night of the week.”

The report further added that a recent raid on the Supreme Eiye Confraternity in Barcelona took 18 months of planning and resulted in 23 arrests.

The BBC report added that the “SEC has hundreds of members running operations out of Ibadan, about 100 km (60 miles) northeast of the Nigerian city of Lagos.”

Women were recruited from China by a Chinese gang that promised them jobs as au pairs or masseuses in Austria. Police say the victims had to pay up to €10,000 (£8,600;$10,750) for Austrian entry visas and were forced to hand over their passports. 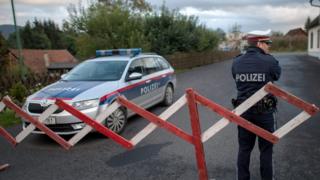 An Austrian police officer blocks a road next to a crime scene in Trofaiach, Austria​
They were kept under constant watch and their earnings were confiscated. Investigators say gang members threatened the women with violence if they tried to leave.

The women were also transported around the country to work in different brothels after working in Vienna for a period of time. Police searched more than ten houses and found counterfeit IDs and money, a gun and €30,000 in cash.

The miscreants and villains exposed ... Trump’s Legal Team Is a Wretched Hive of Scum and Villainy
2

Who Is Being Hospitalized For Covid-19? The unvaccinated
2 3 4

Progressives want to tighten screws beyond Manchin and Sinema

How many African-Americans were killed in WWI?
3 4 5