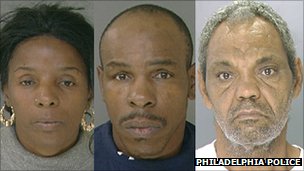 The three suspects are charged with criminal conspiracy and kidnapping

Three suspects have been charged with chaining four mentally disabled adults in a basement in Philadelphia and collecting their disability benefits. Police found the victims after investigating reports of squatters. The room was too low to stand up in, one victim was chained to a boiler, and the only food in the room was a container of orange juice, police said. One suspect, Linda Ann Weston, previously served eight years in prison for starving a man to death in 1981.

Police officially charged Weston, 51, Gregory Thomas, 47, and Eddie Wright, 50 with multiple charges, including criminal conspiracy, kidnapping and aggravated assault. Authorities are looking into additional federal charges, a spokesman told the Philadelphia Inquirer. "We're going to find every crime possible in the crime code to put on these individuals," said Lt Raymond Evers. The adults found in the basement have the mental capacity of 10-year-olds, police said. They ranged in age from 29 to 41. Once found, they were taken to hospital and listed as being in a stable condition.

Turgut Gozleveli, the owner of the Philadelphia building, told the Philadelphia Inquirer he checked out the basement after neighbours complained of suspicious people. When he failed to find anyone in the basement, he followed the sound of a barking dog to a room under the basement, where a chain was wrapped around a door handle. Inside he saw two small dogs and blankets, and then people's faces. "It was terrible," he said. "Something I never expected to see in my life." He then called police, who found the adults in the 15ft by 15ft (4.5m) room, surrounded by buckets of their own excrement.

According to police interviews with the captives, they had been brought to Philadelphia about 10 days before they were found, having been in West Palm Beach, Florida, and Texas. Linda Ann Weston and Eddie Wright recently lived for about two months at a home in West Palm Beach, stripping it of wire and plumbing and smearing faeces on the walls, according to a report by the Palm Beach Post. Previously she served eight years in prison for starving to death 25-year-old Bernardo Ramos. Ramos had refused to support her sister's unborn child. She held him in the closet of their Philadelphia apartment in 1981 for two months, feeding him only three times, according to reports.

Weston spent time in prison during the 1980s...

A 19-year-old, the niece of suspect Linda Ann Weston, was found locked in a cupboard suffering from open wounds. A tip from Florida officials led police to the children around Philadelphia. Weston and three other suspects are scheduled to appear in court next week to face charges of imprisoning mentally-disabled people. She has previously served a prison sentence for starving a man to death. The niece, Beatrice Weston, was taken by her aunt at the age of eight, according to Philadelphia police spokesman Lt Ray Evers. She is now recovering in a local hospital.

Police told ABC News that two of the the children, aged two and five, belonged to a mentally disabled couple who were held captive by Weston for years. Those children were severely malnourished, police said. The two-year-old looked like a six-month-old when found, Lt Evers said. He suggested authorities would seek the harshest possible prosecutions against the suspects. "We're going to prepare to prosecute this here or, without hyperbole, wherever the prisons are going to be the worst. Federal prisons might be too nice," Lt Evers said.

Linda Ann Weston, Gregory Thomas, 47, and Eddie Wright, 49 were arrested over the weekend after police found four mentally-disabled adults locked in a small basement room with only orange juice. Police allege the suspects stole disability benefits from their victims. An anonymous source told the Associated Press that authorities were considering charging the suspects under a hate-crime law - which could lead to potentially longer jail terms in the event of a conviction.

Racialism at the DOJ

Why do some Democrats want to pass new laws against violent crime, intead of enforcing the laws that are already on the books?
2 3

Why we have gun crime....Chicago edition. Get Used to this kind of crime, the democrats just don't care to help you.
2

Whitlock: Ignoring the concerns of Trump supporters will destroy America
2 3

A moment ago
Ringtone