In light of the dramatic drop in oil prices President Barack Obama should do a reassessment about the Keystone Pipeline and support it. This drop has highlighted that the world has an oil supply problem, that is, there is too much supply relative to demand which is driving down price. The really unfortunate thing is that this problem isn't going away unless the worlds three key producers cut a deal to control production; Russia and Saudi Arabia which produce around nine million barrels of oil a day and Iraq which produces around four million but has reserves to produce around nine million barrels a day need to agree that if need be to raise prices to a good level Russia and Saudi Arabia will each take up to three million barrels of oil a day off the market and Iraq will max out their production at six million barrels a day. Such a deal has an extremely low probability of occurring to the point where it is not a foreseeable outcome because all three countries desperately need oil revenue.

The problem this presents for America is that low oil prices will reduce shale oil production throughout America because the cost to do such production is so high that low oil prices don't leave a good enough profit margin for shale producers so they need to cut back production. The problem this presents for the President and his party is that this will lead to spot spikes in gasoline prices for consumers throughout America as their local refiners lose their normal sources of oil supply and have to pay much higher prices in the open market. This will leave consumers in these affected spot markets mad because they have to pay higher prices and believing the Democrat Party doesn't have a good energy policy. Approving the Keystone Pipeline will bring more oil supply into America thus lessening the possibility where oil refineries in various spots throughout the country are paying extraordinary high prices for oil or can't get it at all and it will increase the supply of gasoline and processed petroleum products from the Gulf coast refineries for large swaths of the American people that can be served from those refineries. Democrats also should keep in mind that shale producers have cut their capital spending for 2015, many of their production price hedges expire at the end of 2015 - so come 2016 shale producers will have more incentive to let oil shale production fall during this period the U.S. economy will continue healing so oil demand will pick-up very possible resulting in the three to four months preceding the 2016 Presidential elections the American people seeing spot gasoline price spikes throughout the country not very helpful for the Democrat Presidential candidate.

One prior criticism President Obama has mentioned for not approving the Keystone pipeline line is that this pipeline is about bringing Canadian oil to American refineries it is not about moving American oil to American refineries; his attitude is like keep you're garbage in Canada you Canadians don't send it over here to America. Mr. President you really need to rethink that criticism because in 2014 American doubled the amount of garbage I mean oil it sent to Canada from 2013 in 2014 America sent over one-hundred million barrels of oil to Canada. Moreover, to America's good fortune Canada doesn't take the parochial perspective about oil consumption that the White House does the Canadian company TransaCanada is pursuing building the Upland Pipeline project which is a project to build a 200 mile pipeline from North Dakota into Canada which could move up to 300 thousand barrels of American oil a day into Canada providing a nice market for North Dakota oil producers.

KXL is about moving U.S. production to refineries. It's a fact that's been conveniently buried by Liberals.
W

Why is Obama against American energy independence...

U.S. will not pause Keystone review; Obama expected to reject
Wed Nov 4, 2015 - The United States formally denied a request on Wednesday to pause the review of the proposed Keystone XL oil pipeline, a decision expected to lead to the project's rejection by the Obama administration.

TransCanada Corp's request to the State Department for a delay was seen by many as an attempt to postpone the decision until after President Barack Obama left office and a new president more friendly to the plan took over in 2017. The White House declined to comment on the State Department's decision. Secretary of State John Kerry has not given a timeline for making a recommendation on the $8 billion project. "The secretary believes that, out of respect for that process and all the input that has gone into it, that it is the most appropriate thing to keep that process in place, to continue the review," State Department spokesman John Kirby told a news conference on Wednesday. The State Department must issue a recommendation because the project crosses the border with Canada. 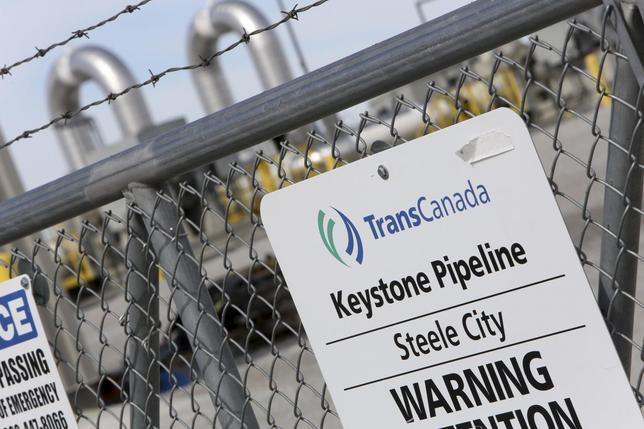 A TransCanada Keystone Pipeline pump station operates outside Steele City, Nebraska​
Since it was proposed seven years ago, the pipeline has been the heart of a struggle between environmentalists opposed to oil sands development and defenders of fossil fuels. The nearly 1,200-mile (2,000-km) pipeline would carry 830,000 barrels a day of mostly Canadian oil sands crude to Nebraska en route to refineries and ports along the U.S. Gulf Coast. Senator John Hoeven, a Republican from North Dakota who has been a major proponent of the project, believes Obama will turn down the project before the climate change summit in France in December. “The administration basically holds this project up for seven years as a way to defeat through delay,” Hoeven said. “Now the company asks for a year delay to complete the work in Nebraska, and the Obama administration says no. That clearly shows that they intend to turn down the project.”

Even if Obama kills Keystone, Hoeven believes the project will be approved quickly on its merits if a Republican takes over the White House in 2017. All the Democratic presidential hopefuls, including front-runner Hillary Clinton, oppose the project, while most of the Republican presidential candidates support it. Newly elected Canadian Prime Minister Justin Trudeau, who was sworn in on Wednesday, has supported the Keystone XL pipeline, while pledging to improve Canada's climate change record. TransCanada said it respects the State Department's decision and will continue to press for approval. "The fundamental question remains: Do Americans want to continue to import millions of barrels of oil every day from the Middle East and Venezuela or do they want to get their oil from North Dakota and Canada through Keystone XL? We believe the answer is clear and the choice is Keystone XL," said TransCanada spokesman Mark Cooper.

Granny wantin' to know what dey gonna do with all dat pipe dey bought?...

“America is now a global leader when it comes to taking serious action to fight climate change,” Obama said in remarks from the White House. “And, frankly, approving this project would have undercut that global leadership.” According to the State Department’s January 2014 Final Supplemental Environmental Impact Statement, greenhouse gas emissions will actually increase without the Keystone pipeline if the crude oil from Canada is alternatively transported by rail across the U.S.

Miles of pipe ready to become part of the Keystone Pipeline are stacked in a field near Cushing, Okla.​
“During operation of all No Action rail scenarios, the increased number of unit trains along the scenario routes would result in GHG emissions from both diesel fuel combustion and electricity generation to support rail terminal operations (as well as for pump station operations for the Rail/Pipeline Scenario),” the statement stated. “The total annual GHG emissions (direct and indirect) attributed to the No Action scenarios range from 28 to 42 percent greater than for the proposed Project.”

However, data from the Department of Transportation’s (DOT) Pipeline and Hazardous Materials Safety Administration (PHMSA), shows TransCanada’s 1,179-mile pipeline from Alberta, Canada to Steele City, Neb., would have represented only a small fraction of the approximately 66,679 miles – or 2 ½ times the Earth’s circumference -- of crude oil pipelines operating in the United States. The total mileage of all pipelines in the U.S., including crude oil, other liquids and natural gas is 2.6 million, according to PHMSA.

Alabama, Arkansas, who's next to defy SCOTUS?

A moment ago
woodwork201
W

What the Chauvin trial reveals.
5 6 7

Gun experts: Is there a gun that fires bullets that incapacitate but do not kill?